January 6, 2012 - Visual poet Matt Stolte mailed me a copy of Cr ch, his new book. I am absolutely thrilled to have this beautifully produced edition that is a longer sequence, much more comprehensive than smaller mail-art pieces I have received from him.

In the area of vispo, the network has long provided a way to share work and ideas on an international level. Cheryl Penn (South Africa) and I are currently coordinating a visual poetry collaborative book project through the IUOMA. We're very lucky Matt has agreed to contribute a chapter. Some excerpts from Cr ch will contribute to ongoing discussions about approaches to composing vispo. Here is a two-page spread from Cr ch: 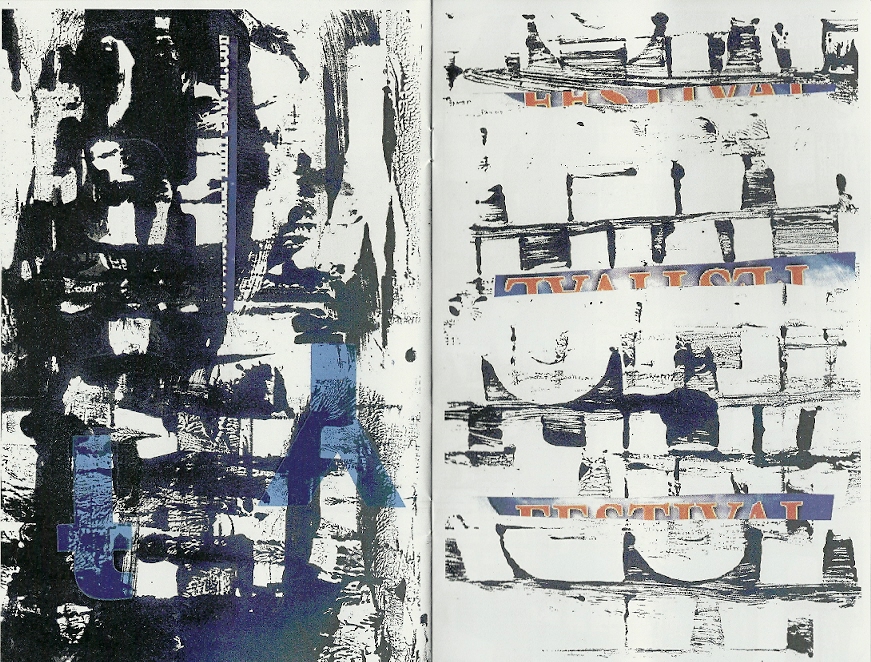 In this book, I believe Matt's work shows visual poetry's roots in concrete poetry. The foundation of the poems is the alphabet, words, and typography. They are employed as an expressive material, divorced from conventional reading. The use of what appears to be physically made collage (a nod to action art) is not disguised, rather it is pronounced and gives the work a dynamic quality.

A high degree of distortion is used through typographical (technical) manipulation and collage. The result is the achievement of the real ground of visual poetry: a synthesis of text and image. Matt's poems are filled with numerous, subjective images that constantly shift and change with each encounter. Words and phrases appear, fade, and meld in and out of images. This dynamic quality does obscure the fact, somewhat, that the structure of Cr ch is built upon the linearity of written and printed text, often morphing into familiar grid structures. Yet the dynamism, the spontaneous action art mode, prevents Cr ch from falling into sterile formalism. Here is another excerpt: 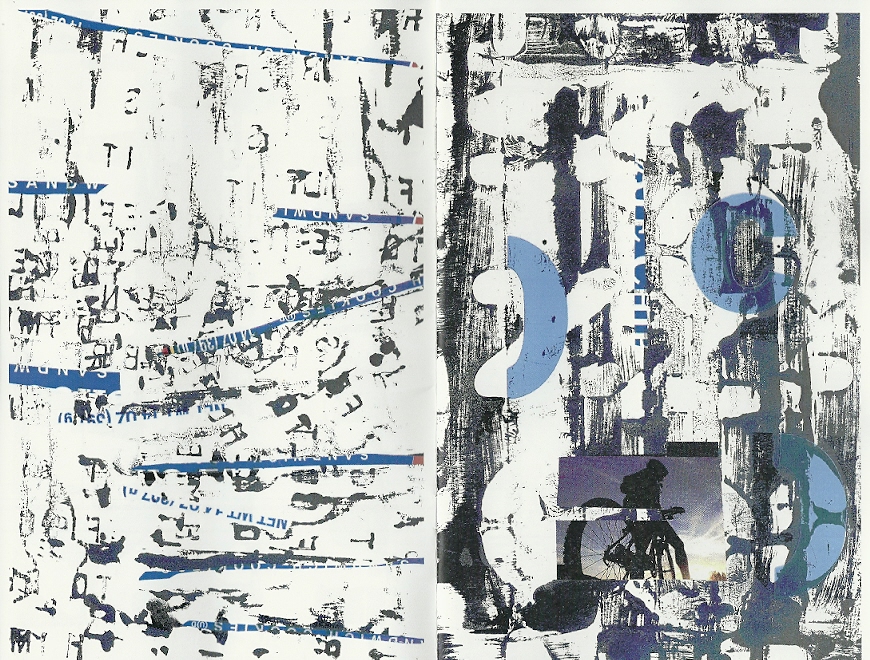 The textuality of Cr ch is revealed on the left-hand page. The right-hand page provides an example, fairly rare in the edition, of a visual image (the bicycle) integrated with the work. From all I have seen so far, visual poets work with combinations of image and text in varying degrees. As stated in previous blogs, some vispo only uses visual images. Being primarily a writer, I tend to favor vispo that still uses text. That's one of the reasons why I am such a big fan of Matt's work.

Beyond formal and technical concerns, what might one say about what Matt is expressing as a poet? For me, his is ultimately a bleak vision. The title of the blog refers to Vis-consin. That is because the US State of Wisconsin is a huge center for visual poetry. Matt's work affirms the vision of another poet currently in Wisconsin: David Baptiste-Chirot. Chirot has extended the darker visions of Kafka, Poe and Melville into visual poetics.

Matthew Stolte is also, I believe, of that existential and ultimately brooding American sensibility. His work is far more abstract than Chirot's, however. The sudden, vivid, jarring nightmare images that coalesce in Chirot's work and make it so powerful are absent in Stolte's and are replaced by the strange, associative, half-conscious stream I mentioned previously. Both Stolte and Chirot work with the primal roots of language yet both are free of the postmodern obsession with language as an end in itself.

Cr ch is mostly composed of black, blue, and white, which narrows the artistic expressiveness provided by vispo to a minimalist field in the work. Through repetition, arrangement, and color selection, Stolte seems always to return in his work to industrial production: mechanistic and inevitably sinking into decay - a reflection of the Rust Belt environment?

Many of the forms have the quality and hardness of metals that are, paradoxically, transmuting into frightening semi-organic shapes: Yet another nightmare vision of techno-capitalism and, perhaps if his work were explored even further, an exploration of the evolution of technology, language, and humanity as they intersect. Here is a final page spread with information about the book: Reed Altemus is a Fluxus artist whose work, including performances of event scores, is known by many in the network. I discovered his asemic work when I was doing research for the Asemics 16 Project. He has been publishing and documenting vispo for many years and has fascinating material, especially from the Age of Xerography. A visit to the Tonerworks blog is definitely worthwhile:

Matthew Stolte's blog is a must-see for vispo, especially work from Vis-consin:

Many, Many thanks Matt. The best I can do right now is to send an Elgin Shroud shred, but maybe you should consider the DKULT.

Hi Matt, I'm glad you were able to do a drive by to see the blog. Given that we're dealing with so many time zones and people involved with so many different things, it's a wonder anyone ever gets on the same page.

These IUOMA blogs, I think, are always great because the recipients can explain how they respond to the work and then the sender can talk about their perspectives, intentions, methods - it opens up the process of interpretation. So thanks for providing the documentation about how you work.

And, of course, thank you for the book. It's a keeper for sure.

DVS - just sped read yr post - Many Thanks - yr quality commentary is the reason i send Cr ch in the 1st place.  I will respond soberly in futch.  one off the top tid bit b 'bout the "rust belt".  whereas the belt may be a rusty source i do not mean my works to reflect per se but rather as sound, words in air a poet riffs off of i pick-up materials riding my bike - broken car parts with lettering - & likewise use.  many of the works were made with license plates partially taped with masking tape.  what can reflect the state of the states more than license plates?  cars/ prison.  but riding/ commuting on bike is extremely positive physically, mentally & environmentally.  in reverse order.

Revolution of the Spell Chicks! Load your pickles.

Angie, I just saw your comment about word and letter repetition. I once was talking to a literary theorist type and was talking about repeated words as typos. She explained those word repetitions are "surplus signification" that represent surplus labor in a capitalist economy. I withhold judgement.

Clearly the Spell Chick is snoozing at the switch again. However, your typo rate seems a bit higher than average. I should talk?

Glad to hear you received a copy of Matt's book too. A perfect time for the vispo project.

O, I'm laughing :-))) - I am in danger of repeating myself lately - I think I said so on collaborative books :-))... Its HOT and evnerythings melting - thats the only reason I can come up with, can come up with :-))X

Thanks for starting my day with some poetry Cheryl:

So: "You are welcome welcome."

I am REALLY glad  you blogged this - I have also received also received one of these books and could NEVER have written as succinctly as you - so thank you for the great commentary.  For sure we're lucky :-) XX