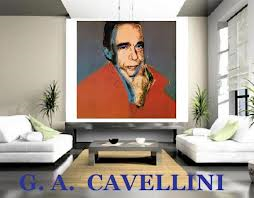 On the centenary of the birth of the unique and innovative , freelance bresciano artist  disappeared in 1990, GUGLIELMO ACHILLE CAVELLINI, at the  ARTESTUDIO MORANDI of Ponte Nossa in via San Bernardino, 88, curated by Emilio and Franca Morandi in collaboration with the Associazione Linea Infinita, tributes to CAVELLINI "CAVELLINI CENTENARY" will be exposed,  received by mail since 1991 by over 200 artists from 25 countries, from 3 to 18 May. On 10 May performances PERFOMEDIA will  be held at  the ARTESTUDIO MORANDI, dedicated to centenary of CAVELLINI, entitled" GAC EVENT DAY "with performative actions. The book ARTPOOL" THE EXPERIMENTAL  ART ARCHIVE OF EAST-CENTRAL EUROPE " from 1970 to 2013 Budapest of Gyorgy Galantai and Julia Klaniczay will be presented.

The exhibition "Centenary CAVELLINI» tributes to GAC will become a travelling exhibition at "ARTE CREATIVA42”  Rivarolo Canavese (Turin) and at the" 3D GALLERY " Mestre Venice. In Italy and around the world events and celebrations for the 100th anniversary CAVELLINIANO will be held.       After a terrific experience as a collector, CAVELLINI decided to come  in the art world, bypassing through every area and by the network of MAIL ART/ARTE POSTALE spreading in all countries and for artists, art centers and museums in his great masterpiece: the brilliant invention of AUTOSTORICIZZAZIONE's philosophy in a radical subversion of the official rules, desecrating the conventional system GALLERY OWNER – CRITIC  – MERCIANT. CAVELLINI was a forerunner of the present art with his bold experimentation, his acrobatic performances, its cheeky provocation , his ingenious forerunner  creativity  into different territories over the art, becoming already before his death a symbol of free art, with festivals in his honor in America, Japan, Europe, with the creation of research centres, archives and Cavelliniani museums.

Since 1980 the ARTESTUDIO MORANDI art centre in Ponte Nossa (Bergamo) follows with interest the case of CAVELLINI artist receiving his visit in 1981 on the occasion of the presence of the artist performer Kazumichi Fujiwara from Japan;  in 1984 for the New Yorker artists Charles Stanley (alias Carlo Pittore) and Damien Gray performance; in 1985 during the NEOIST FESTIVAL, on the shore of the river he proposed the CAVELLINIANO TREE installation with his Centennial stickers on the leaves  and the performance CAVELLINI PARADE.  GAC wore the white dress that had completely filled with his written self  historicization, and with all international artists present at the festival, he walked in the parade through the streets of the village to the Town Hall where he was received by the Mayor in the Council Chamber, Gac held a conference on the future art and made a portrait of the Mayor, Giuseppe Pinetti. In May 1990 the ARTESTUDIO MORANDI showed the last solo CAVELLINI’s exhibition.

He disappeared in October 1990. The ARTESTUDIO MORANDI keeps in his archive all CAVELLINI’s books kindly sent from time to time by him, his letters, his stickers, his writings, home exhibitions and various  "ANDATA E RITORNO" operations, information about his life, his artistic activity, and his "AUTOSTORICIZZAZIONE" philosophy so this space is now also referred to as "Directions for use by  CAVELLINI” authorized by himself,  where it is possible to consult all the material available for studies, research and insights. Every year since 1990, The ARTESTUDIO MORANDI in May until 2014 celebrated

Thanks to reporting by Emilio Morandi and Franca