And because Erni Bar believes I have enough trash-brains (his term), he sent me his worn-out black shoes: 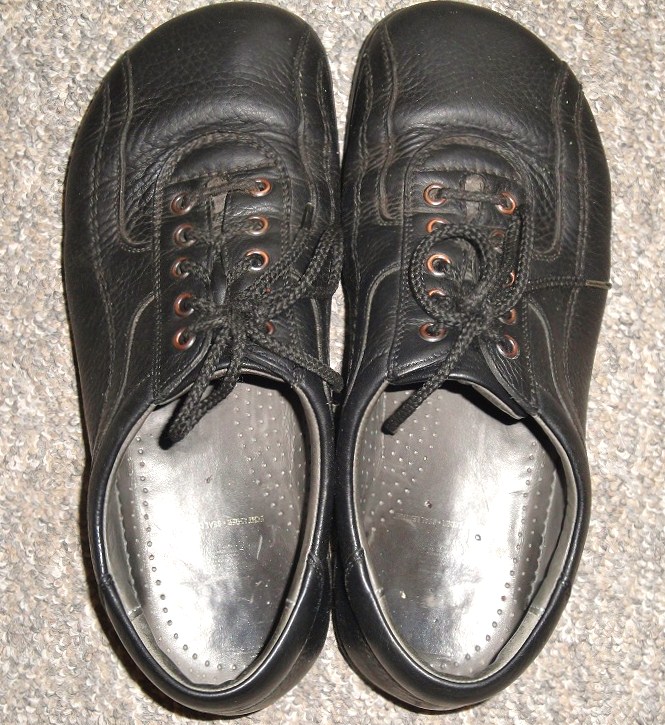 He's right, and he sent these to the right person. Not only do I have a thing for worn-out shoes but Erni's worn-out shoes fit me! That's right, I'm wearing these babies. They're slightly big and wide--just how I like 'em. If Erni thinks these are worn out, one can only imagine what he'd think of the shoes/boots usually worn around here. This is the best pair in the house! To top it off, the brand name is Bar, says so right on the soles. Here are two shots from above, with my favorite socks (tried a "model" stance in the second shot): 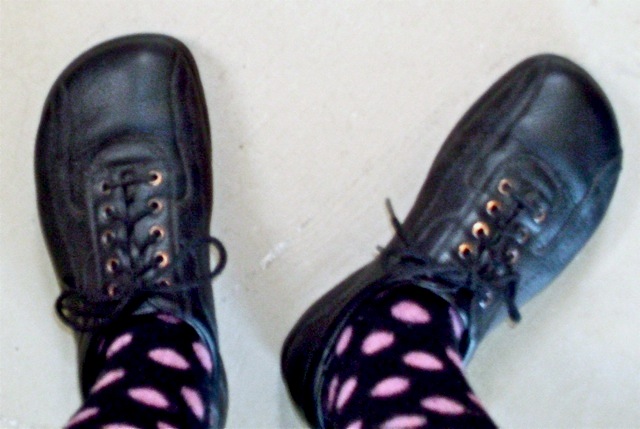 These shoes are famous, too. Hamburg's best Pedestrian Speech Act was performed in these black shoes! Black because, as Erni quotes Frank Zappa more than once on his packaging, Brown Shoes Don't Make It. Erni says the shoebox he sent these in is the original box: 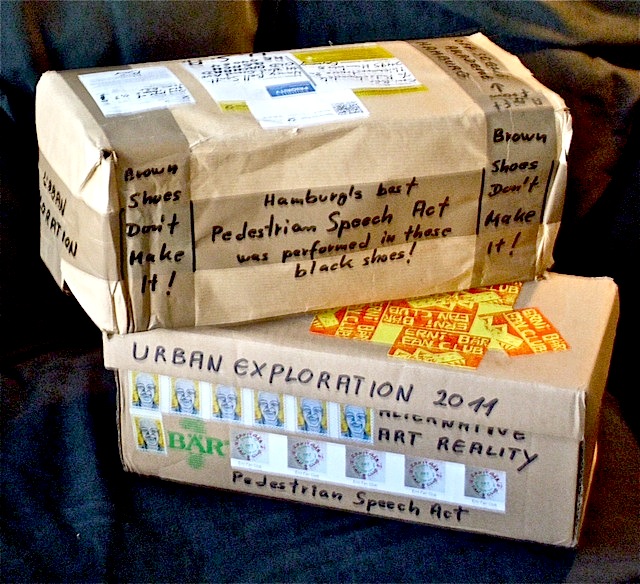 He had these high-quality leather shoes re-soled twice before giving up on them and sending them to Maine. I couldn't be happier that he did, and feel SO well-shod now. No closet archiving for this mail art. When they really do fall apart, they will be hung from the ceiling or painted or collaged. Thank you thank you thank you, Erni! from one of your many adoring Fan Club members

Don't worry about her, Erni. I know firsthand that it's a dream come true, without even knowing I had it.

It's a good thing they're black, Katerina. Otherwise you couldn't have posted them here.  Or even admit you have them.  :--}

I have a few pairs of "New Balance" that, fortunately, are black...

as "brown shoes don't make it"! 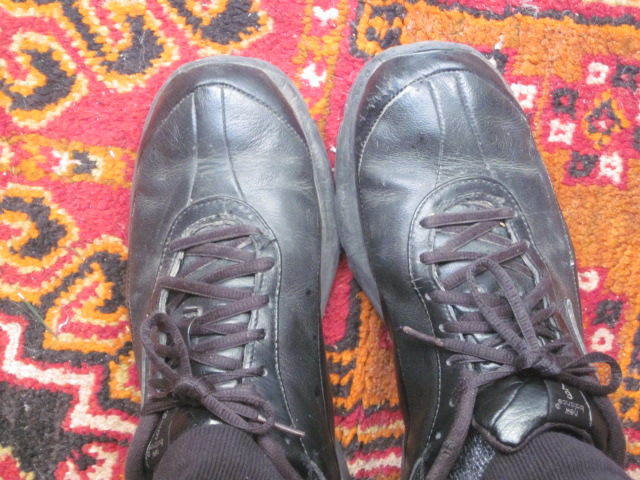 Erni, got any old shoes for these socks,too? Erni, Katerina's posting her fabulous striped socks made me put on some of my striped socks today (well, two to be exact), and you should see the picture also, since it features my Erni shoes as well: Let's not forget the vast role that coincidence has played in this performance: That the shoes were available to be sent, that the recipient was willing to accept them, without knowing the sender personally, that the reception was an Active engagement with the art, not merely a passive acknowledgment followed by dismissal, and that

The Shoes FIT!  That is probably the best part relative to the actual act of giving such a A.valuable and B.personal object.  It is really a worlds aligning moment!

I wonder, if the performance of sending and receiving mail art becomes too self-conscious, whether that negates or at least waters down the original reasons or impetus for doing it.

It's sorta making sense to me.

(And better to over than to under.)

Interesting mail-art dog history! Snooky seems to have an aura of dignity. Your poor dog, though, coming close to a lounge lizard thing. Sounds like a close call ...

Thanks for indulging my need to over-analyze everything! Because Boot Camp w/ Nancy & Erni is really an end in itself. But the human mind always seeks to find meaning.

With Erni and his chocolate, I got my dog (stage name Simba) involved. And it really came close to becoming this cheesy Fluxus dog act - a lounge lizard thing - which in some ways would have sullied performance art or was a parody. But Snooky the Amazing Mail-Art Dog is a sort of an avant dog act. And Jen's pup has made appearances too.

There's a great quote from Ruud Janssen that talks about this exactly - to think about sending and receiving mail-art as a kind of performance. Sure, we send each other cards and notes too. But you can get into these larger activities. Yeah, Nancy, the definition of performance is stretched, some classics like pouring water into a glass while you're standing on a tall later, taking apart and putting together a flute as a concert, sending out Fluxus words - but there is a logic that sometimes grows out of it. I read Fluxus developed "concept art" to describe these performances. That evolved into conceptual art. Sorta makes sense.

Marshall McLuhan - what are ya doin'?