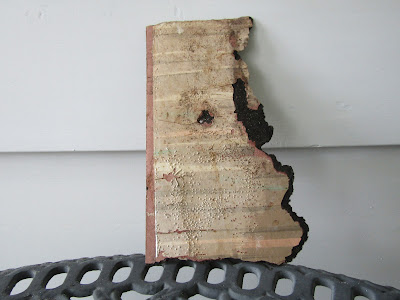 May 24, 2019 - Yesterday I documented readymade asemic poetry by Richard Canard. Today I have a piece in the same genre by asemic artist Nancy Bell Scott (NBS). I patiently awaited the right opportunity to unveil this work sent to me as mail art, and that perfect occasion has arisen. With readymade or as I prefer to call them "found asemics" context goes a long way to lessen the seeming absurdity of the "shock of the new." Here is the reverse side: 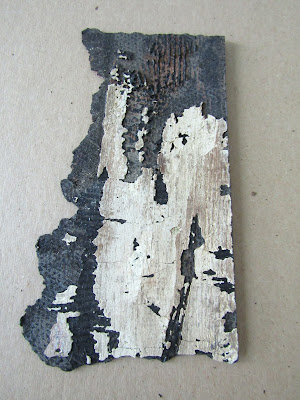 An astute observer might respond, "I think that's a piece of old torn linoleum. You're all crazy." (We might also say the Mona Lisa is a bunch of paint on an old canvas with boards.)
Since we also know Nancy Bell Scott is an asemic writer,  this is an asemic writing blog and mail art is often conceptual art, we might also notice - if we use our imaginations - the piece of linoleum has the shape of a poem on a page and has lines that suggest lines of written verse. (That's basically the definition of asemic writing.)
Is the shape of a poem and its signs and structures part of the experience of the poem? The context of "art" and an "art space" asks us to take the artist's vision seriously and apply time and thought to consider what the artist is sharing. "Entertainment" is less demanding (and consequently offers less), although this NBS piece has an entertaining quality as well that can carry it entirely.
The work has textures and tones (some of which can be experienced on a tactile level) the way a poem has tones and changing emotional nuances. The piece also offers some insight into "the materiality of language," a subject which consumes visual poets.
You can reject this asemic poem as a lot of b---it. You might even become a little angry and annoyed that someone is suggesting this is a poem and wasting your time. Maybe it's a hoax. In a way - coming from the avant garde tradition as it does - this "poem" by Nancy Bell Scott wants you to reject it, to dislike it, to think about why this is not a poem and what constitutes a "bad poem." So for me, this piece works well as a "found asemic poem." Nancy included a kind message in her distinctive calligraphy: 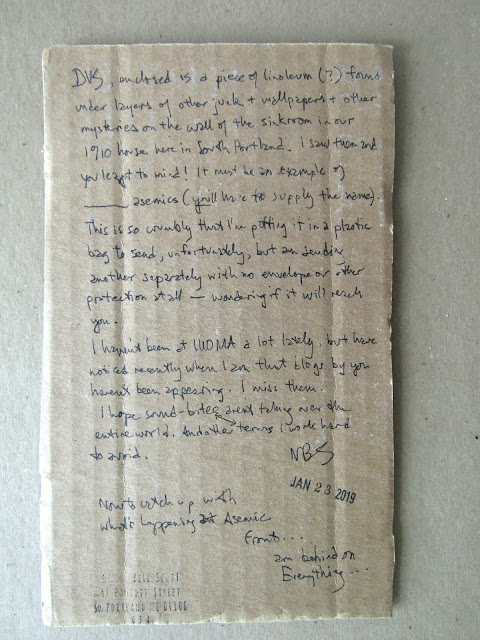 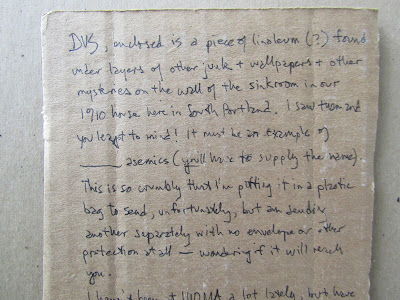 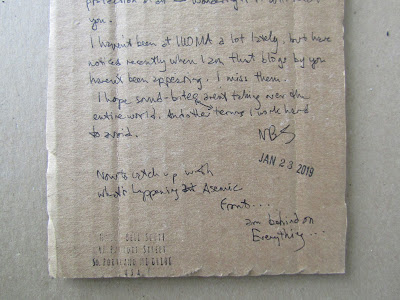 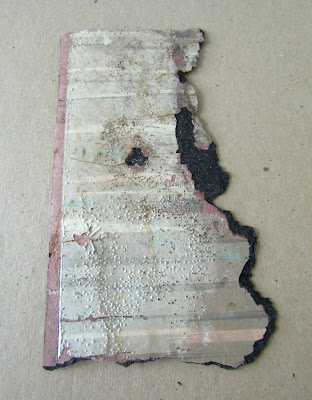 Nancy Bell Scott entered the Eternal Network nearly a decade ago. She was influenced by Diane Keys, whom I believe gave NBS her appreciation for found materials. NBS participated in Cheryl Penn's collaborative book projects, and I believe that is where - like many of us - she became interested in asemic writing.
Since then, NBS has become an applauded asemic writer-artist, well-known in the asemic and visual poetry communities. Her contributions to Asemic Front always generate interest and excitement. I am very grateful for her participation.
Currently, Nancy Bell Scott's claim to a place in vispo history comes from her "eco-asemics," which is another kind of "found asemics" involving locating language-suggestive materials in nature and as devoid of human manipulation as is possible. A book forthcoming from the University of Minnesota Press discusses her eco-asemics (more info on this in the future). But she has also produced an extraordinary body of work using calligraphy, painting and collage. No doubt this aspect of her production will receive more and more attention as well. 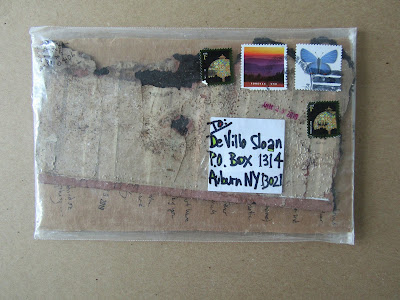 Thank you for this very nice and thought-provoking blog, DVS; and for your kind comment, Jayne--I'm glad to see your postings in the asemic group. Yes, DK, and Cheryl Penn + all you asemic types at IUOMA, have been hugely inspirational to me. Found objects and bits of asemic writing were used at times in earlier work (1990s), but it wasn't until IUOMA turned up in some online search that those worlds really opened up to me. Plus it's always exciting, and freeing, to find one isn't alone with one's weirdness. I'm forever grateful. Thanks, Jayne. Your comments are appreciated.

NBS will likely be Queen of Eco-Asemics when that book comes out. To be fair, these readymade and found asemics are not the reason so many people admire her work. Here are some more representative pieces by Nancy Bell Scott that have appeared on Asemic Front: 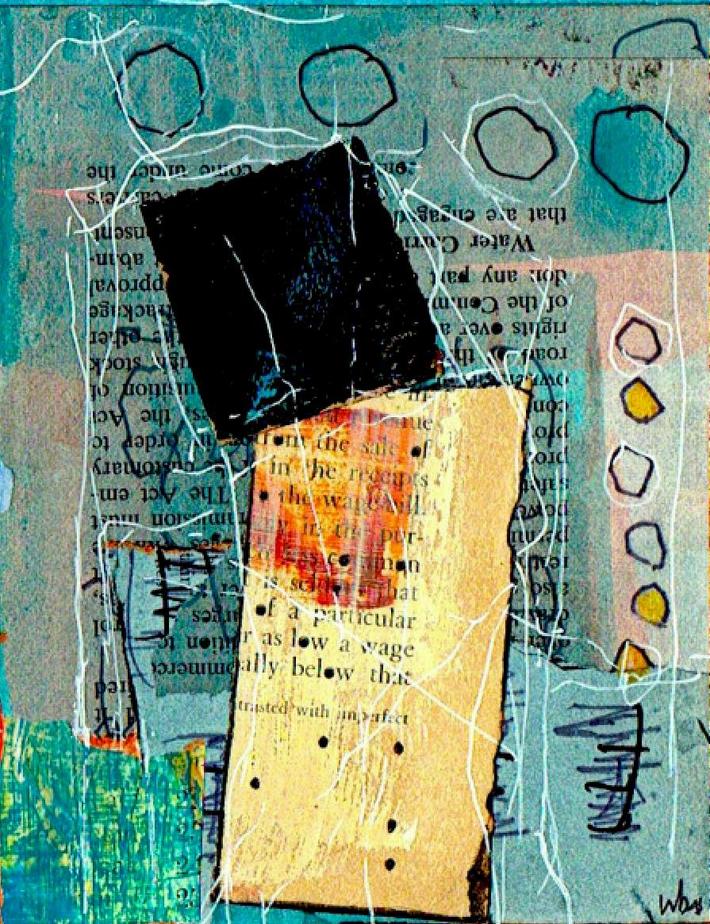 Not to sound like a broken record, but - another informative blog post from DVS. I am a great admirer of NBS, and I appreciate the background information on her asemic writing history. That linoleum piece is quite interesting. You know, DVS - I recently took photos of some of the tile work on our kitchen backsplash. It calls to mind asemic writing.   I’d like to share those photos. Thank you.