May 17, 2015 - Ruud Janssen has created many charts mapping trends, events, strategies, theories and other subjects related to mail art and Fluxus. These charts are often works of visual art as well as texts, making them different from earlier Fluxus prototypes. Ruud Janssen’s charts can be viewed as visual poetry as well.

I was thrilled to discover through online sources that Ruud Janssen had created a seven “fase” work exploring some current trends in mail art of great interest to me. Then I was even more thrilled to receive this poster size copy of the work. The entire “new art directions” is shown above in the form of a scan that was originally posted online by Ruud Janssen. Given my scanner limitations, I post my own scanning of the work below in two halves. This does allow for a close look at the details:

Here is the note on the reverse side:

“new art directions” seems to be a part of Ruud Janssen’s ongoing meditations upon the nature of mail art in the digital and snail mail realms. This is a subject of great concern to many mail artists; and dialogues have taken place on several digital platforms, including at IUOMA-Ning. The conversation continues with many differing opinions, ranging from pronouncements of the death of mail art to promises of a new Golden Age made possible by the digital.

Comparisons of mail art being produced today with the products of previous decades are inevitable and necessary in this discussion. “new art directions,” in addition to its digital theme, addresses a particular aspect of contemporary mail art. Some observers have noted a folk art trend in contemporary mail art. I am in agreement the folk art tendency exists and have even given it a name: Mail Art NouveauX.

Yet I believe the avant-influenced, conceptual art-based mail art remains dominant in the network. This is a mail art rooted in Ray Johnson and the New York Correspondance School and Fluxus, although it has evolved via influences such as Neoism (not to mention dozens of important individual artists). Fluxus – now the domain of museums, art historians and collectors in the mainstream – has survived and is thriving in a different form in the Eternal Network. (The current status of Fluxus is highly controversial.) I agree with Ruud Janssen (I believe he is suggesting) that Trashpo, DKult and asemics are current mail art “movements” that are “Fluxed” – inherently derived from Fluxus, although there are other pronounced influences as well.

Trashpo is by definition a kind of visual poetry using found materials based on pieces Jim Leftwich (Virginia, USA) made in 2005. Probably due to the popularity of working with found material, many mail artists have experimented with Trashpo. DKult is a community of mail artists who are particularly passionate about Trashpo. Based around Diane Keys (Illinois, USA) with chapters across the globe, DKult seems to have emerged by accident but does have strong similarities to other imaginary religions that have emerged in the network, usually as parody, such as the Church of the Subgenius and the cultish aspects of Neoism. Ray Johnson’s fan clubs are a prototype too. The anti-art stance and aesthetic are clearly derived from Fluxus.

Fluxus did not invent visual poetry nor does one need to be in some way connected to or cognizant of Fluxus to participate. But Fluxus has been a tremendous supporter of visual poetry (especially concrete poetry) for decades. Figures such as Emmett Williams and Dick Higgins made tremendous contributions. The mail art network has been a primary conduit for the circulation of concrete and visual poetry, as well as related forms, and has – indeed – kept these forms alive when they were languishing in the mainstream. The mail art network still has a primary place in the global visual poetry community, and I completely agree the situation is the same for asemic writing: the current “new kid on the block.”

In this way, I understand Ruud Janssen’s “new art directions.”

The material above was also included in the mailing. As if all this were not enough, this material came in a vintage, hand-painted envelope:

Deepest thanks to Ruud Janssen!

Thanks Rebecca (even DK is calling you Le Becca) and, of course, Ruud. I've been following the "mindmaps" for years. To have one covering asemics, Trashpo and DKult in the same "mindbreath" (Allen Ginsberg word) as Fluxus is an occasion indeed.

What does Ruud receive for the effort? A nomination for the TrashPo Litzer Prize. He probably never considered that would be a logical consequence of all this, and his name would be "emblazoned forever upon the Landfill of Fame."

Well, it was great fun and some memorable art was made, I think. 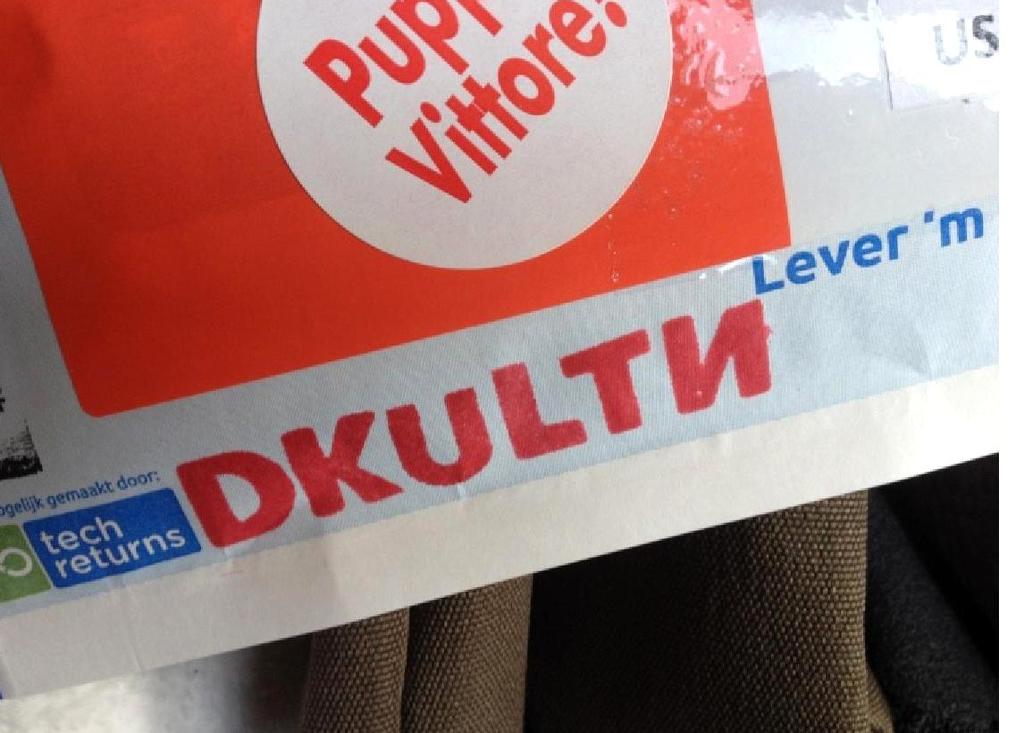 I think I will send Ruud a Dkult bus!

Great writing, as ever, DVS.

The mindmaps are always a timeframe. When I would start again a new chart would come out. That is why I enjoy making them. It makes it easy to look back on what you thought of, not that you thoughts itself stay the same.

Thanks for a most interesting blog De Villo Sloan. Always good to hear your views on the subject too. Dkult needs more exploring for sure. I am on it....