How do you spell muumuu? 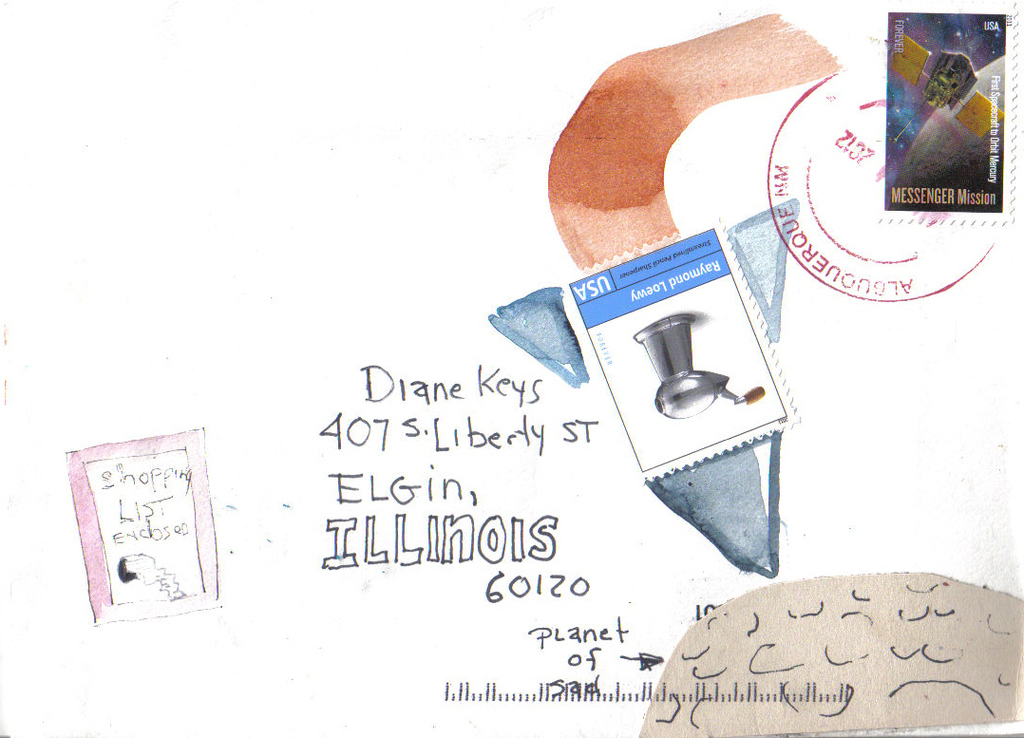 Mail from the Planet of sad,… I have to admit I have been too terrified to do anything more with this art. I have added to the coffee sleeve as instructed by Dkult's resident bad ass gangster Fat Steve "The Sleve" (no one knows the true origin of his name and no one dares ask)--how could I not with a bomb pointing at me? The problem I now have, is that Nadine did not tell me what to do with this Charbucks… 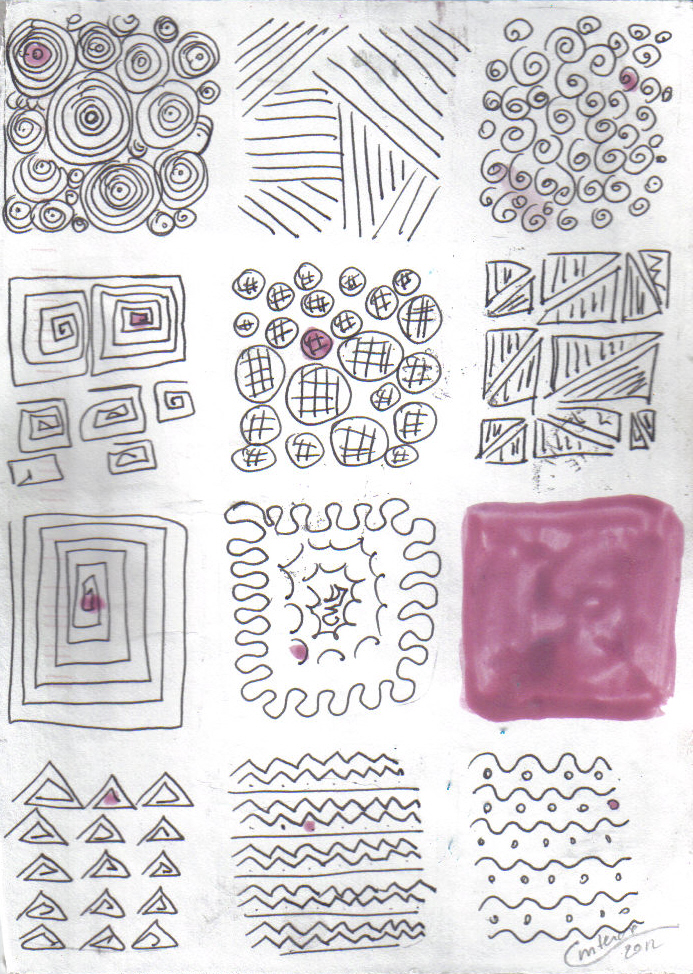 I thought this piece was from Susan McAllister originally. I find this piece  so well conceived and fascinating in its' precision and detail. I could honestly look at it for hours and wish it was a poster size. It is calmling as everything fits neatly contained in its own space, unlike life that gets way out of line…

TRAshPO Mail Art Call Has Room in the TrashBin For You!! Please send your trashpo works for the first ever Trashpo Mail Art Call!!! I have received some great entries so far, but there is plenty more time before the end of the world on 12/21/2012. The show isn't until January, so call me an optimist.  Send your works to:

My week in mail art blogjam 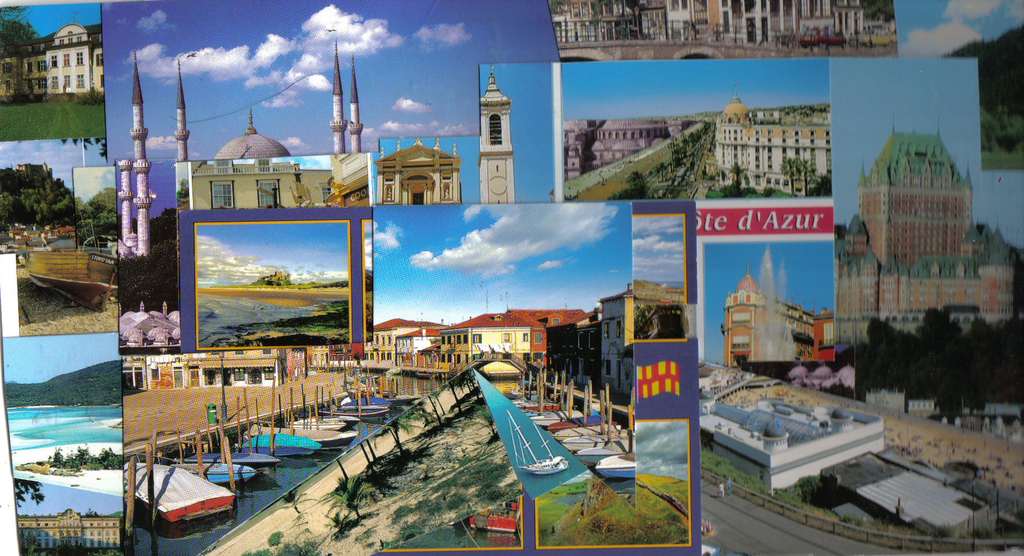 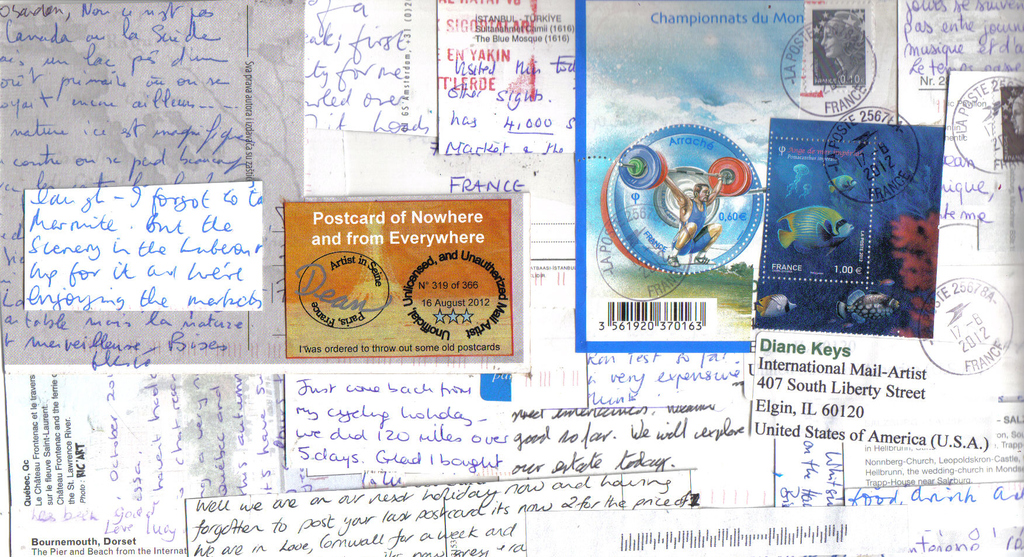 Dean tells me that his wife is his greatest inspiration-if she tells him to throw something in the bin, it gives him the idea to make art out of it. I like thinking of his wife as the human trashpo detection system-what is garbage to her, is art to us. I don't… Cheryl sent me cross section of a 'massacred' larger work along with a photo of the entire piece. It is beautiful and smells deliciously of paint. Below is a piece from Svenja Wahl and she has written "Don't Ask" on the back.I can only speculate as to what she means, but it definately makes me WANT to ask. She has adhered this delicate paper to the back of some plastic-such a…

Art About Art Within Art from Carina Granlund in Finland Only Carina could conceive of such a thing.  funny yet poignant at the same time! 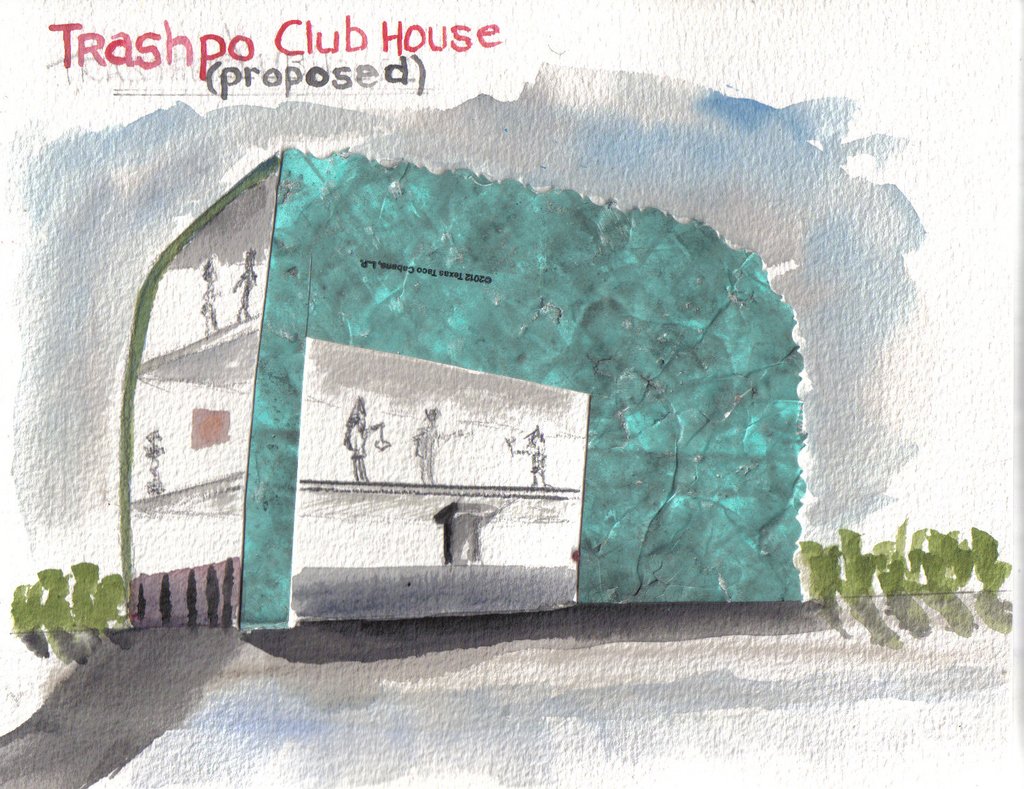 Plans appear to be copywritten by Texas Taco Cabana. It sure does look cozy and already lived in--by grungy mechanics and fast food workers. David has uncovered a dirty little DKult secret-that it evolved from a Taco Cabana Turquoise cup, and NOT the beautiful… The title for this piece from Kerri Pullo is "Figurative Languages What's Eating you?"The asemic ips effectiveness cartoon says it all as this trashp-asemic collaboration between her son and her, is very effective. I love every little well thought out detail. I feel Kerri pulls from deep in her unconscious when creating and the depth… Carina is really dialed in. Love the humor in this and her signature background and stitching -her art always looks effortless! M. Nidham sent this and I'm not sure if the first one was returned or what, but it was a double bonus for me as I received twice as much art and beautiful stamps! Divine timing? I think, yes. Just when I was wondering what kind of exercise regime to begin to get demonic abs, Nadine sends me this ad for "Convict Conditioning"  the web site is www.dragondoor.com/B59    Truly an answer to many prayers. Thank you for being the messenger Nadine!!!  p.s. people always choose your rock

Jim Sant amour's style is unmistakable in this trashpo made from bits and pieces of his scraps. I love her purposeful and sparing use of trash bits and I've heard of that fabric that reveals images when you sweat-like a workout incentive I think. Love this Rockette tribute thanks Dani! 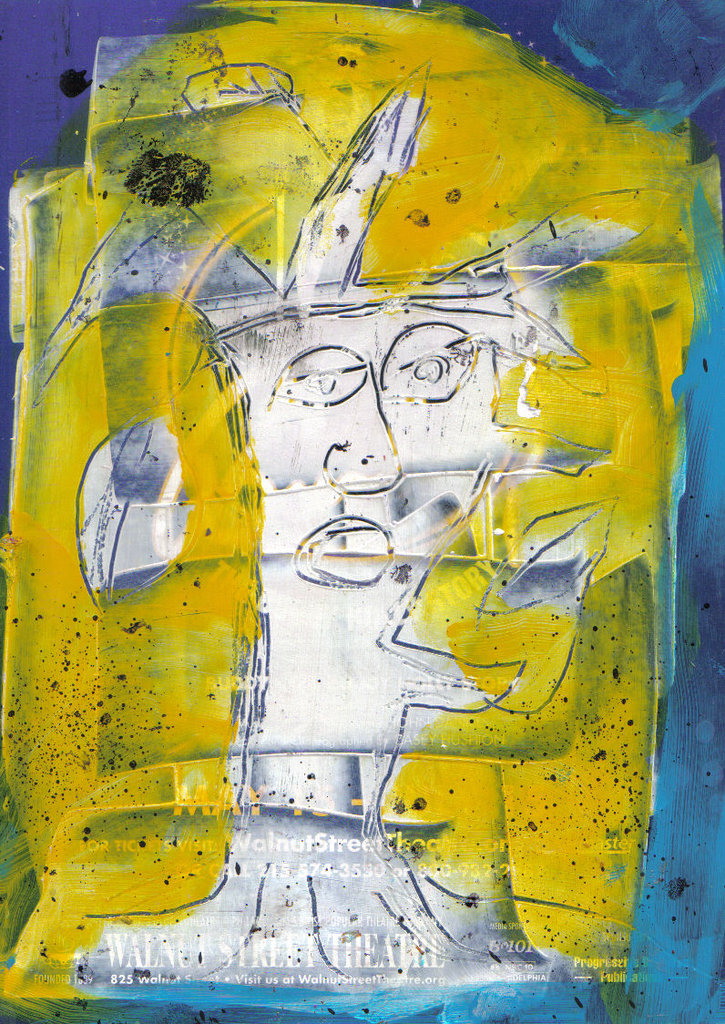 Claudia writes, "What? Me Worry?" as the caption for the awesome Picasso-esque tree. I am totally fascinated by Claudia's painting technique. I'm really not sure how she achieves this look. She makes it look effortless, and that it is created on trashpo puts it over the top. Thank you for another masterpiece… I like the asemic writing on the envelope and this poor overworked postman--doesn't he know we are waiting for our mail? Niklas' drawing skills are out of this world. This recent series is incredible. Thank you! This is so balanced and aesthetically beautiful given that it is such grungy/raw trash. Torma has an amazing eye. More trashpo is posted at my blog at dianekeys.blogspot.com

Please send submissions for my trashpo call to

Exhibition will take place in Jan 2012…

Received this piece from KingPins in his now infamous plastic boxes. It was accordian folded and devoted to the famouse Elgin Watch. I live in the Elgin Historic Watch District so this was perfect. And he has included the riverboat casino that is just up the street-he has done his homework. He promises this piece is 1 of ? which hopefully means many more to come. Thank…