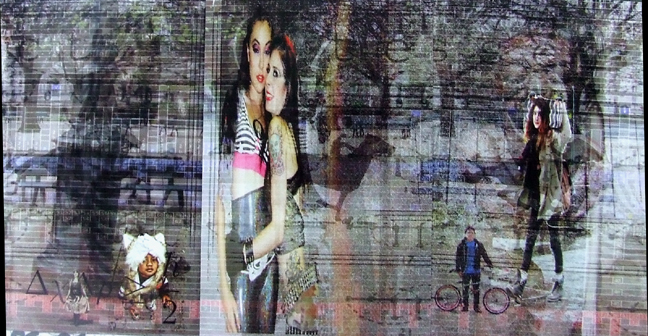 Received this excellently drawn zombie kitty yesterday. You can't see frmo the picture, but certain parts of the cat are 3D  (Paw, eye, and tail). I like the cat's rat tail he looks like he's been through hell-maybe Road Kill raised from the dead. He SHOULD take his revenge. Thank you… Continue 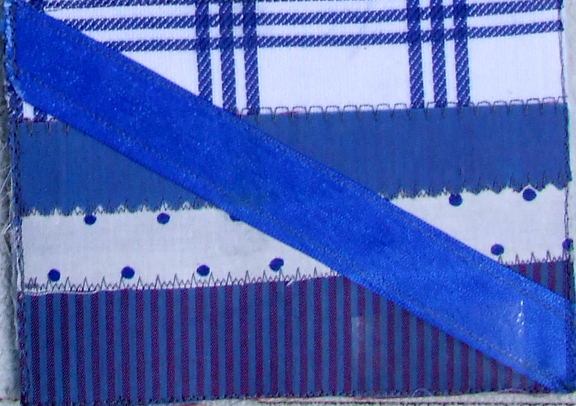 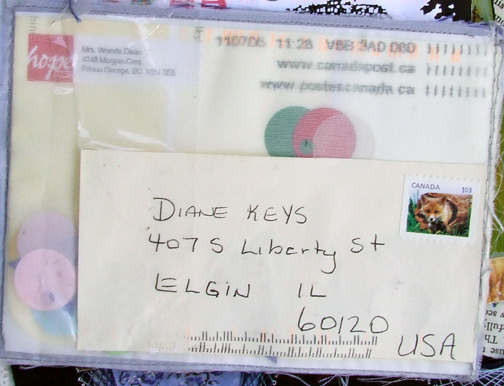 Received this great card from Wanda that made is in spite of the Canadian Postal Strike. It is beautifully  pieced together and has a great surprise in the back where she stitched round confetti pieces inside. Thank you Wanda I love this card! Lisa (Skybridge… Continue

This could only be from Helen Aymes 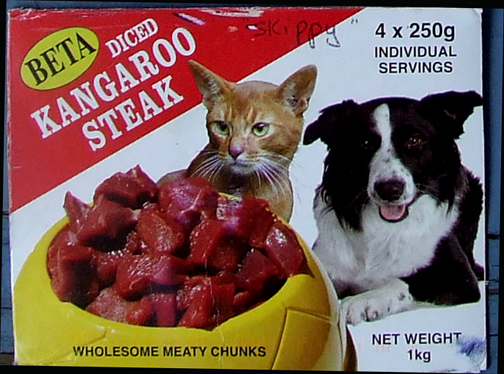 I laughed so hard when I received this. Helen and I were talking about the problem of overpopulation of kangaroos in Australia. She said they use kangaroo meat in pet food. I also asked if people eat it, so I think this is the answer to that "Not fit for human… Continue 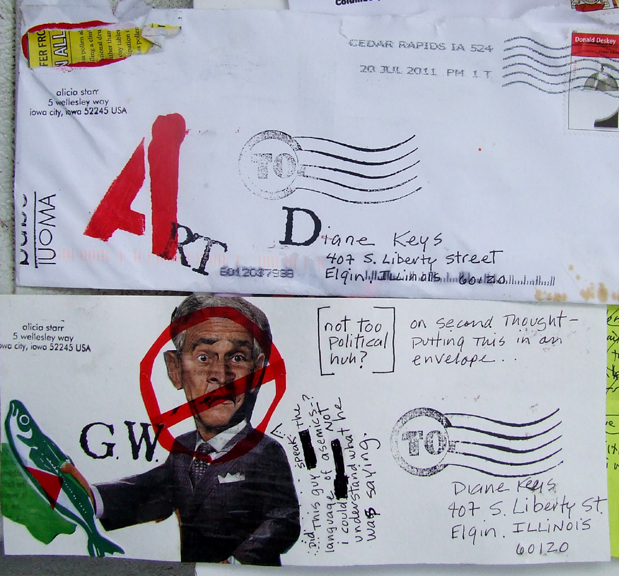 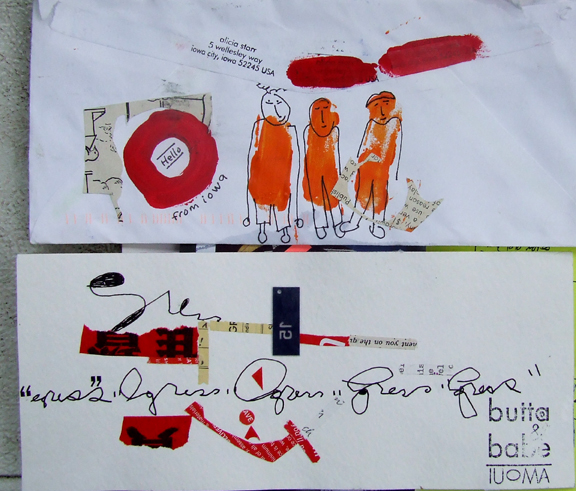 This asemic looks like a transcription of Bush Speak although I think it shows it much more eloquently than he deserves. Love the the three little men from Iowa. Thank you so much for this… Continue Love the way the werewolf put this together very abstract thank you Erni!!! It's raining here so all my mail was soggy today, but any day I get mail art is a great day!! 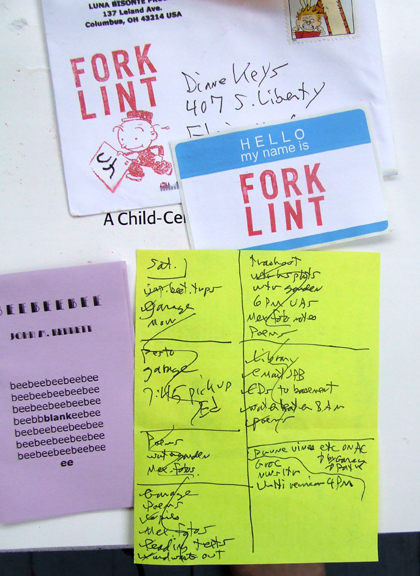 John Bennett seems to have gotten crazy busy. How does he have time to do anything with all this list… Continue 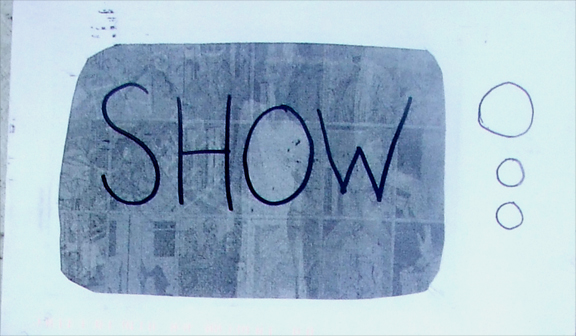 I just know this is supposed to be a children's book and I love getting installments of this magical story. thank you!! This book is so beautiful, I have no idea how Vaida makes these thread spirals. The book has no distinct up or down and there are so many different though lines to discover throughout. The theme seems to play on the window/portals she has created and deals with a… Continue I have received the most amazing and thoughtful package from resident garbage artist and glue magician, Erni Bar. It arrived on my porch  marked as "domestic garbage". The contents do include some wonderful German garbage but so much else. FoodPo!!!! The back has a wonderful note to the postman.… 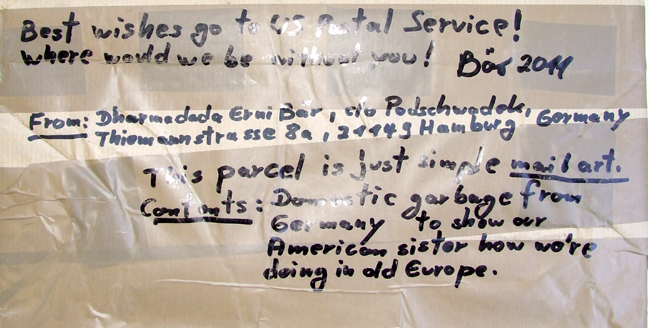 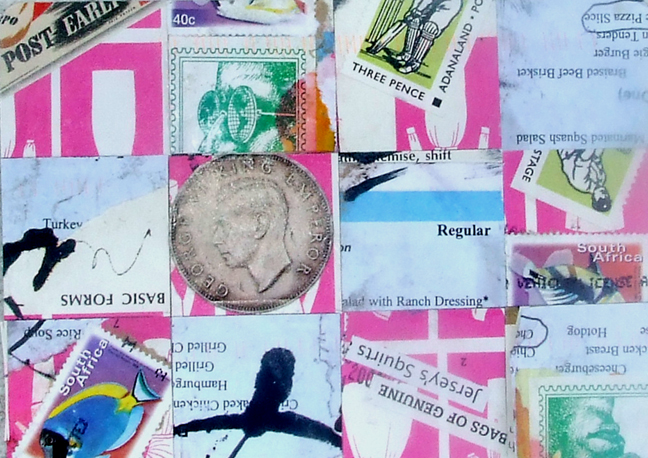 Got this deconstructed then reconstructed card today. It is made of a card I sent to him , which had elements of art received from Cheryl Penn what a fun idea!!!! Very colorful piece from Erni looking like a cross between Victorian wallpaper and the botanic gardens. must attend this yoga retreat with yogini erni 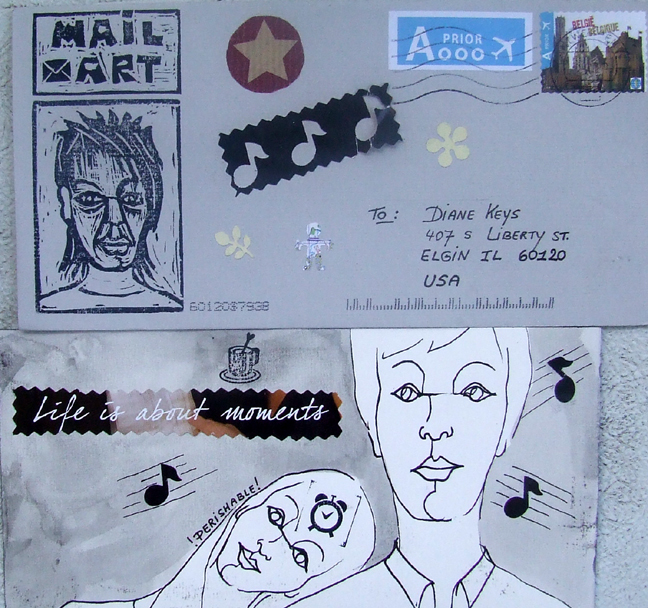 I really love the message of this card and all the carefully chosen details, and the drawing is excellent. Thank you Catherine. This arrived from Belgium in five days-not… Continue

Mail Art in Need of Title from Mim 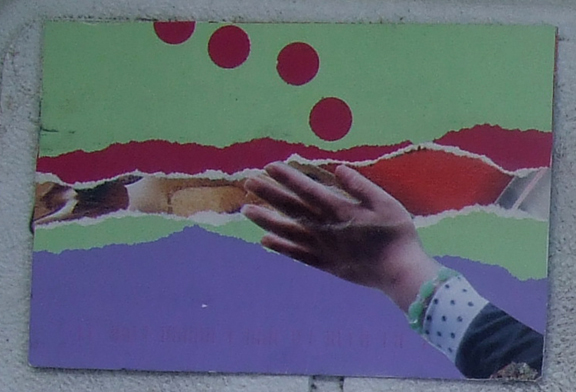 Mim wrote that on the back of this card that it needed a title, but I can't think of one either. I really love the use of torn paper and sense of movement thank you for this Mim! This arrived today with only one slight hole in it.  She thoughtfully sent this to me to 'tide me over ' until I become rich auctioning off John…

OWN a PIECE of Mail Art History!!

Please view my listing. As much as I do not wish to part with it, I need to do what I must do to feed my family.