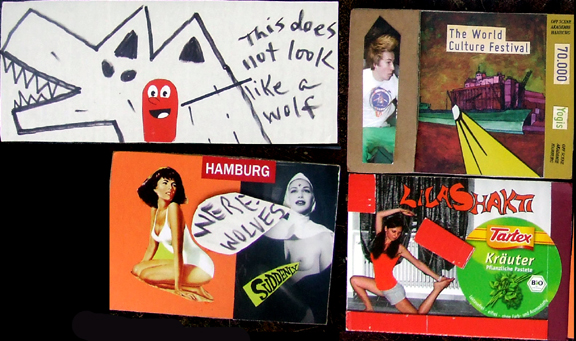 I have been so lucky over the past week to receive all these haptic pieces from the most enlightened Werewolf I know.  Ernie always uses such intriguing images for his trashpo and I laughed so hard when he sent a piece of the box I sent him back to me, along with a piece of pink duct tape I used on the same box I love the concept of morphing mail art taking on a life of its' own.… Continue 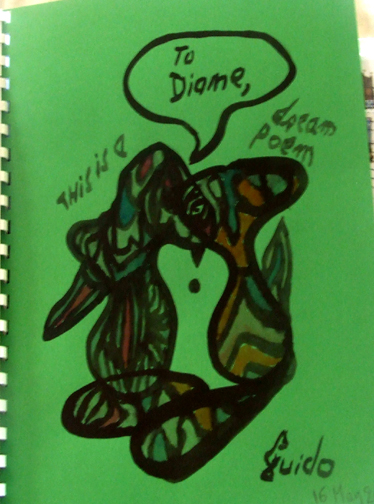 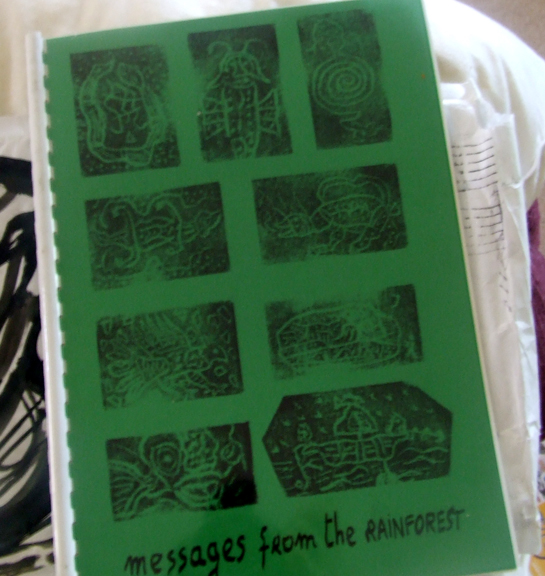 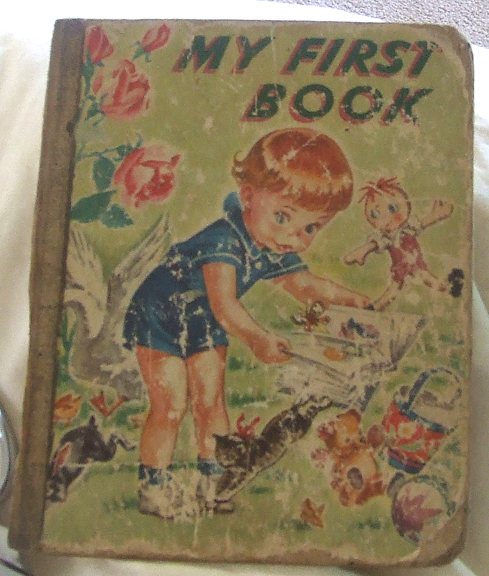 This is such a great antique book hard to believe this was a found object. Thank you Jen!!

Got this haptic card from Erni. It doesn't show in the picture, but it is silver. I think Lucky Lucy is the actual Rocket, but I'm not sure. Thank you Ernie! 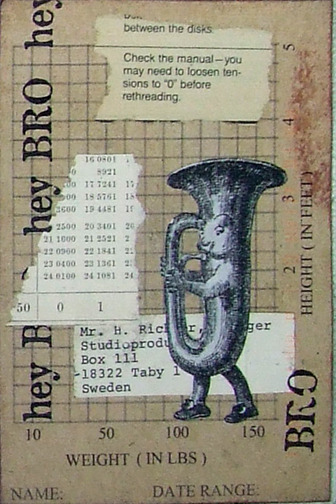 I love this collage with the muted colors and so many different layers of text. She sent me "happy hints for a safe and enjoyable summer" such as what to do in case you are in a stampede of bulls and what to do if you come across a bee hive. Thank you KDJ! 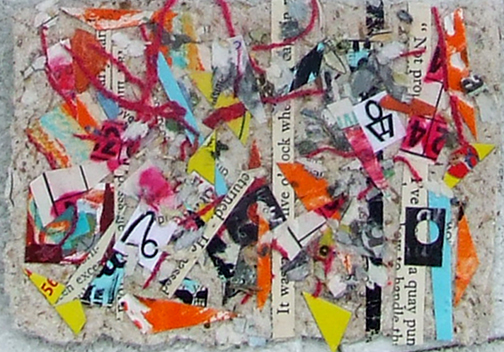 The pic doesn't do it justice, but amazingly this postcard made of handmade paper, arrived completely in tact. As she said, if it had gotten banged up it would only have enhanced it as it is trashpo. There are asemics in here and a little bit of everything. Everything on top looks like what you would use to make handmade paper. Thank you… The back of this piece has a transparent overlay. I love how the words are fading and the asemics are peaking though underneath. Cheryl has such a… Continue

I've been receiving a lot of fake stuff lately-fake lists and fake collages alike. Got a wonderful Booklet from John Bennett but am only posting the stuff he put inside=-another fake shopping list  very practical  , a tea bag, a nude, and a donation to the postage… Continue 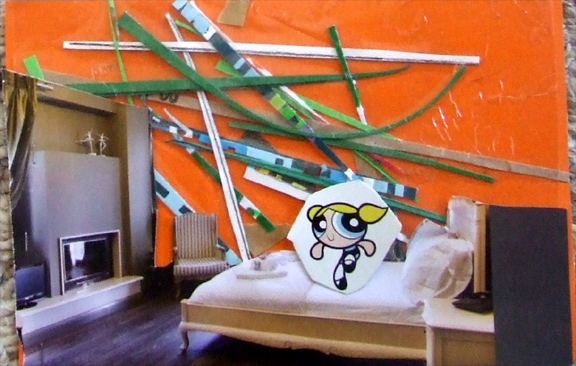 Bubbles the powerpuff girl, is very happy with her bedroom I thought it was cool that in transit this art acquired a tear that appears like a tear. Thanks for this great MA 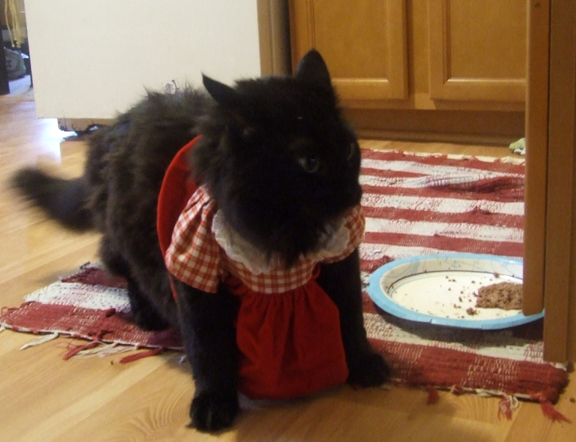 Nothing to do with received mail art. My male cat making a statement on gender roles in the cat world

Greatest Ever Foodpo MA from Angie Yes, today this very squishy FoodPo came from Angie. I can't even believe they let her mail this, but she tells the story of searching for trash for trashpo and continually seeing this pristine piece of American Cheese IN the wrapper no less on the sidewalk/street. It called to her many times as she walked past it. She finally listened to her inner voice and trashpo instincts… Continue

Evidence of a trashpo convert 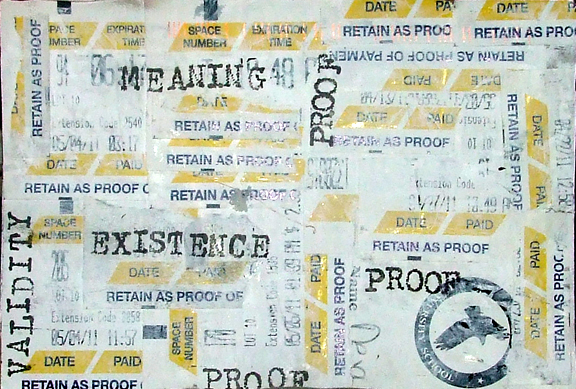 I told Angie she was far too humble when she called this her 'attempt' at trashpo. I think it is very great and philosophical really made me think. I am definately keeping this as Proof of my existence, which I often question.  She confessed to digging through the trash which proves to me that she is now hooked. Trashpo not only lives, it is contagious!! What a glorious day this… Continue This definately looks like an article from the Haptic Newspaper. Print says "Off Scene Academie" which seems appropriate.  I imagine the headline to be "Will the plasticization of America be our legacy?" Thanks Erni-not sure what Tartex is, but it sounds interesting 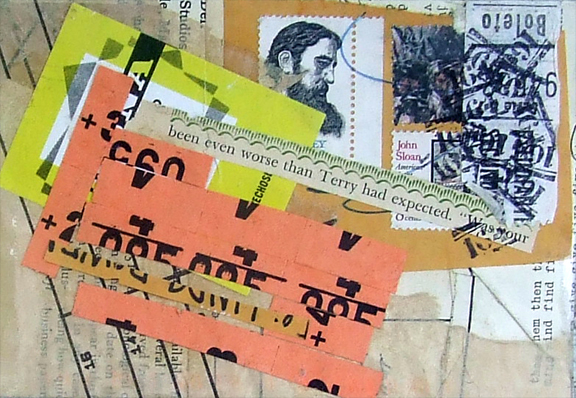 I love this new style from Sue. The layering is excellent and complex. There is a shear pattern overlay along with all the text,stamping,  and "Sloan" stamp. Thank you Sue!

Another Great Face from Georgia 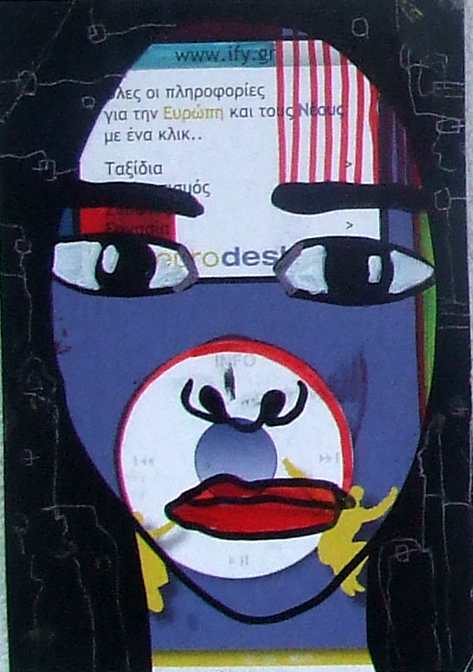 Thank you Georgia! I'd love to know what is is you are using to get the glossy finish on these postcards. it doesn't look like paint or marker, but something in between. Love this card-cool project

Homage to the great Joseph Beuys from Emilio Morandi I just love Emilio's style you can spot it instantly Eduardo said he was on the prowl for some new texture. I love his depiction of the WWW very thought provoking thank you !! 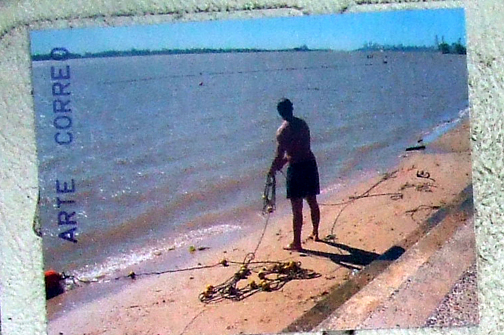 Resident Sandpo saint spreading the gospel of sand. The envelop came with all sort of wonderful things-Angie has posted many of the items. A beautiful white out sandpo piece was included but didn't photograph well. Thank you so much Marcella! 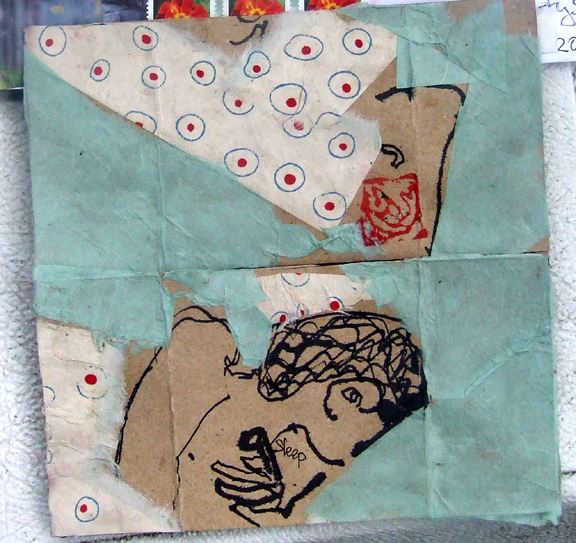 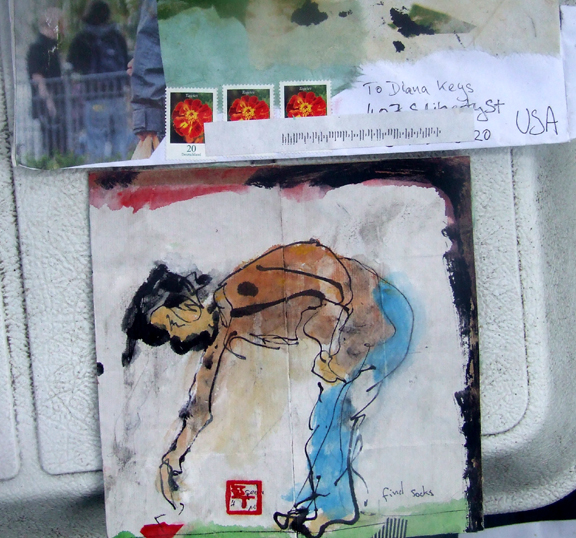