Thank you to everyone who sent in art for this project. I'm sorry if I forgot to include names of contributors. I did my best. 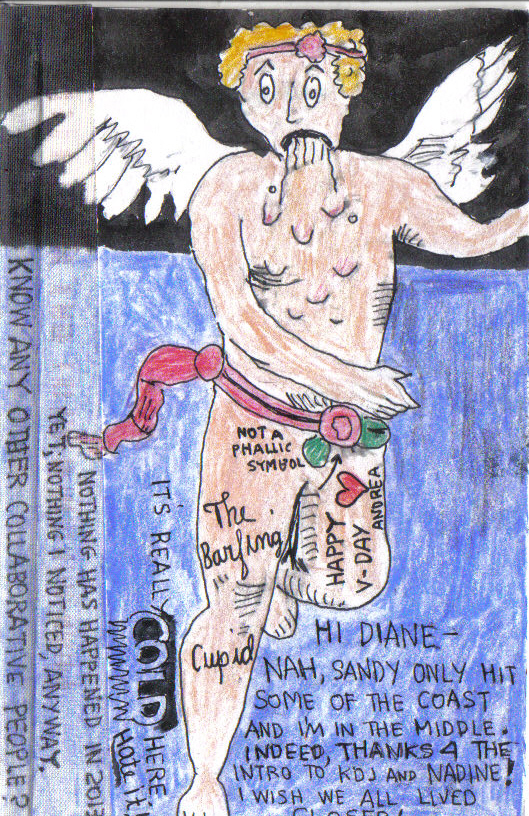 Passport to heaven from Blessed Father 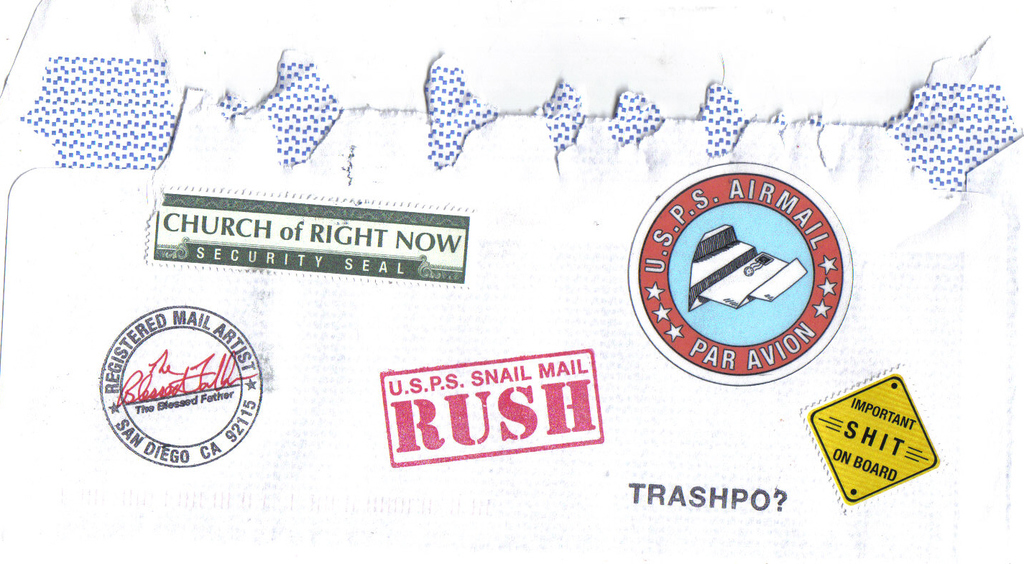 After years of doing good works to try to earn my way into Heaven, blessed Father has given me an easier option. I've got a lot to do before the launch in March. What clothes should I pack? What's the weather like in the celestial kingdom. I never thought of… 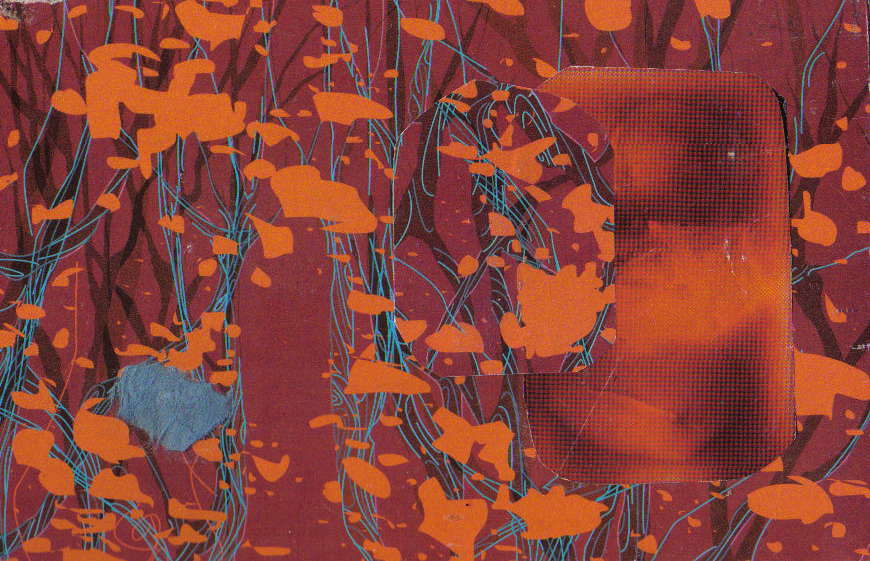 Lisa's piece came in a "We Care" postal plastic bag. Interesting that I received two pieces about smoking-Lisa's nod to Ray Johnson and Nadine's Mitt and beauty rep. I love the punker with gauges in the background. David Stafford is a master story teller and this installment is about poor Mr. Dinwoodie. I thought both of these pieces were similar, given they are so layered with patterns and shapes. And Angie's piece looks like the man who struck the deal in his favor grinning maniacally  thank you both!

Circumstances have led us to extreme measures. Dkult is offering a 29% stake in Eduardo Cordosa's Soul and 10% equity.. Open to licensing option as well. You will receive a duplicate copy of a signed (in blood) ditto xerox of the rights to his very essence. Terms are negotiable.… 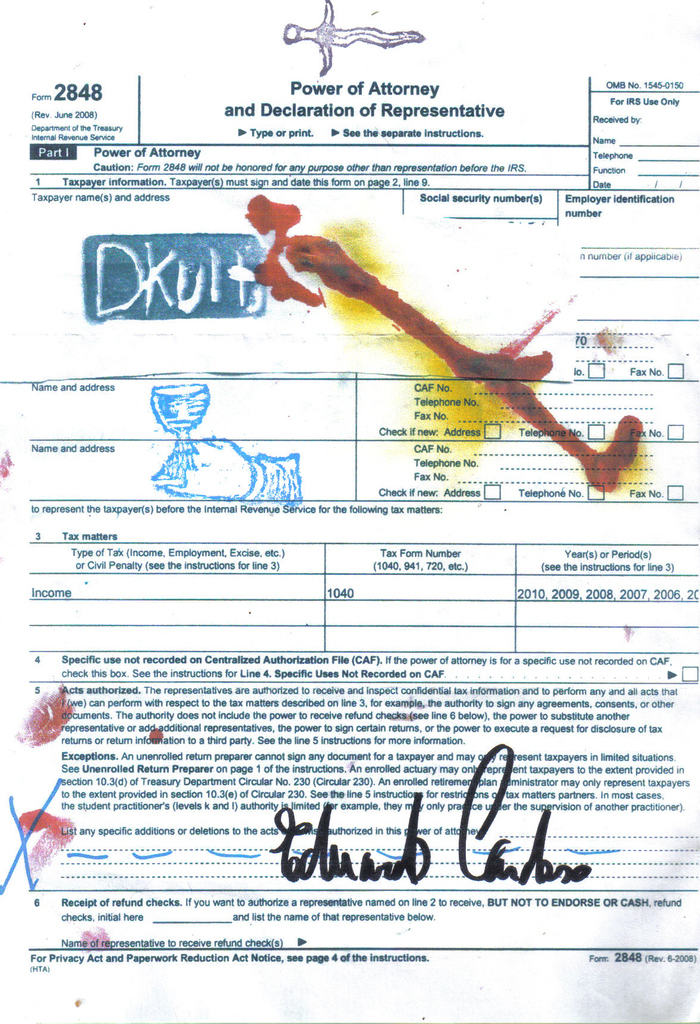 We Get Women by Alicia Starr I LOVE getting mail from Alicia and this is a whole new direction in trashpo. She has envisioned a piece of artwork around the owner of the found trash. Really beautiful thank you Alicia!!!!  I sooo admire your… I paid $1.50 postage due for this lovely sock--what a score! From Superhero/Moan Lisa.

exquisite corpse in need of legs and feet 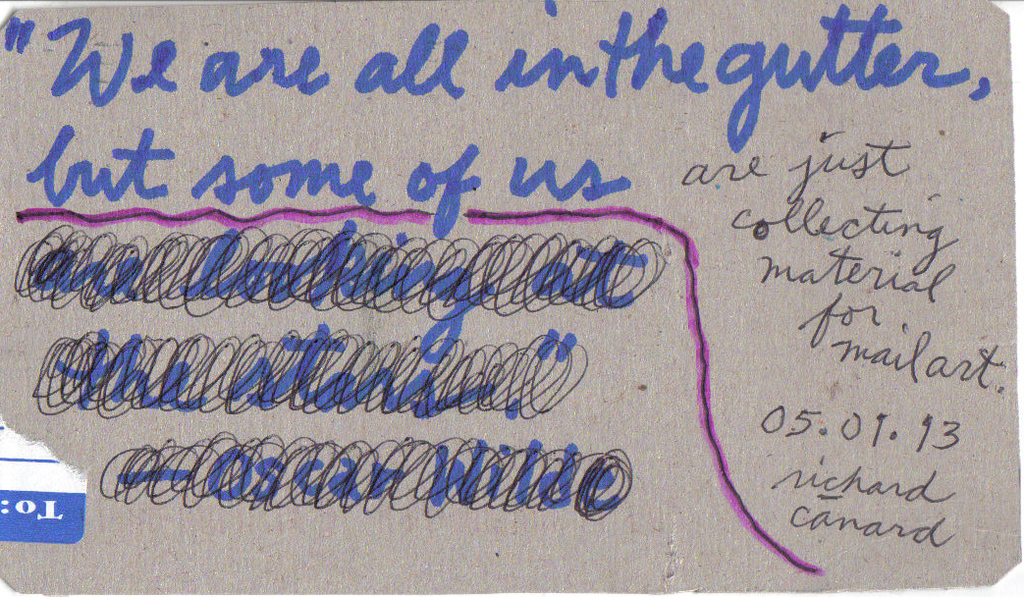 Richard is the master of reframing. I feel oddly uplifted and fatalistic at the same time. 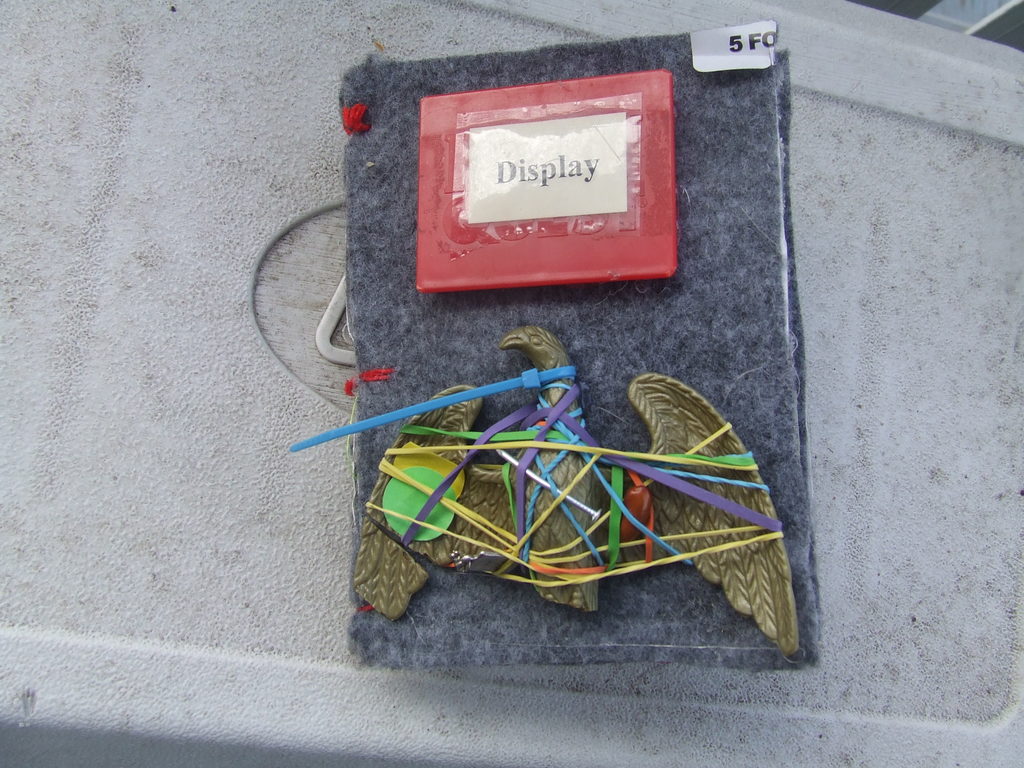 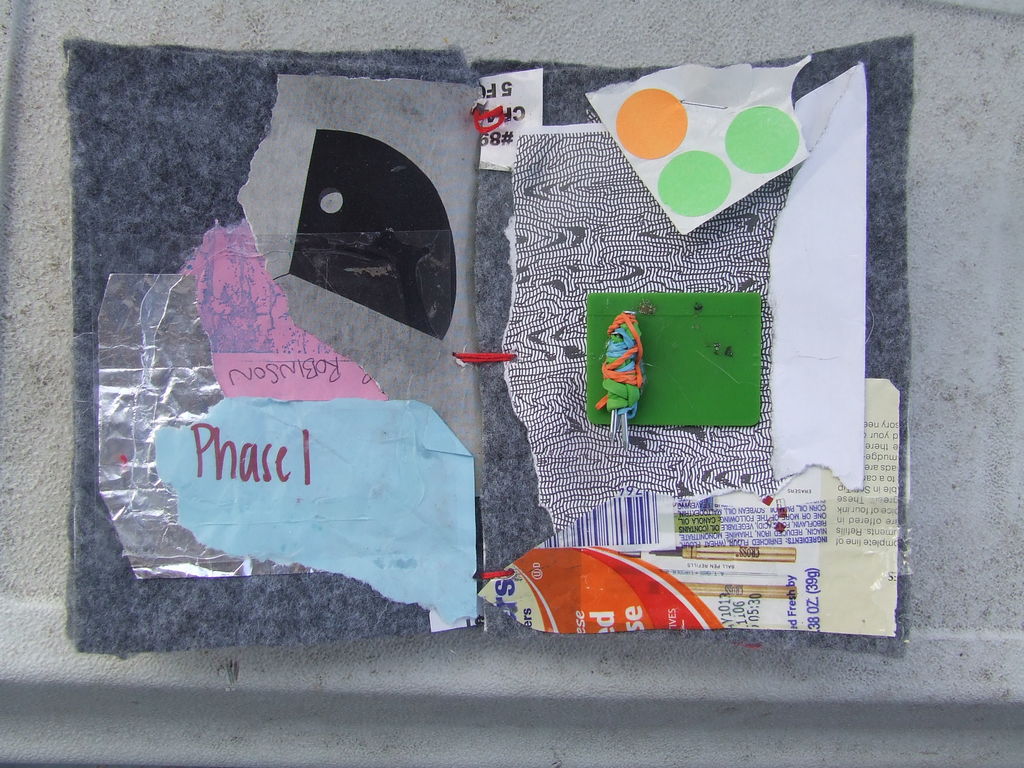 David Stafford is Runner Up in Prestigious Contest!!!!! 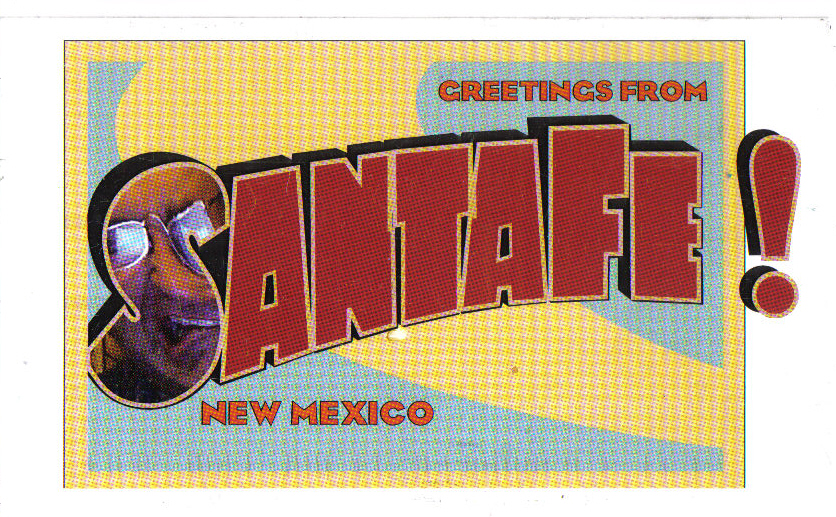 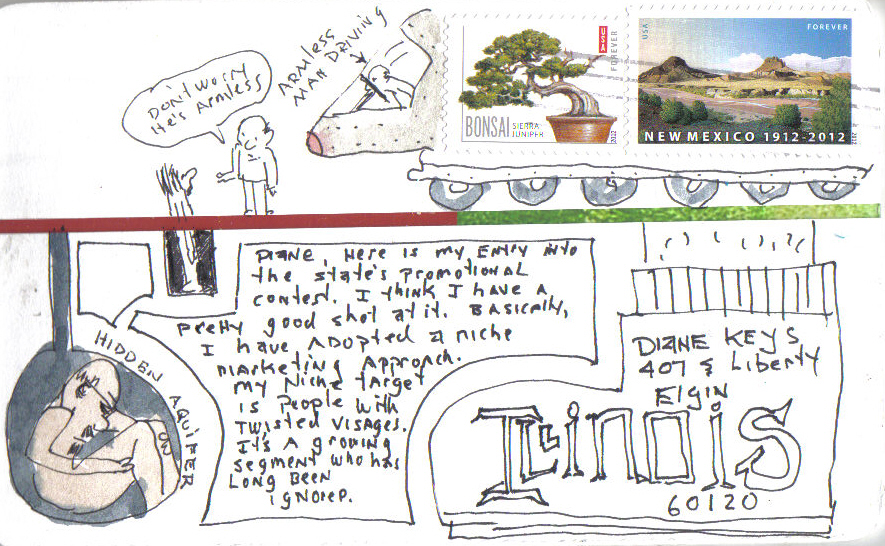 I have called the Santa Fe Dept of tourism and they deny there has ever been any such promotional contest, but it seems only obvious that they are lying. A private detective was able to discover that he was in fact runner up. They found his nude self-portrait a… 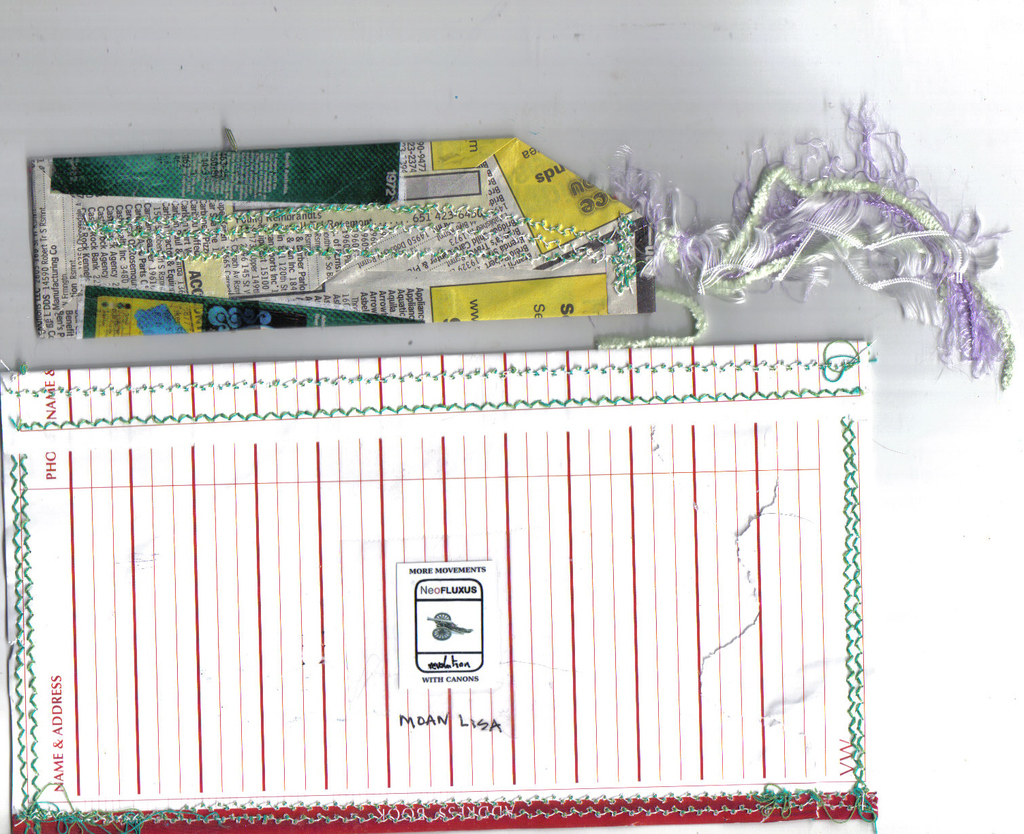 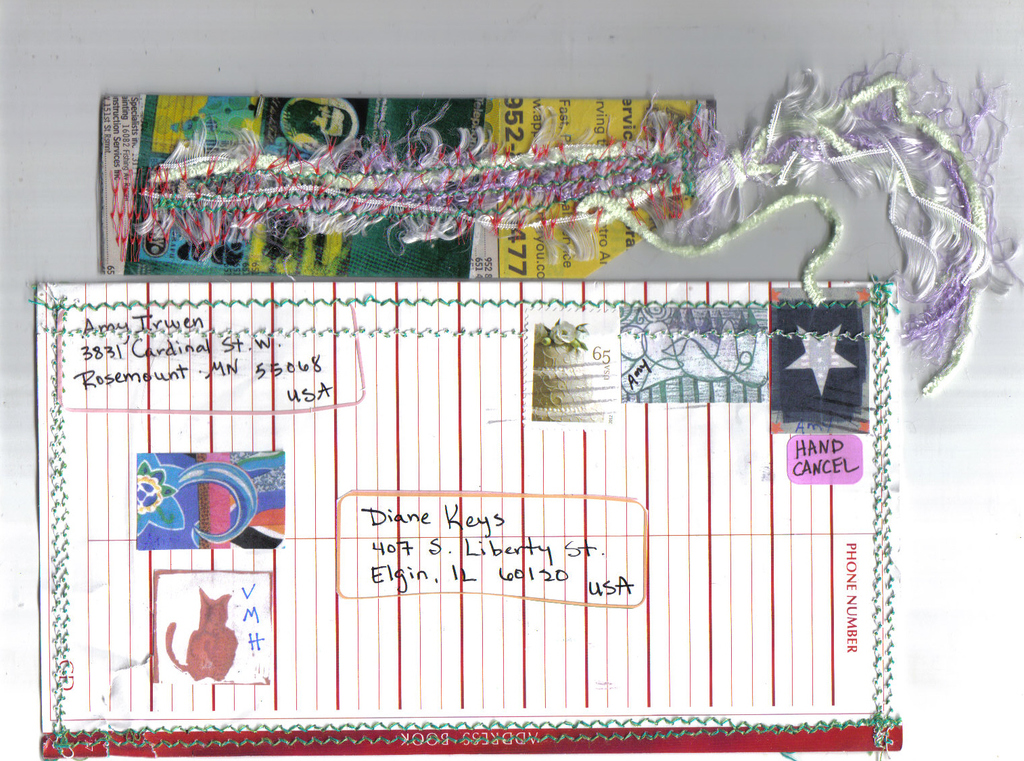 this trashpo bookmark came in a great handmade envelope. both pieces are stitched and the bookmark is a great combo of textures--newsprint, shiny… Lesley's delicate touch makes her art so ethereal and I can't help but think in some way her characters are the flip side of Nadine Wendell Mojicas' -or another aspect or interpretation of the same cast of characters in the collective unconscious. Such a gift to…