February  27, 2015, it will be again the exhibiting the works received in the post call "Paths of water" in  IES-La Foia of Elx (Alicante Spain), which marks the tenth anniversary.

It is a new and unexpected opportunity to discuss the postal art among young secondary. We hope to continue to have good reception as the previous sample.

This is the new poster.…

February 22, 2015 - Chris “Mudhead” Reynolds is widely known throughout the Eternal Network. I am thrilled to share…

Someone in Canada made a call for envelopes to mark the :-( future demise of the to-the-door postal system there and also to celebrate their birthday, but who was it? I can't find it anywhere now... any clues anyone?

A very funny piece from Antonio Moreno Garrido. Address in Spain & stamps from Posta Romana.  Who he is and what's his story remains a mystery.…

Raphael Elle: Bananas from out of the Blue

It seems that Raphael Elle has marked the International Banana Day on her calendar. Sadly I didn't know she was taking part in the call, but I'm sure I can…

It arrived in the mail box right on time for International World Banana Day.  What great timing. 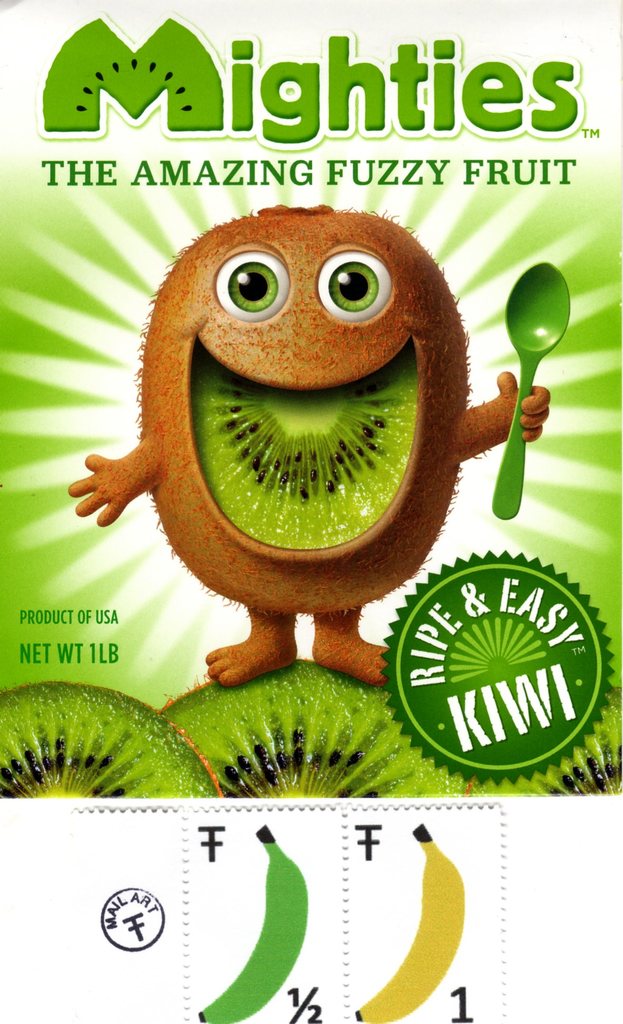 And there he is with those green eyes and kiwi smile.  And a…

World Banana Day in My Mailbox 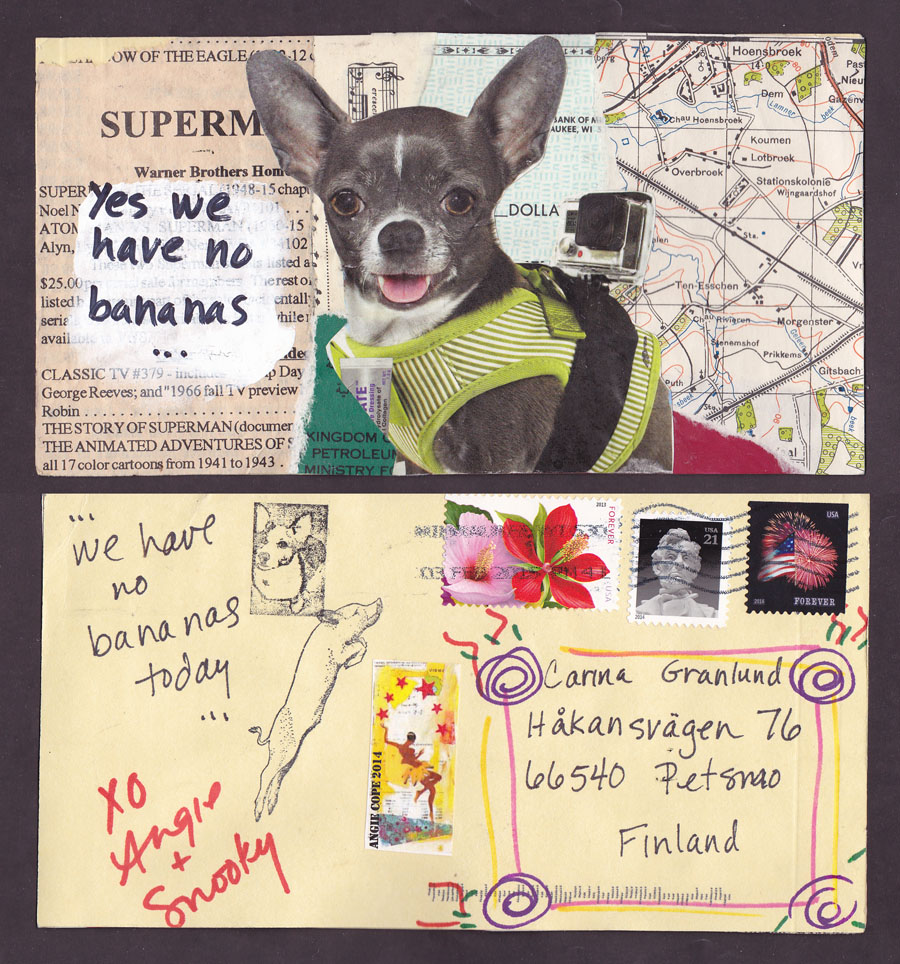 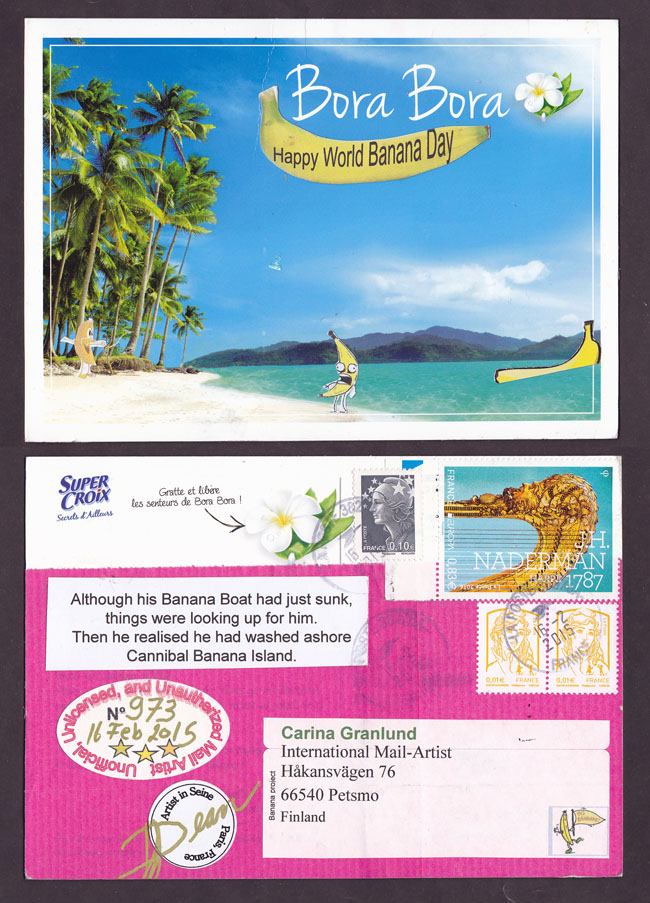 Eric sent me this happy new year envelope and card, featuring the sheep of the lunar new year, and two interesting stamps from the simple pleasures set issued in 2013; a child of peace and tea brewing.… https://www.facebook.com/tuckerfanpageJust let me know kids. All responses will be posted on the Tucker Fan Club Page.

No intercountry stamps! (but wait, I can figure this out!) I have no intercountry stamps! Used them all and after a couple of shut in days, I slipped over to the post office and THEY were out of intercountry stamps. Grrrrr. We've had a harsh few days with snow and severe cold. We're not prepared for this. We don't have a lot of snow removal equipment, and personally, in order to stay warm we have to layer and layer and layer on the…

For the man who has everything except for infinity of Banana images.

Thanks you Linda, now to find a yellow ink pad.

If it doesn't have the label, well it isn't a Nikoltsou.…

Rose starts off the World Banana Day with this little yellow number.…

Eva has an Oz postcard mail art project. She sent me a piece of Oz-related mail as a thank you for my entry. I like the dots on the O - makes me think of doughnuts. 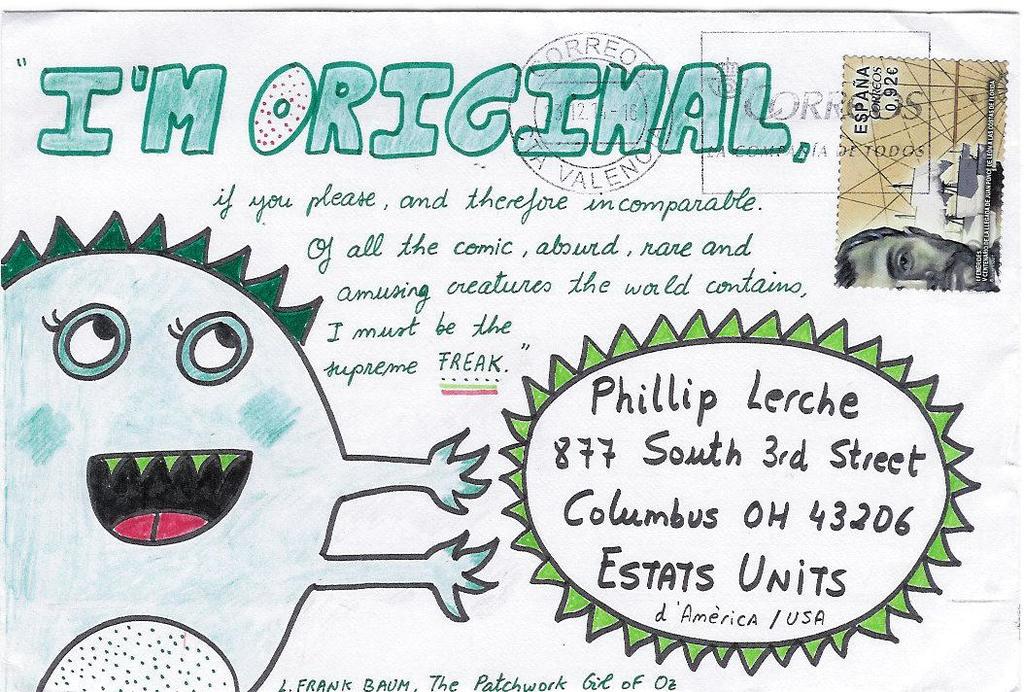 hello friends, thanks for your contribution to this exhibition to be held this May in Lecce (Italy).
I wait for your mail art 2015, announced as a year of literature in Russia, will go under the sign of the “Big Read”.
The large-scale international project that plunges the whole cities into a one familiar literary work, will also step on the lands of Togliatti.
The multileveled intercultural process concentrated around the immortal work “The Little Prince” written by Antoine de…

Kristy Joyce, your mail has landed

Thank you Kristy, for such a wonderful collage! 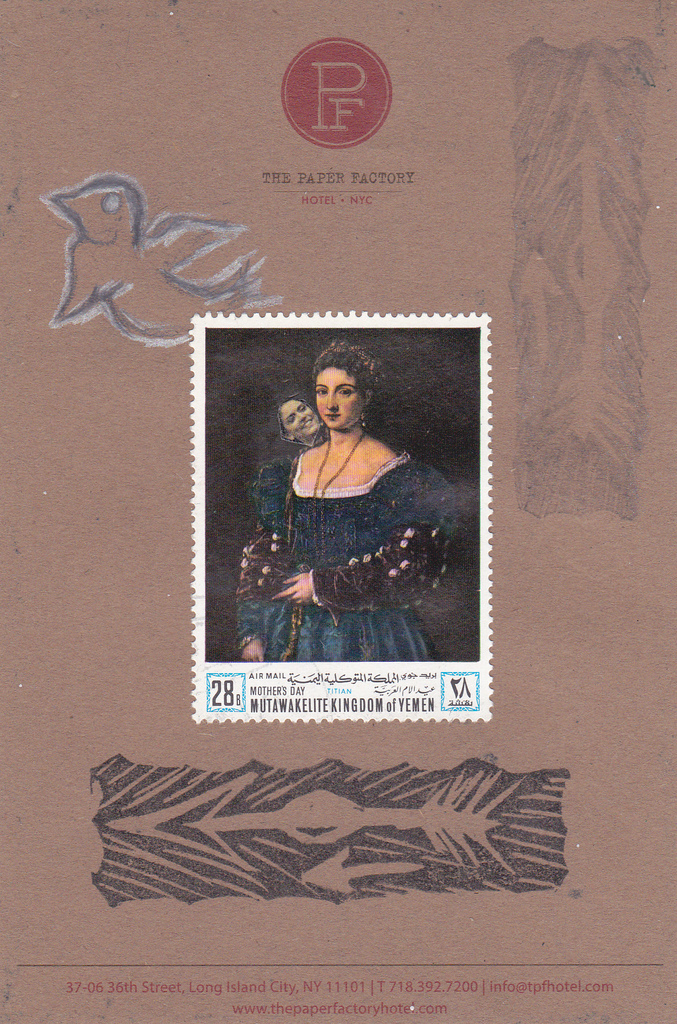