A few pieces from Katerina Nikoltsou and Simon Warren, and a work by Spanish artist Juan Pablo Chipe have been posted.  Check out all the work at the blog link:

In FinLand the New Year starts in the dark, and it continues that way until June.  I'll get you my pretty, and your little dog too!"   But wait, there is a bright side to this story. 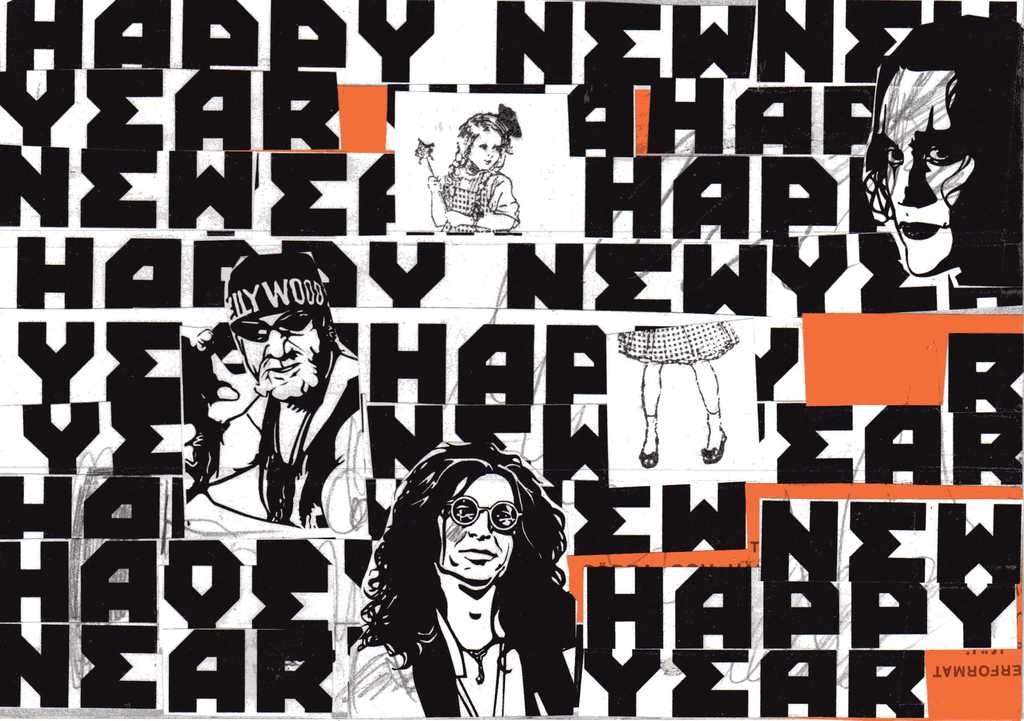 Like Mother like Daughter, a double Dutch take on Christmas baking.  So I guess we have all heard about Dutch ovens, (I see some of you running for google), but this one takes the cake ... or should I say mince pies! This is where the phrase baked to a crisp in an understatement.  Luckly Rebecca is a Mail Artist and can save the day.  Great Mail Art.  The text…

EAT ART from the "smiling doggie with the sharp teeth" CONTENTS! :-) 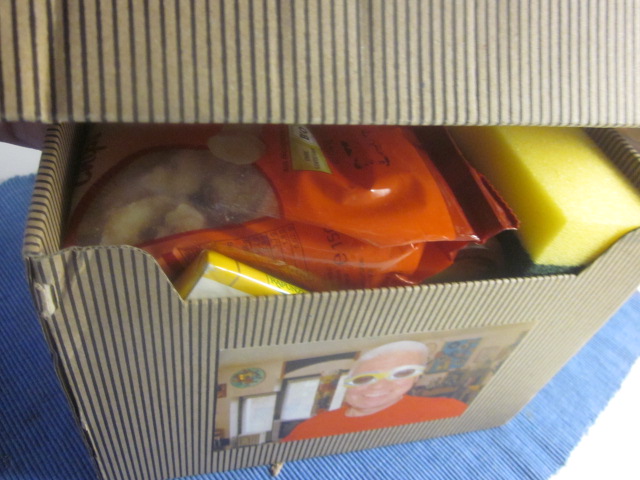 and it is amazing ALL that it contains :-) Erni knows how to pack 'em!

sponges...red, yellow, green and one BLUE, I kid you not!… 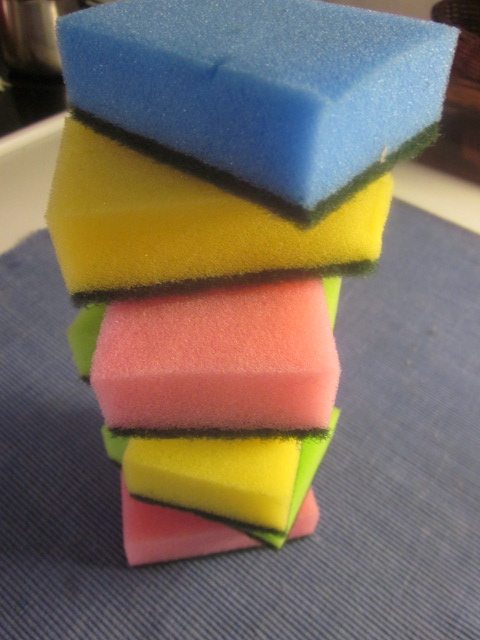 EAT ART from the "smiling doggie with the sharp teeth"? Late but not Lost! 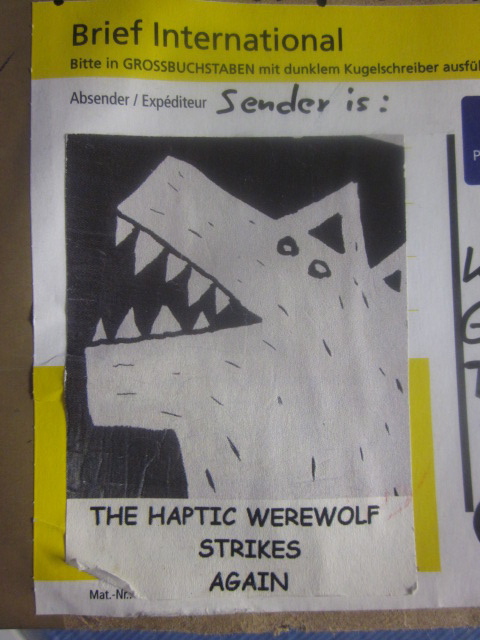 When the Haptic Werewolf smiles...all is not lost! 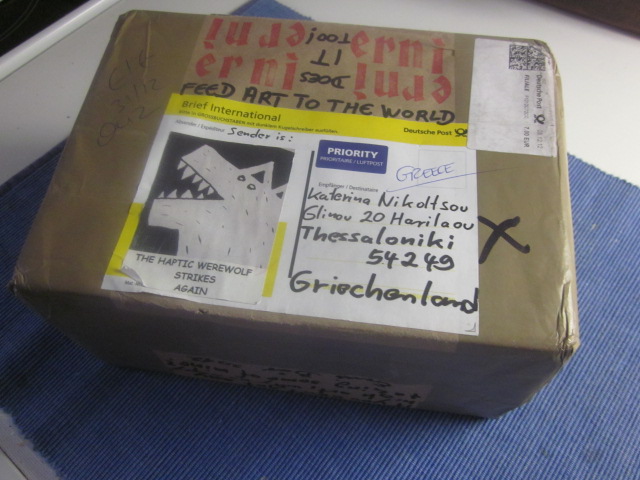 The holiday postal shuffle made this parcel from Erni in Hamburg arrive really LATE to Kate in Thessaloniki.

Usually we can send from Greece to Germany, and Germany to Greece, and…

I feel so special!! This is going to match my favorite backpack now! Badass! 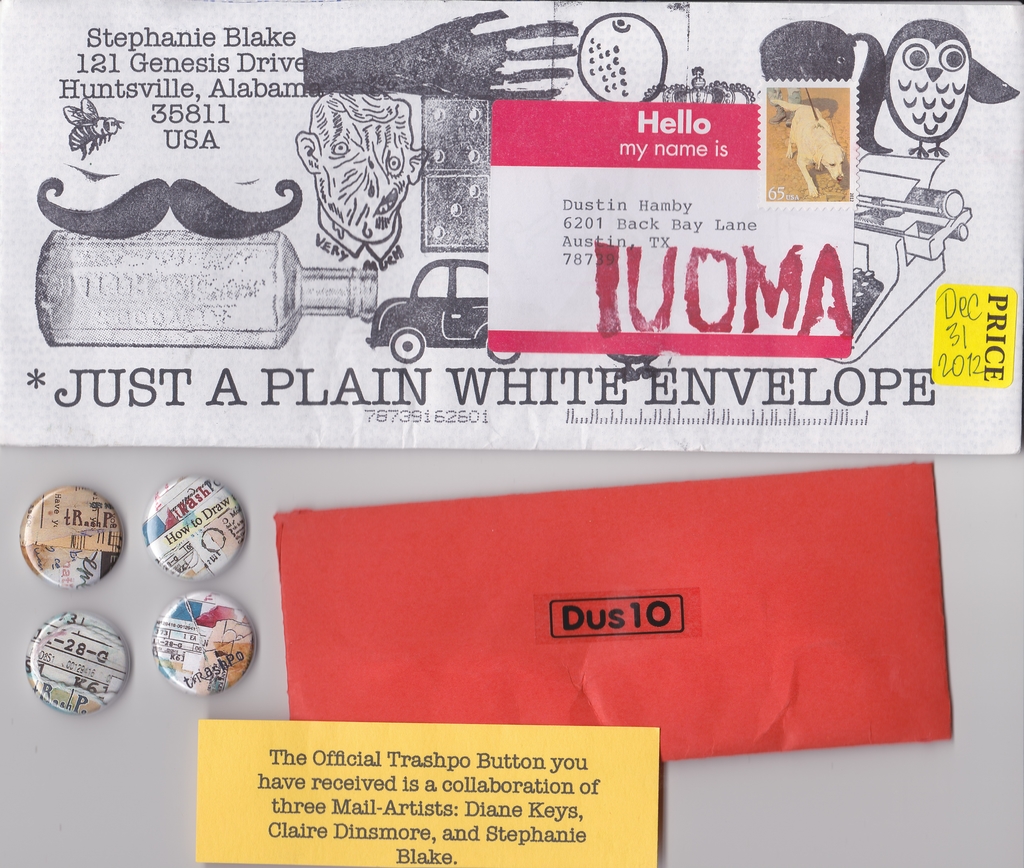 Thanks Stephanie, these buttons are just the thing! Wonderful stamping on your "...plain white…

This is a wonderful, romantic, asemic, haptic book which Carina sent me for my birthday.  To see the whole thing visit:… Or is it Shut n' Gas 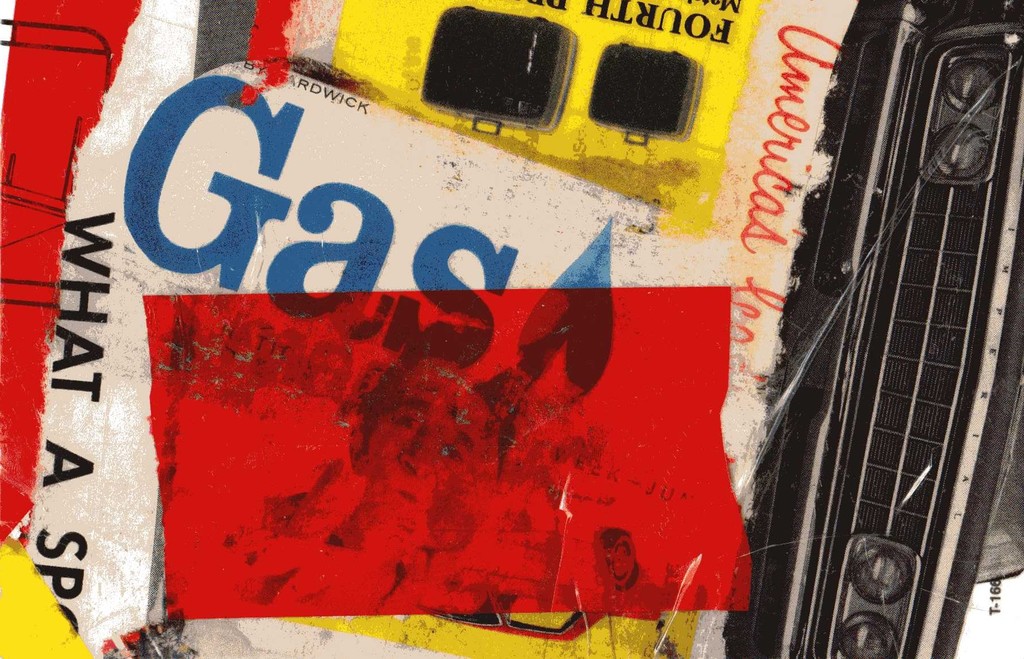 Thank you Jon and many more returns in…

Stripygoose Sue: Spring is just around the corner or just called #290 Thank you Sue and good luck with the 365 project. Ba Ba

Recycled Buddha and other treasures from the Haptic Werewolf 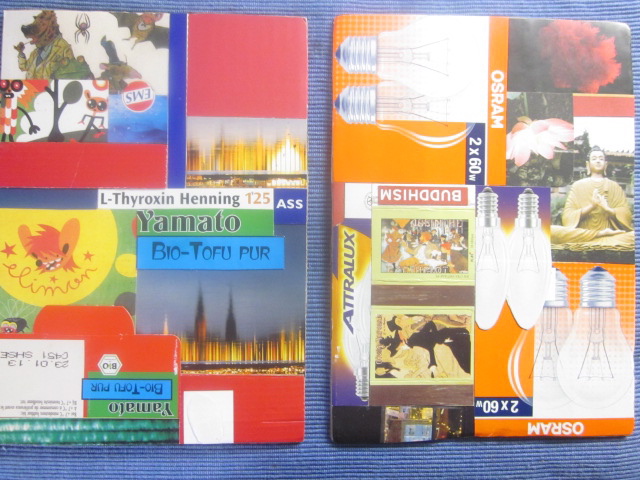 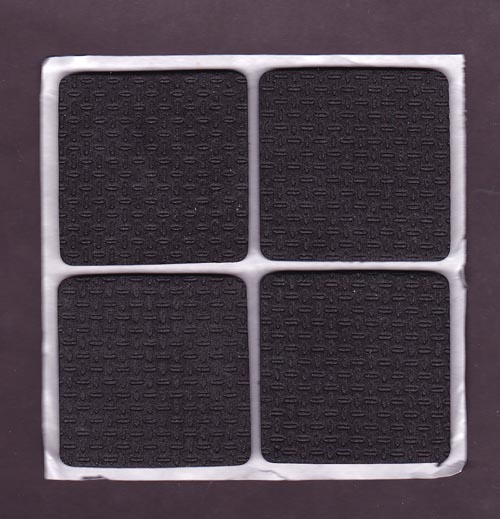 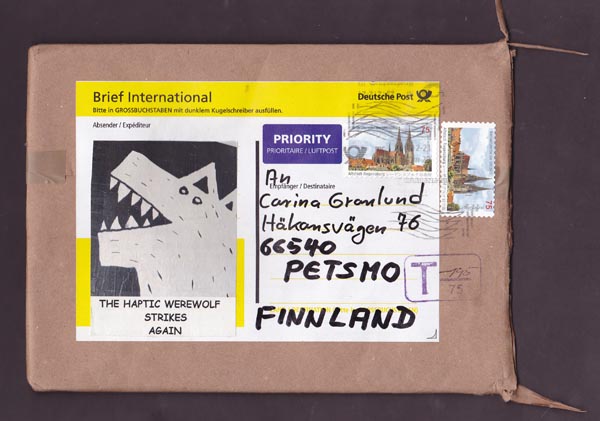 From Erni, a fun and very smart move, he sent me Malevich Quadrophony which references to two things, the great Russian painter Kazimir Malevich and 4.0 surround sound!

Below is what I found inside Erni's package:…

Diane added "I wonder what it had to say?" ....It will remain a mystery as it is hanging its head lower and lower this time of year... thank you Diane for the great Xmas Eve present...looking forward to 2013..your friend, Amy *!* That's one pretty lady on a horse!!! Thanks for the awesome Beach Lunch Marinade, Caymond! Although, I am not sure what the Hell Picapeppa Sauce…

From Asli Omur-USA. Amazing mailart postcards and so many others...! 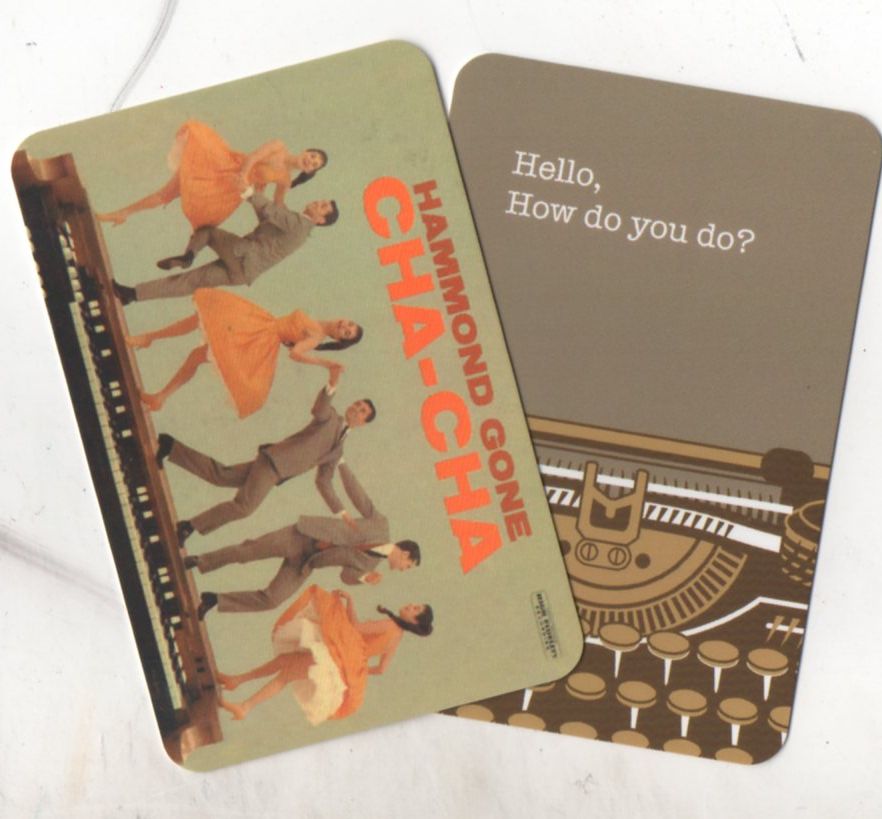 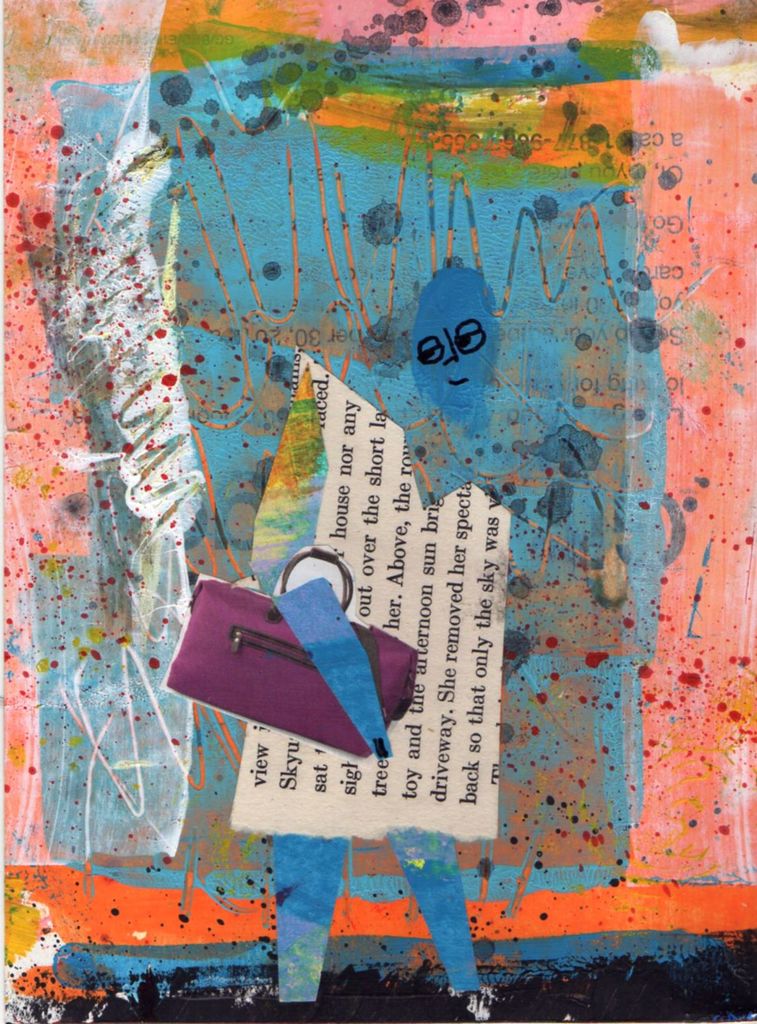 A New Home for Un<>Cut Magazine

2013 will find my magazine Un<>Cut on the web. Many IUOMA artists (and others) have had their work in the past six print editions of the magazine. This year, it has expanded to a website allowing for more content, as well as content that can't be featured in a print version.

Follow the link to the new website, and take a look for yourself. Please don't hesitate to leave comments, any feedback good or bad always makes for an improved effort. Thanks again for your past…

Phew! With all that walking we're tired. We need to find a bench or somewhere to rest. Don't worry boekie, I have a plan and it doesn't involve a dark forest. 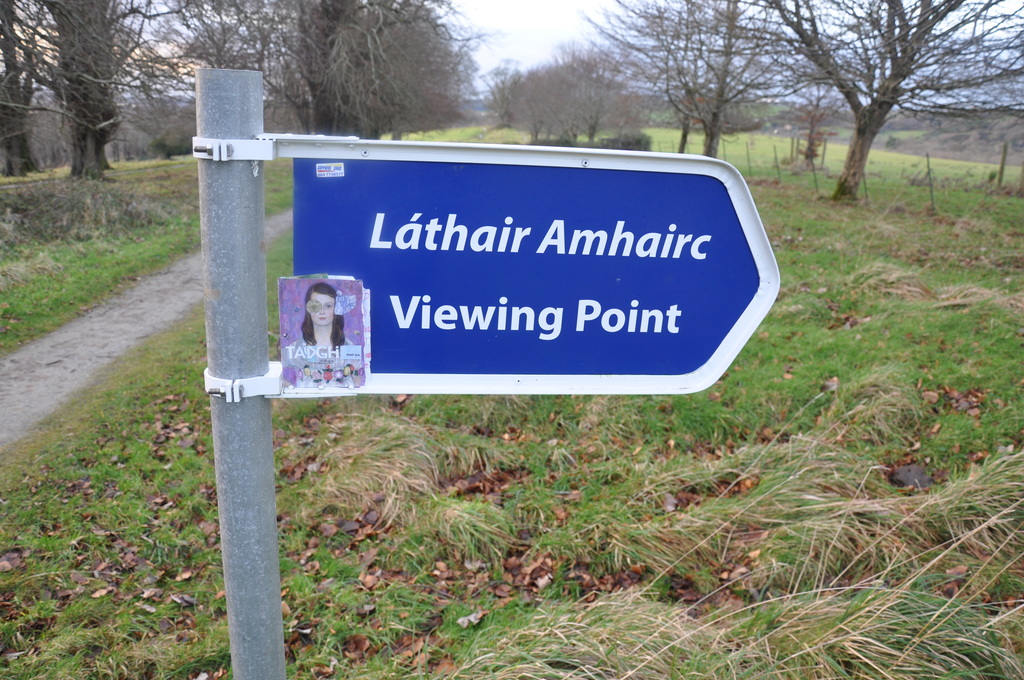 We're nearly there, just to the top of the hill. 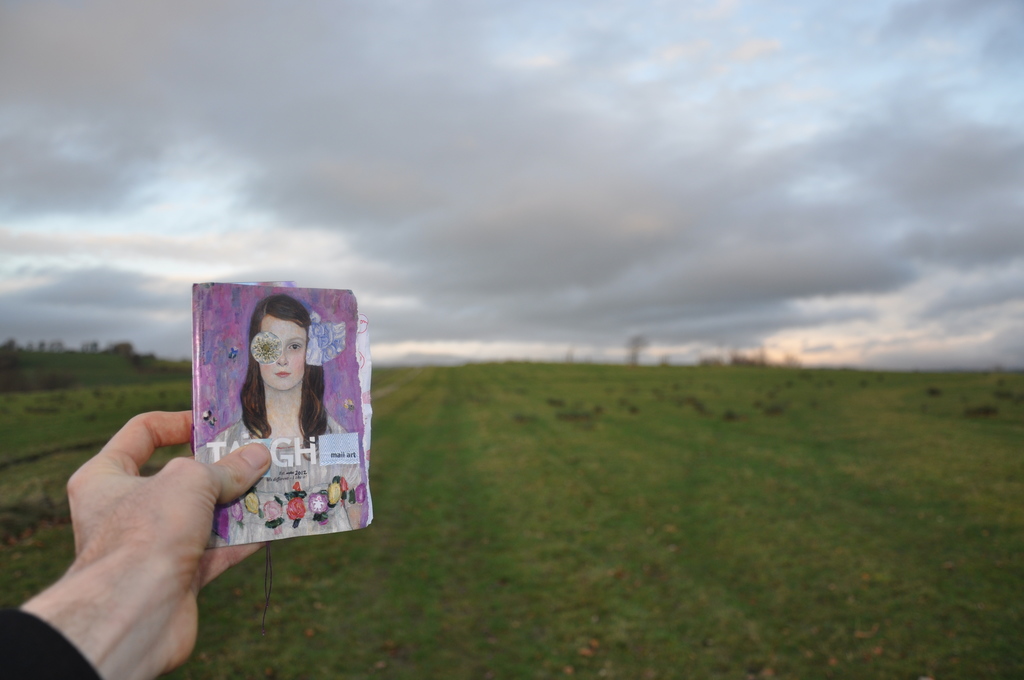 Time to turn around and see what's…

Yes, it's into the dark, but don't worry it's what's on the other side that counts. 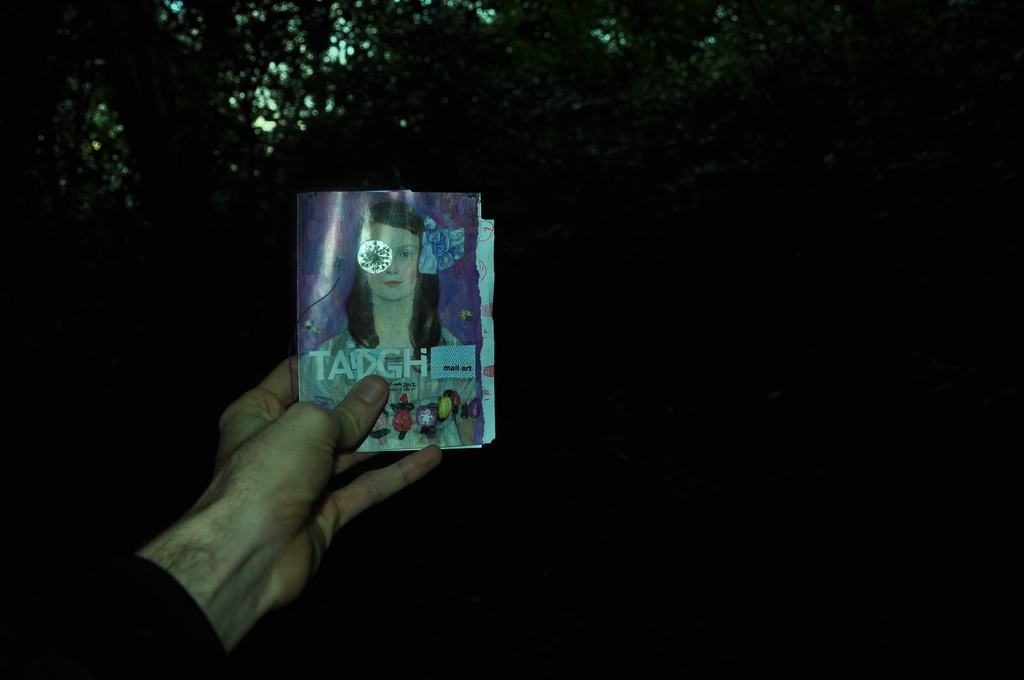 It's very dark. Boekie doesn't know what's going on, I think it wants to be back in hot summery Australia. But look ahead there's a light! We're nearly out boekie, don't worry.… After numerous attempts to photograph and film Vizma’s boekie I gave up. The reason for quitting was due, in most part to bad lighting which led to poor focus. So I had the bright idea to take my camera and the boekie for a walk and photograph our adventures. I was certain I could find more light…

A double wammy from Katerina upon my return from Holiday travels.  Yes, the 22nd of December did arrive in the end, however just in case, I noticed that Katerina mailed this one on the 20th of December, where as the Erni Christmas leftovers was mailed on the 19th of December.  Does this mean that Katerina ate all Erni's goodies before Christmas?  Post marks never lie, but it was all worth it in the name of Mail Art.…