17.11.20 Dare Val M. H., ... Sir Bradford easily illustrates your earlier point about how boring postcards can actually be quite interesting---but then, I don't think that I would ever be capable of turning a postcard into a five page letter.  I enjoyed reading  these tidbits from Bradford's nostalgic St. Louis  days. SinCelery, Richard Canard

The view is from the top of the Gateway Arch looking west.

At the bottom of the card, if you look at the the block just left of the one-block park, the middle building was the old Fur Exchange building, so named when furs trappers caught out west were brought back from the High Plains (where I live now) to vend.  It later became the corporate data center for Southwestern Bell which is where I worked starting in the late 70s.

The 4th floor corner window on the left side of that building is from where a co-worker and friend, Patti, once threw a rye bread dip after a holiday party around 1990.  It sailed and turned on its side such that the dill dip squirted across the service alley behind.  Mark, one of the janitors, walked out a few moments later to survey the scene, remove the detritus, but a dark stain remained for weeks.

It's also where one Ed Sullivan (not the TV star) walked over from his cubby to sniff Patti's hair as she sat at her desk.  She asked what it smelled like.  "An old washwoman's hair", was his smartass reply.  She promptly took a pair of scissors and cut off the bottom half of his tie.

Another time, I was running the evening shift crew processing bills, toll calls and such for over 2 million customers.  There was much snow on the ground at the time which made evacuation and head counts difficult after the building went dark so we convened at the Adam's Mark on the right side of the one block park.  Later, it was determined that a rat had chewed into a 440-volt power feed in the basement.  Computer folks talk about a "bug" when things don't go right, but this time it was a rodent that caused a problem.

Nowadays that building (was addressed 14 South 4th Street) is a Drury Inn.  A new data center was built on the 800 block of Chestnut in 1993.

The tall building next to it is where the CBS affiliate in St. Louis is headquartered.  I once saw a postcard mailed to Jack Carney from Phyllis Diller about 1980.  She was in the Bahamas and selected a card that depicted an ancient sailing ship with about a million sails on it.  Phyllis Diller wrote, "Dear Jack, / You'll notice I finally figured out how to dry contour sheets."  In that building's basement was one of the seven Fando's locations; a cafeteria open for breakfast and lunch.  In line you might see local celebrities as well as even more well-known folks like Hall of Fame sports broadcaster Jack Buck.

FROM THE GARLIC CAPITAL OF THE WORLD, GILROY CALIFORNIA, BUT NOT TO MY STOMACH BECAUSE I'M ALLERGIC TO THE STUFF "Gilroy...undisputed Garlic Capital of teh World, grows, processes and ships millions of pounds of garlic and garlic products each year. To celebrate bountiful harvests of the King of Flavors, known fondly as 'The Stinking Rose", Gilroyans each year hold their annual Gilroy Festival where, among a myriad of other activities, gourmet cooks, demonstrate the preparation of delightful recipes enhanced with garlic".

Not for me, Rose.

"(Isn't it hard to live in France and avoid garlic, Val?" "Yes, very hard. My stomach and I have no plans to visit Gilroy in the near or distant future".)

SOMETIMES YOU COME ACROSS A BORING POSTCARD THAT MAKES THIS WHOLE PROJECT GREAT FUN.

AND HERE IS ONE FROM KATERINA. 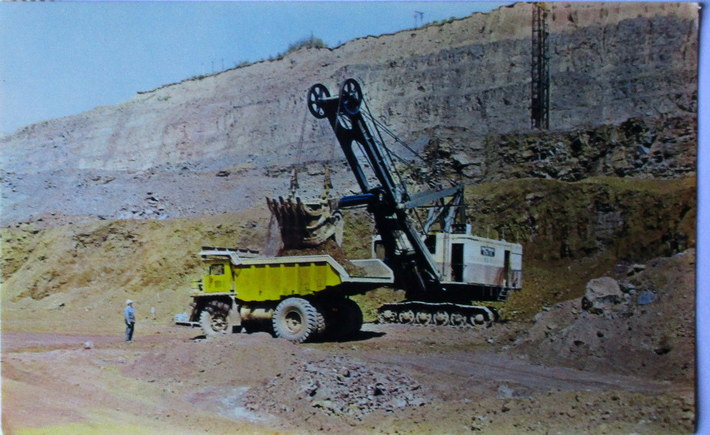 The back of the card is wonderful. The description reads " On Minnesota's 'Iron Range' iron ore is scooped up by large shovels and transported by truck and rail for conversion into steel."

It gets better in the message that Jean-Marie sent to Grandma and Grandpa in Cicero, ILL. "We're having a lot of fun -- we toured the Iron range yesterday and saw about 10 mines and as many iron ore mountains of stockpiled ore. These mines are about a mile across and two miles long. Paddy still hasn't caught any fish."

(Poor Paddy, he might be better off fishing in lakes or rivers than in iron ore mountains.)

FOUR FROM KATERINA THAT ARRIVED SAFELY 6 DAYS AFTER BEING POSTED.  Thanks MomKat 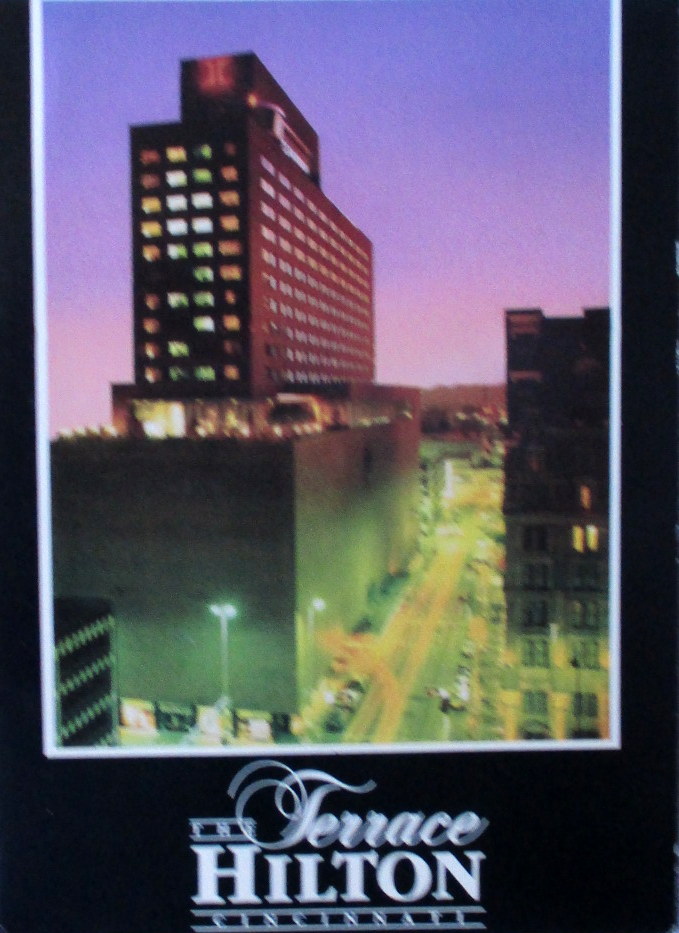 350 guest rooms, located near the Skywalk, walking distance of all sorts of exciting things, etc. And, "The Gourmet Room is rated four stars by the Mobil Travel Guide who says 'Outstanding --worth a special trip'" The back of the card says "New Orleans -- City of Enchantment", and to prove it here is the truly enchanting Convention Facility. Its enchantment (honest, I'm not making this up) comes from "..it's 130,000 square feet of unobstructed space, capable of seating 14,000 people. This $13,500,000 structure is one of the nation's finest facilties."

The Boyds who sent this card were enchanted. they wrote "This is where (we?!) will have our dance. Looks great. Met a lot of friends so far." 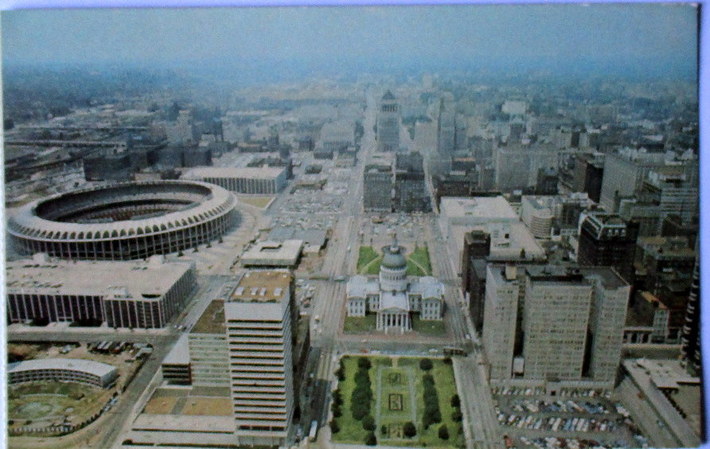 The Arch "...looks down on the Old Courthouse, the Old Cathedral, Civic Centre, Busch memorial Stadium [not Katerina tells me named after the Bush Presidents] and the Spanish Pavilion.

You have to look very hard at the picture to see anything of the Arch, but do not despair, for here it is... 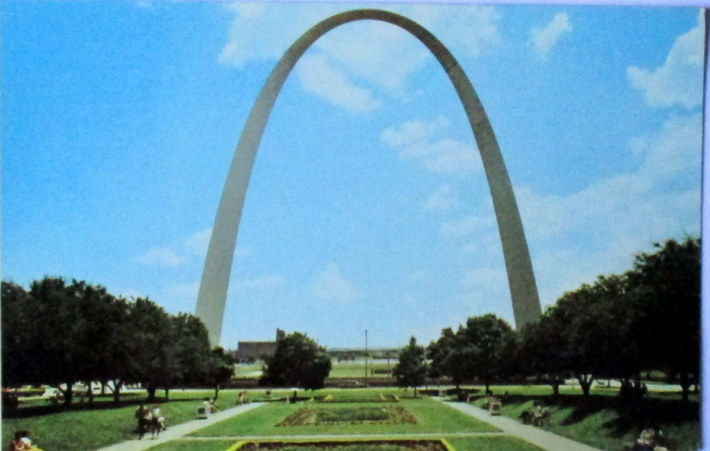 Here it is "soaring 630ft into the sky above St Louis symbolising St Louis' historic role as Gateway to the West."

(No, Richard C, it's not a giant boomerang) 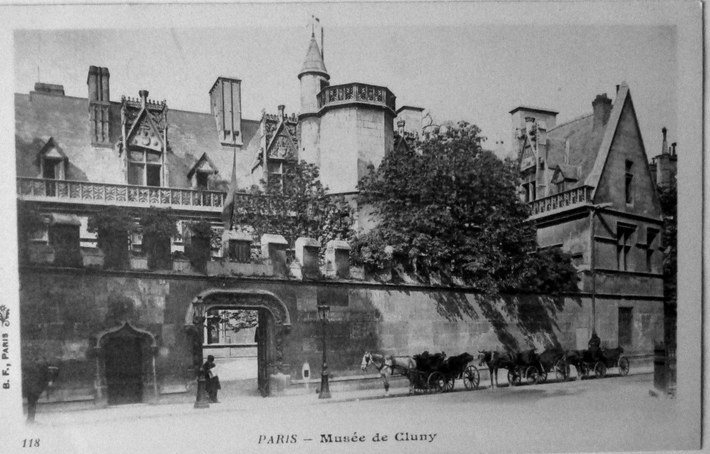 One of my favourite Paris Musées -- strongly recommended by moi 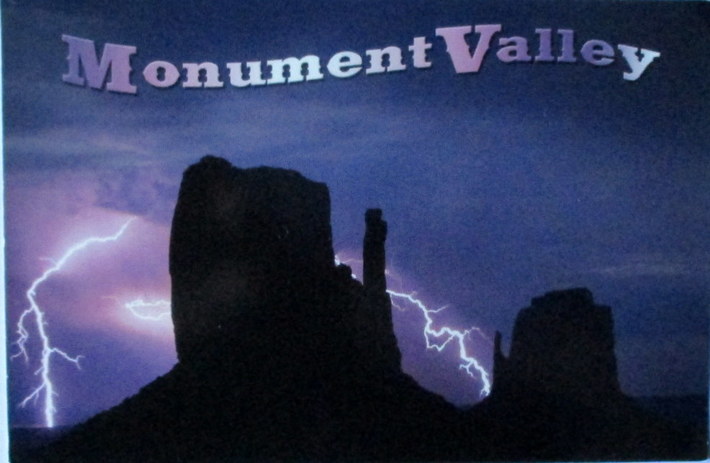 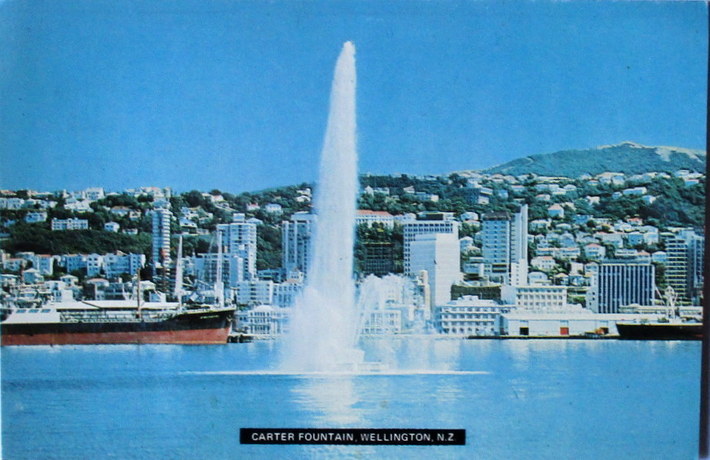 "This spectacular fountain was donated to the people of Wellington by Mr H.A. Carter in memory of his parents. It is illuminated by high-powered flood-lights and plays in a 15 minute cycle with the main column rising to 46m (150ft)".

It also has a twin in Geneva. Do two fountains each with one cycle make a bicycle?

Bonjour Gang, I think I've got a title (and subtitle) for my book:

WISH YOU WERE HERE --NOT! A Collection of Boring Postcards

It's very similiar to Nancy Nosegay's suggestion (see my comment on it from yesterday, but i) I've add a 'NOT!', and 'Collection' is better than 'Compendium', the latter referring to a complete listing.

More about the book later.

Thanks Heide for this Lost and Found Boring and Interesting Postcard 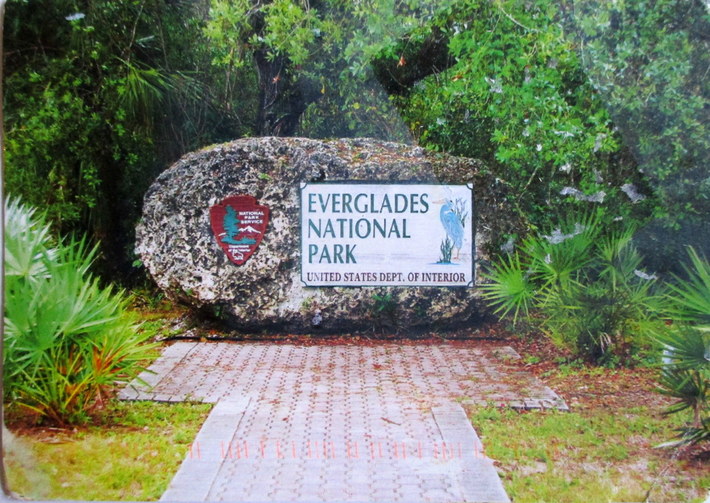 Why did you loose it, Val?

It got lost amongst the 600 Postcards I'm sorting out and writing about. But I found it!

Do you often loose things, Val?

Yes, all the time. I once lost my 6-year old sister on a beach in Italy. the police found her, she was safe, and returned to the hotel

Why is this an Interesting Postcard, Val?

Because it has a Real Rock'n'Roll US Post Office "Return to Sender" label on the back. 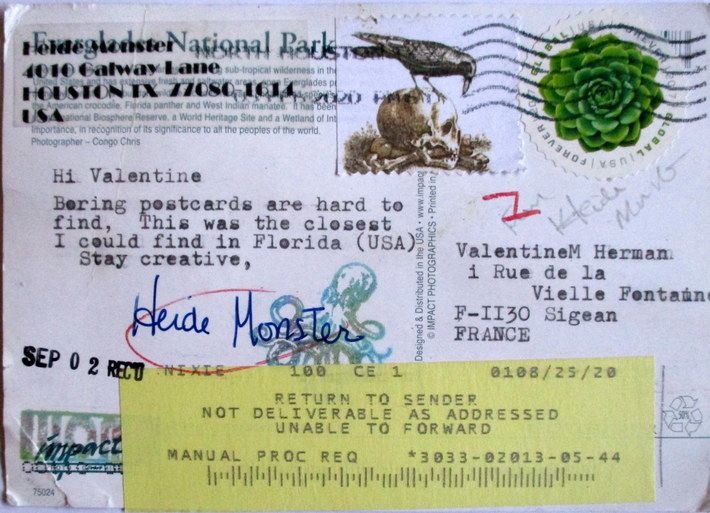 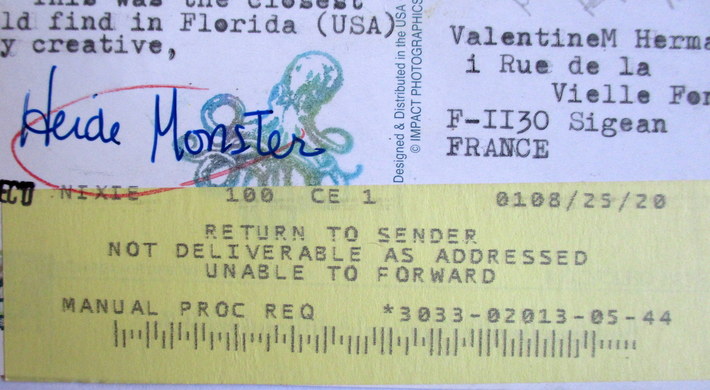 Nancy: I have a chapter called "Wish yiu were here -- Not." It includes Boring Postcards including a young offender's prison, someone being treated in a hospital, a hospital ward, an island on fire, etc. I was considering using "Wish..." as the title, but with the word "Not". I like your subtitle too.