Bits that I use from advertising, magazines, newspaper, etc. I don't worry about attributing to it's source, though Shepard Fairey got into a bit of hot water using the photo of President Obama to do his now iconic illustration. If I use an illustration that is prominent in my image, I'll give attribution to the illustrator, like in my bird series. I'll note the name of the illustrator on the reverse. I'm not sure the illustrator will EVER see my piece but I feel better doing that. I don't think Rodchenko ever noted where he got his bits and pieces for his collages, or Rauschenberg or Schwitters or Hannah Hoch. What do you think?

Permalink Reply by Carla Cryptic on July 6, 2010 at 12:32am
I agree - I feel it's best to acknowledge other people's work which is used by us as artists.

It's true that many famous collagists didn't give credit in terms of where their images came from but that was a different era and, besides, that's them, not me. I feel it's important to do it.

Permalink Reply by Henning Mittendorf on July 21, 2010 at 12:53pm
I agree too.
All artistic works are mixtures of found pieces, pictures, ideas etc., inclusive other people’s art work as a whole or in parts. Important is the fact that the mixture creates a new expression, shows a new aspect, view, gives new impulses. In this connection it is natural to name the used art work in respect for the author, except this is superfluous as the work is well known.
As to new paradigm shift, especially system's theory, the models and patterns as spontaneous ideas of spirit don't exist in anybody's head or other isolated structure, but within the open reciprocal effective process of perception, thinking and doing, of mental experience, cognition, and of its coordination, communication, i.e. within the network's organisation itself, for instance within the one of mail art, art, life, totality.
It is true, also the network’s artwork as a rule is process and product of a creative cognitive autonomous artist, especially of his will, but it doesn't find herein its end.
In the network it is more important that art, the artistic networker as well as the public are quite more applied, reciprocal effects, to each other within viable living together than the fact that a work stands opposite to the observer as “ob-ject", structure and speaks to him value setting. Network art in so far is “workless", it is aesthetical, i.e. artistic, participation in an incomprehensible reality's event, in what is happening.
Primarily the centre of the network and its artworks is the relations' wickerwork between the networkers, the community of human heads, cognitions, of artistically flowing and balancing of interconnected cognitions, and it is not a subjective consciousness. And this centre is the new identity of the artists and it is their new
message. The artworks aren't expression of production and reception, but of participation and sharing, of dividing and informing, a viable structural dance in the choreography of networkers' living together, of their cognitions' relations.
It is doubtful if the artists following the new light of paradigm shift and trying to work in the new field of creativity will gain this new identity or if they will fall in an identity's conflict. For the reaching of the new identity will only be successful, if the artists especially are willing, to leave the sphere of the previous and still present institutionalized forms of art and at that to acknowledge the new general conditions of networks and of networking as well as of the new paradigm shift.
These conditions do say that a network’s artwork as un-embodied artwork neither can be an original nor that it can be protected effectively by a copyright. “Mental property is just such a thing that belongs to allotment gardens and similar matters...
They (the authors who are proud of making all by themselves) don't know bigger buildings than only such that a single person is able to build...” Bertold Brecht

Without
reading anyone else's reply/opinion I will first write MY opinion and reply to
the question/opinion you put forth on the topic. I think our access to print,
dance, music, images, art, photography, all being a form of art, has
drastically changed in the last 10 years as the growth and sophistication on
the internet has grown, further development of available technologies, apps and
programs....finally, users today are far more competent in it's use more than
10 years ago. With that being said, there is a huge advantage today for an
artist to enjoy and appreciate other artists work, whether it be on You Tube,
Behance or Flickr. We are all artists to one degree or another...our gift
should be shared but it should also be respected and not stolen with a signature
smudged out and replaced by another.

try to think about how they would feel is it happened to them , we need to share and we love

to appreciate what others have to offer...so I think most consider this a breach of their fellow

artists, and a  un-written rule and a breach of our own integrity. It's theft....BUT, there are
many occasions where someone has used an image to promote a cause or paste it in a

school assignment collage and it is done innocently.

I still think there are many among us who don't even realize they really could actually be held culpable for using an image in anyway.....I didn't. I own an online business and the web desingner I hired to create the pages of my online business  website actually used a copywrighted image. About 2-3 years later the legal owner of that one image (which I consider graphic-art) had thier attorney send me a cease and desist letter and furthermore demanded $18,000.00. At first I was in shock, thinking wait, I didn't do this, my web designer did.....in the end, I was liable and had to pay, and later I was able to collect the re-imbursemnt of $18,000 from the web design company.  The comapny also admitted to me that they had fired several designers who did not take watermark/copyrighted images seriously and they had other customers with similar compalints.

So, getting back on track with re-using art.....if it's not protected with a copyright, watermark, etc....it is vunerable.....as an artist I think we should respect our own, give credit where credit is due and know for certain if the works we are using are possibly  copywrighted , watermarked or not  should #1 )know how to detmine the fact (photo software) to protect themselves and avoid using the image, #2)  give written credit on any pieces or part of the work if from someone else's time/talent and efforts.

My online experience was shocking because I was nieve in many ways, I put a task in the hands of a highly reccommended web design company they didn't really take image copywriting seriously but what's worse, I put the trust of all that in their hands and I was the one liable and still had to pay.

I could be wrong....but is there any mailart today copyrighted/watermarked ?

FYI My son is a graphic designer and teaches a class on ethics in design. You really did have a bad experience. Perhaps some people might copyright their mail art, I don't know, most of us just make it and send it out into the world. If someone appropriates my work without attribution, I wouldn't like that particularly, but I don't think that anything I've done will be making anyone a lot of money.

Many years ago, in another career, not art related, I used to do a workshop that I'd developed. I mostly worked in my state but did it at conferences in other states, a couple of times. After a number of years, I learned that my workshop was being done by someone, they had no idea where there material had come from so no recognition that I'd developed it. The person who told me about it, said that they let the presenter know whose material they were using, but so it goes. My workshop could still be used for all I know.

I personally try to give attribution when I can. It's the best I can do.

Sorry you had such a rough jolt out of "naivite" (or however it's spelled.) 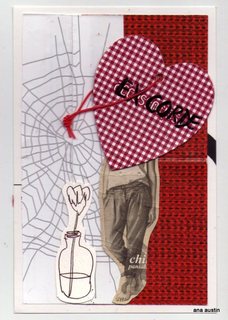 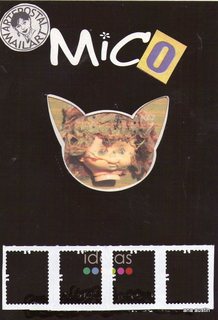 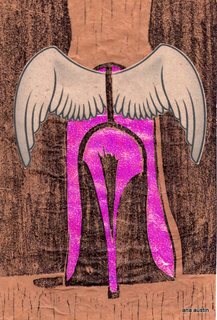 I think it's okay as long as for personal use no exchange for money. As long as original artist is acknowledge it's fine I do a lot of collage and my work consist of paper ephemera so can be difficult to say who the work is from.

There's the complication of rubber stamps and angel policy. Best to check first.