The truth behind the "R. Mutt" 1917 FOUNTAIN readymade

Excerpt from https://en.wikipedia.org/wiki.net where you can check the source matierial: First an object of scorn within the arts community, the Fountain has since become almost canonized by some as one of the most recognizable modernist works of sculpture. Art world experts polled by the sponsors of the 2004 Turner Prize, Gordon's gin, voted it "the most influential work of modern art." [20] [21] As recent scholarship documents, the work is likely more collaborative than it has been given credit for in twentieth-century art history. Duchamp indicates in a 1917 letter to his sister that a female friend was centrally involved in the conception of this work. As he writes: "One of my female friends who had adopted the pseudonym Richard Mutt sent me a porcelain urinal as a sculpture."[22] The piece is more in line with the scatological aesthetics of Duchamp's friend and neighbour, the Baroness Elsa von Freytag-Loringhoven, than Duchamp's.[23] https://upload.wikimedia.org/wikipedia/commons/thumb/f/f6/Duchamp_F...

some interesting syzygy of recent observations and perspectives that became further scoping upon reading this and some of the links within its links. 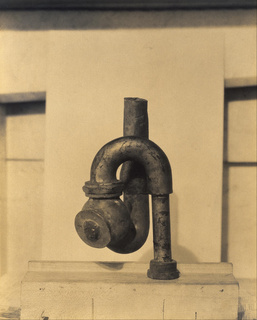 "God" By Baroness Elsa von Freytag-Loringhoven and Morton Schamberg seems to be the most revealing to me. Two weeks ago I posted a photo to instagram that was inspired by my particular position and state of mind before, during, and in the afterglow of shiting into the "shrine of the porcelain god" as I've heard it, though, usually associated with tequila by that context.  I was unaware of Elsa's God and Morton's photo of it, so, I feel especially attached to this work now thinking that my life and a moment of my own thinking prepared me for it and that the above discussion initiated at a time when I've never been more fit to consider Elsa is rather nice.

The underside of my sink is bare, also interestingly enough the building is from the 1920's. So my obviously bare ass is on my toilet and I'm looking at the bare guts underneath my sink... actually I just got up and decided to write this from the toilet and I've just finished a shit. Whilst shitting the piping of my sink is probably a foot and a half at most from my face. It's also worth noting that I'll often arch my feet on to the tip of my big toes (which raises my knees) and then I'll bob forward and backward like an orthodox jew at the Western Wall (which really helps get a good one out). Also worth noting that placing a piece of toilet paper in the bowl and it, jesus, floating on the surface of water  will greatly reduce drop down splash up, especially the kind that hits your sphincter before it completely closes.

Shitting two weeks ago I decided that this knot-of-pipes by the nature of my frequenting it was some sort of contemplative shrines and I decided to take a picture of it as it was before me that was a little more ambiguous than the two feet on the bathroom floor pictures people seem to love sending to one another... Back to my state of

altar, meditative totem or what have you.  My words at the time were "Modern Shrine of Contemplation." Though I like the idea of it being "God" and further contributing to the pshythology, or coprophanity, by having the Toilet be the shrine in which the scatrificial act of taking shit from one's body reveals God.

As to how a urinal titled "Fountain" plays into it, I've got to wipe up, wash my hands, and come back to the toilet later tonight or in the morning.

Permalink Reply by Bob Jones on April 5, 2016 at 9:21pm
"Nearly one hundred years later and finally the Baroness gets credit where credit is due ..."