Hi I am new here because by chance I saw your question. I have used Fontographer to create my own fonts from drawings and it is easy and free. It will work with W7, I think. You need a painting /graphic program to create tiny drawings of each…Continue

Adapted from Wikipedia Asemic writing is a wordless open semantic form of writing. The word asemic means “having no specific semantic content.” With the nonspecificity of asemic writing there comes a vacuum of meaning which is left for the reader to…Continue

Can ideas like this be included in the asemic type of development?Jazzy script in a kind of shorthand notation?Continue

The Push and Pull of Graffiti

I am always fascinated by the art that develops when the Graffiti Artist tags a blank space and the person who hates Graffiti covers it up ...Tag - Cover-up , Tag - Cover-up etc...Continue

Wondering if people in this group have any recommendations for (hopefully free!) programs out there that convert our stunning characters into truetype fonts? (I'm using the 2014 Long-Term-Support version of Ubuntu Linux and Win7 operating systems,…Continue

You need to be a member of Asemic Writing for Mail-Artists to add comments!

Comment by cheryl penn on March 16, 2011 at 11:41am
P.S. Bruno - yes, great point. Katerina - when I look at some of your Greek letters - yes, to me, they look wonderfully asemic. The environment, yes, a constant source of inspiration. After your comments btw DVS - I am SO rethinking asemics - so great - thanks :-)

Comment by cheryl penn on March 16, 2011 at 11:28am
Hey De Villo - NO value judgements - no, not from you :-) just floating opinions (all of us) until we EACH find a comfortable postition??? I'm all for disuccsion by the way - AND NOT too much thinking before posting - sometimes the best ideas are the first ones? The ones that immediately spring to mind? So, good for you :-) So, no I dont think its about making value judgements at all, but personal opinions - thats allowed! In an open forum, amongst friends, being able to agree to disagree - that great! Thats the POINT of debate. Academics? We have gone backwards and forwards about that :-)

Great discussion! Y'all are sharp and I need to think before I post.

OMG! - I am not trying to do another Sandpo with the New Wave moniker. I was looking at some New Wave cinema stuff - classic Jean Luc Goddard so I carelessly threw the term in some things I wrote yesterday. It's a gross misuse of a label. Personally, I won't use it again.

Kat - maybe my retraction of New Wave helps in the exploration of the idea about finding asemic inspiration in ancient texts and objects that were obviously never considered conceptually to be asemic. Going back into history and prehistory to find ideas - let's encourage that. It does make my point about context though. Try this: Re-framing things from the past in the present re-contextualizes them, gives them a new or different meaning.

Bruno - your comments really made me think. Thanks! I see you've done some work with symbols from the natural world yourself. I still think this area is fair game because when you look at glyphs, alphabets, etc. many symbol forms are derived from shapes that appear in the environment. I can certainly see contemporary asemic writers looking at their environments for forms too.

Bruno - the Gordon Matta Clark comparison to John Bennett's post works for me. John posted a photo - maybe it's also the idea of using photos that aren't highly manipulated in the asemic arena - asemic photography? - I think that aspect opens possibilities too.

Bruno - My comparison of John Bennett's work to a urinal in an art museum is misguided and overly dramatic. This post gets longer and longer as I retract just about everything I said.

Cheryl, you know me, I don't want to run the risk of interjecting academic categorization into this. I can be guilty of that. I certainly don't want to contribute to a position of making value judgments about what is or isn't asemic.

You know - I find this found/randomness thing is probably the biggest bone of contention among avant people today. You can pull together groups. Everyone agrees on everything - until the found art thing comes up, and people start debating with a great deal of passion. I think you just have to allow that people are going to have different stances and respect what they are doing. John Bennett's post actually made me think of David Chirot - so much of what he does involves taking images from the urban landscape.

Well. I can't spam this stream any more. Thanks for the thought-provoking posts.

Comment by cheryl penn on March 16, 2011 at 4:14am
New Wave Asemic Writers - I think you  had better OWN that one! It will appear in literature about asemics in the future BUT???? Will have to think about the postings, are they asemics??? Same as the Phaistos disk - is it asemic? I am not persuaded. I can feel the brewings of discordant rumblings here :-)) Comment by De Villo Sloan on March 16, 2011 at 1:12am
Dear New Wave Asemic Writers, I draw your attention to John Bennett's post a few frames down. Anything is OK as far as I'm concerned. I'm not objecting. I think an interesting point is being made. John posted a picture of a brick and concrete wall with holes in it. I like it a lot. I don't think it's the conventional idea of asemic writing other people are posting. Rather, it broadens the idea and opens up new possibilities (1) Found objects can yield asemic writing (2) Shapes in the environment formed by nature and chance can be a source of symbols; their arrangement can provide syntax and form (3) John also presents the contextual situation established long ago by Da Da: If you put a urinal in a museum as part of an exhibition, does that make it art? John placed a picture of a wall in a stream of asemic images. Does that make it asemic writing? It certainly begs discussion. I really like this broadening of the field of possibilities.

Comment by De Villo Sloan on March 15, 2011 at 2:22pm
These postings are a wonder to behold. Wow, everyone just "gets it." Gold stars in my book to Sue Bowen and John Bennett for recent posts - favs of mine.

Asemia - no vaccine has yet been invented. By David Stafford: David Stafford strikes again - the reverse side of his asemia card: 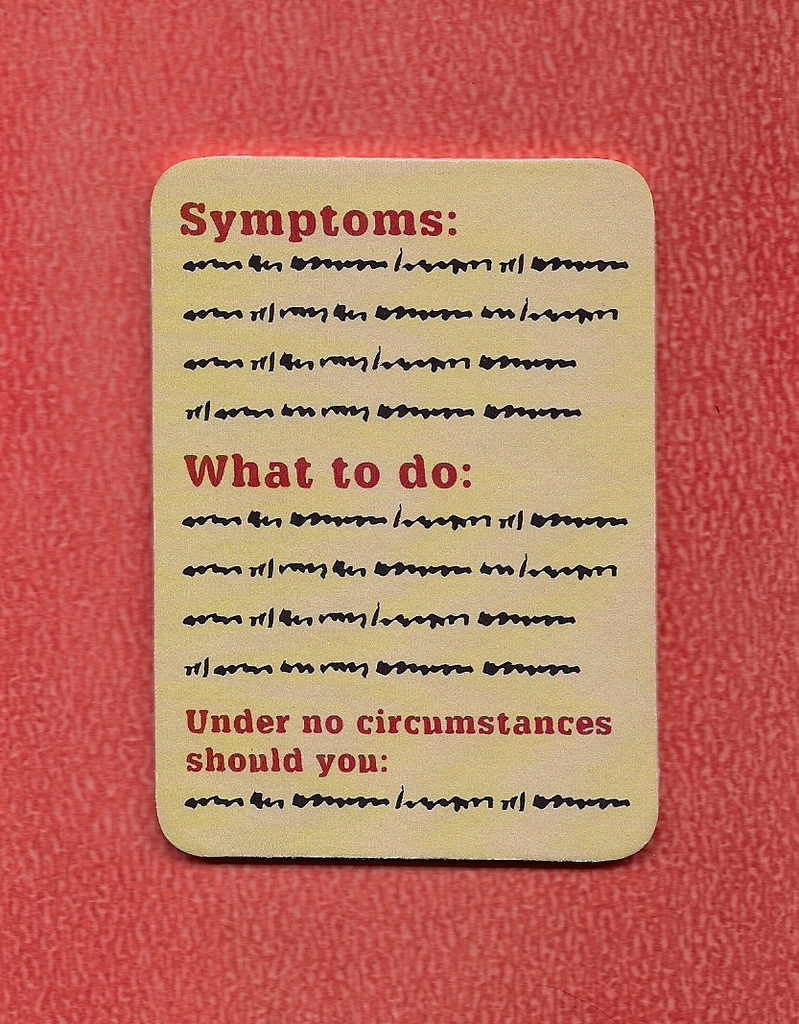