Please put up your work as you go so we can all be inspired and excited :-)! Thank you Angie and Diane - looking great! Angie- a step by step, from this first stage is a FAB idea. Random chance hhhmmm??? Looking forward to more :-) X

I would like to participate in one of this Collaborative books, but how this works? this is like a Add and PAss? so please can anyone explain this to me? thanks

Hello Helder :-) - no add and pass. With these collaborative books each participant must make copies of their work and post to the other participants of the collaboration. This way, at the end of the project everyone gets a book. This is my bound copy of Asemics 16 #1 - #3

So i create some Mail Art Work, then i sent by Snail Mail a copy of the same to all the participants of the collaborative book, its this?

Thats it, yes. Some people make individualized pages, some people make copies.  There is generally a limit put on the number of participants - for example, this VSPO book is 15 participants per book - so its 15 copies of 2 x A4 folded sheets + 8 pages posted to each participant. This call is full, but when we do another I will let you know if you are keen to participate :-) X

so People always sent Copys not originals its that?

As Angie says - a combination from people is also sent - copies that have been handworked/painted individually - thanks Angie - and thank you Helder for the interest :-) X

VISPO One... work in progress in Greece: Of course there will be  BLUES... and of course there will be GREEK.... 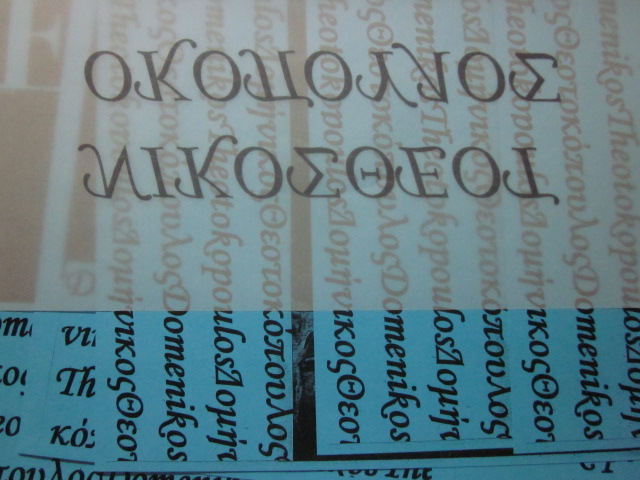 and of course there will be TRANSPARENCIES!..or layers of rice paper?

Love this Kat-Greek is such a visually beautiful language and overlays make everything like it's gift wrapped!

Katerina - thank you for posting your sneak preview - FAB! I hope all the vispoets involved in the project are starting to get on track/thinking about this project after The Season. Happy Monday to you all - keep the images coming :-) X

Below is not what my contribution will end up being, so it is already obsolete, but you magnificent and fast artists have inspired me to put up an exploration begun yesterday. It isn't complete, and it doesn't much resemble what the pages will be like in the end. The main reason for that is my final decision an hour ago to make them an homage to Hannelore Baron, so the approach is rapidly shifting, from Kline to Baron. Below the scan is part of the Wikipedia entry on Baron since she is not well known. Cheryl, I promise to post some results of the shift very soon. Hannelore Baron (June 8, 1926–April 28, 1987) was an artist whose work has become known for the highly personal, book-sized, abstract collages and box constructions that she began exhibiting in the late 1960s. Born in Dillingen/Saar, Germany, she and her family fled persecution in Nazi Germany in 1938 and relocated to the Riverdale, Bronx area of New York City. Without a formal art education, her interest grew and was nourished through a variety of art classes at adult education and community centers. At age 40, in the mid 1960s, Baron combined her knowledge of a variety of art making techniques (watercolor, drawing and printmaking) and began making her first collages. In the early 1970s, Baron established a studio and devoted her time and energy completely to her artwork until her death in 1987.

Although her compositions are completely abstract, she considered them to be both personal and political statements. In her own words,

Everything I’ve done is a statement on the, as they say, human condition. ...

Throughout the 1970s and 1980s her work garnered critical acclaim, along with gallery and museum exhibitions in the United States, Europe and Japan. In 1995, her work was the subject of a one-person exhibition at the Solomon R. Guggenheim Museum in New York. In 2001 her work was the subject of a traveling exhibition curated by Ingrid Schaffner and organized by the Smithsonian Institution Traveling Exhibition Service. Her works can be found in the collections of The Museum of Modern Art, New York; the Solomon R. Guggenheim Museum, New York; the Los Angeles County Museum of Art, Los Angeles; The Art Institute of Chicago, Chicago; the San Francisco Museum of Modern Art, San Francisco; and Israel Museum, Jerusalem.