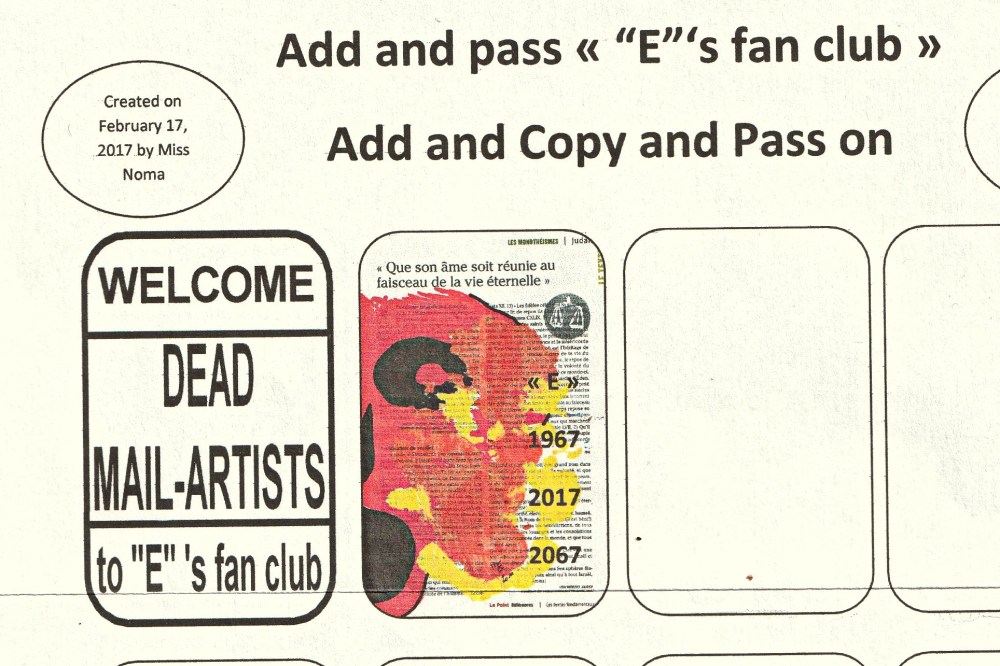 Mail art by Miss Noma for Monty Cantsin sent to my PO Box in Auburn, New York, USA. Point of origin seems to be France.

May 29, 2018 - I am receiving enough mail for Monty Cantsin that I think it’s time to start documenting and trying to solve the mystery.

In this particular case, I received an Add & Pass sheet from none other than Miss Noma concerning the E Fan Club. Most networkers are aware that the great E – Ambassador of Utopia (Guivry, France) passed away. A number of projects have been launched recently to recognize E.

I am assuming that – even if misguided – this Add & Pass is a sincere – even if fumbling – effort to honor E. He really was a close mail art friend of mine whom I admired very much. That is not a joke or posturing, if someone took it that way. Or thought I was trying to gain some unearned credibility by seeming to grieve over E who was one of the greats. It’s easy for a living person to claim great ties to a dead person because the dead person seldom denies it. But I insist that E and I were friends even though we never met.

Whoever set this in motion is clever. I’ll give them that. Monty Cantsin and Miss Noma are two of the better-known mail art shared (fake) identities in all history. Monty Cantsin (along with Karen Eliot and Luther Blissett a bit later) arose from Neoism in the seventies. (I am honored to be associated with Monty Cantsin in this mailing!)

Miss Noma is a more recent multiple user identity that had a big popularity surge a few years ago. I received mail for Miss Noma. That is because I think some artists suspected I initiated Miss Noma. I assure you that I don’t have now nor ever did have any connection to Miss Noma. To this day, I cannot identify any of the people who were involved in the Miss Noma “performance.”

The envelope is confusing enough that I don’t believe it offers any clues. This appears to have come from France.

I’ll have more information about this Miss Noma/Monty Cantsin outbreak. In the meantime, if you received this Add & Pass, I did not create it. That does not mean there is anything wrong with it, but this is not my project. You can decide what to do.