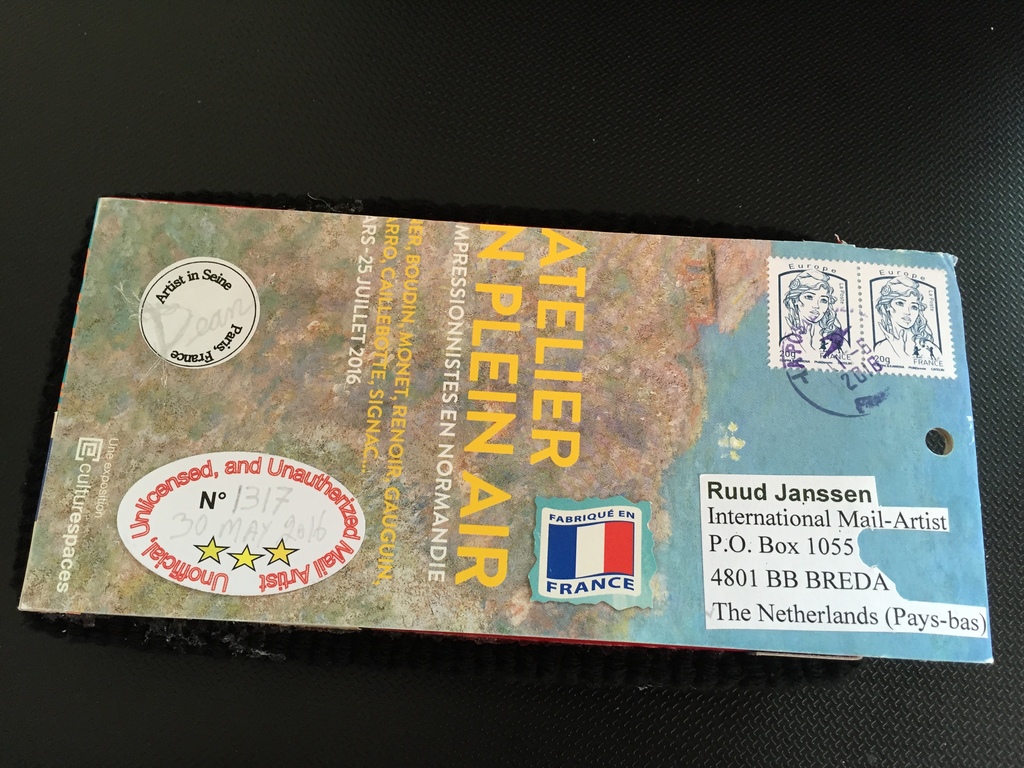 A lovely box from Dean Marks in Paris (France). 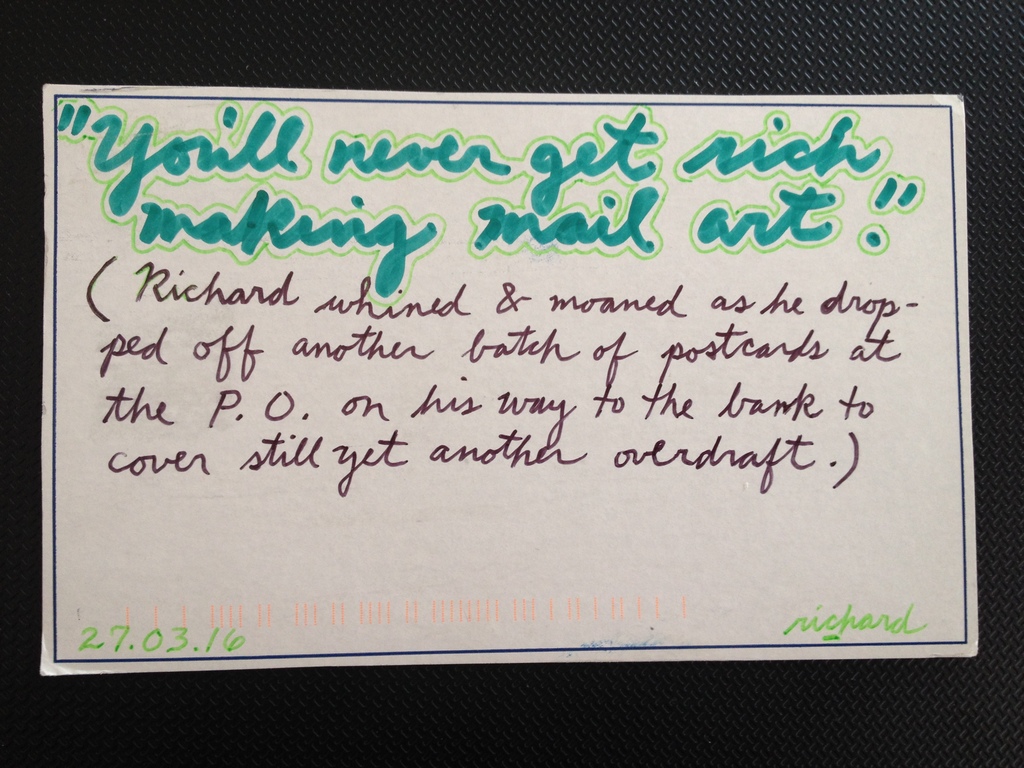 and the second card:… Sometimes I am busy with sending out Fluxus Words and these envelopes are all handpainted.

I do maintain where you can get an overview of the collection and an explenation of this specific Score which actually also produced the IUOMA. Have a look at:

Because the truth is that… 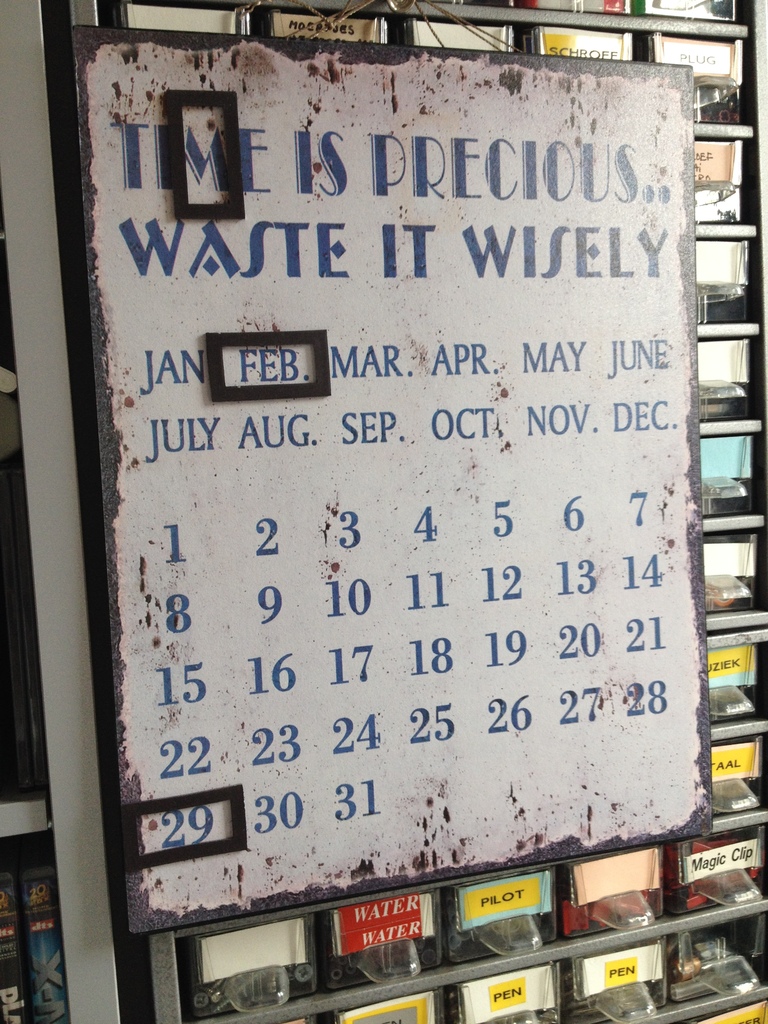 It only is possible every 4 years; sending out mail-art on February 29th.

So don't put mail in the mailbox today, but tomorrow. We will see if the postal system brings us tyraces of the special day.

I know some mail-artists will ask for hand cancelled mail at the postal office. I rather like to see what the automized system will… Beer boat with Eggs in a carton - from USA Walking home with a currious piece of Mail-Art that arrived at the P.O.Box in Breda. It seems to come from USA, but no senders name yet.....… 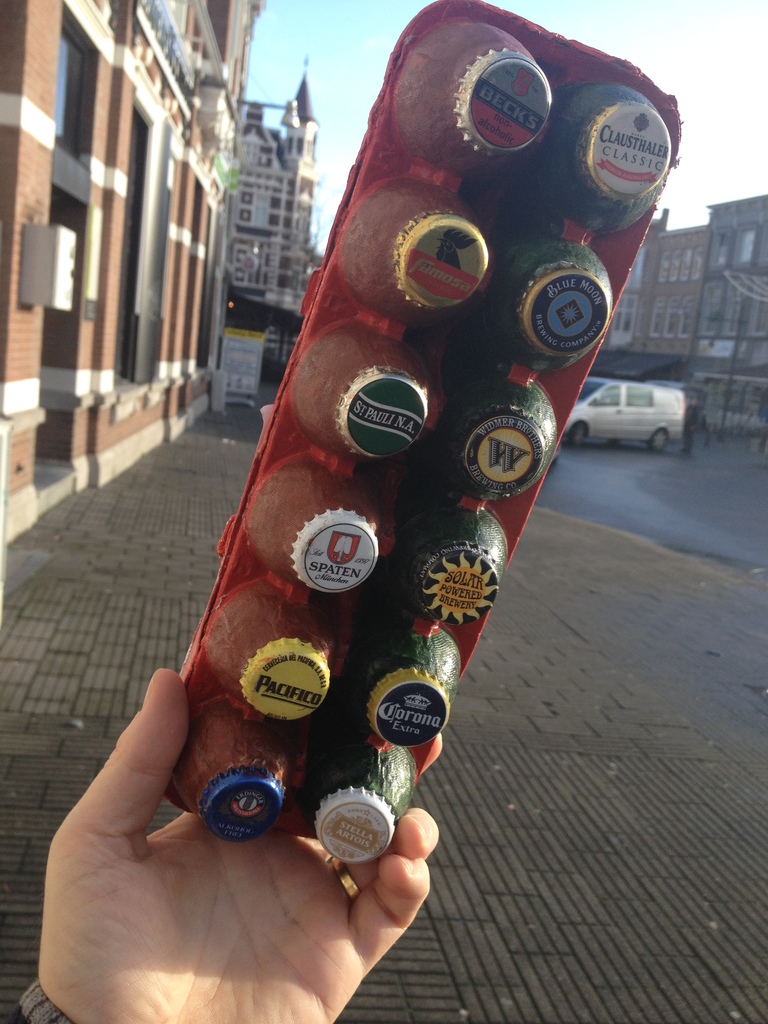 After being 2 weeks abroad I found with the incoming mail-art this box from Jack Latteman (Cascadia Artpost) in USA. Besides the formal USA postage sticker he also included on the backside lots of own postage that looked quite good:… 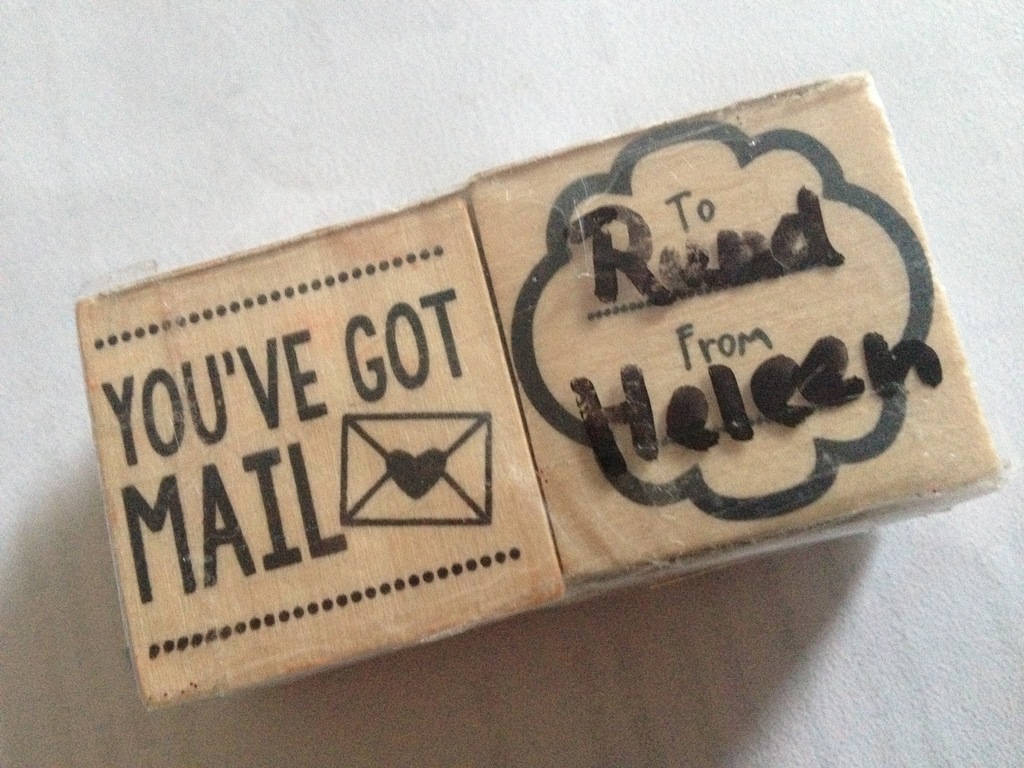 It took some time. 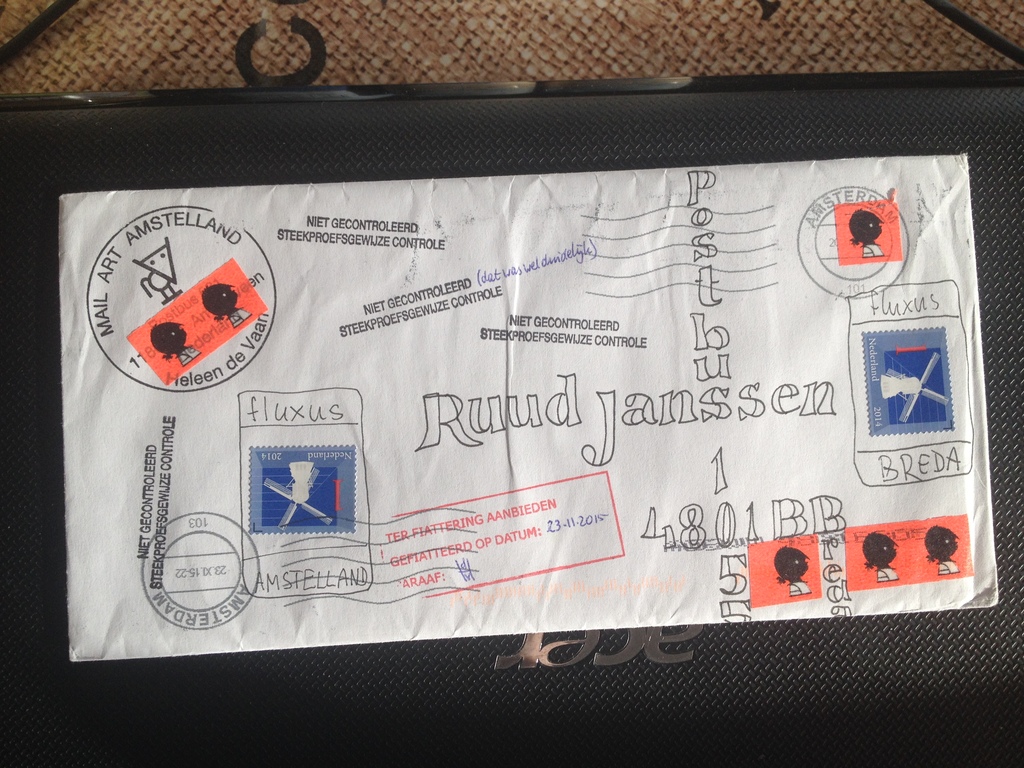 But eventually the enveloppe made in to Breda. It took TWO tries, but that brings the many traces. I see that one postage stamp hasn't been cancelled, so I probably will recycle the lovely envelope to give the postal office another go in adding something.....… just now I started writing down the connections between Pataphysics and IUOMA. It will take some time, but I am sorting things out. If you don't know what I am talking about, this basic slide about Pataphysics gives you a hint:… The essence of Mail-Art : Spend money on Postage

A new card from Richard C (Canard) in USA from 8-11-2015. It travelled fast across the ocean and now goes onloine and visits the world. Yes, Mail-Art has become a strage artform where communication can go fast in any direction in digital form while a piece of carton still takes its time, and can be photographed in the centre of Breda to…

This time the envelope shows another identity, and that is the name of Arthur Cravan Jr.

The statement is obvious Arthur Cravan is NOT a mail-artist , but a Post-Artist. And what to…

Last week an interesting parcel from Mike Dyar arrived with in it an object that deserves some attention.

The backside of the parcel receils some details already. A.M. Fine and Ray Johnson, and Mike himself looking for the next question. The mail-interview with Mike Dyar (see on this blog at:… 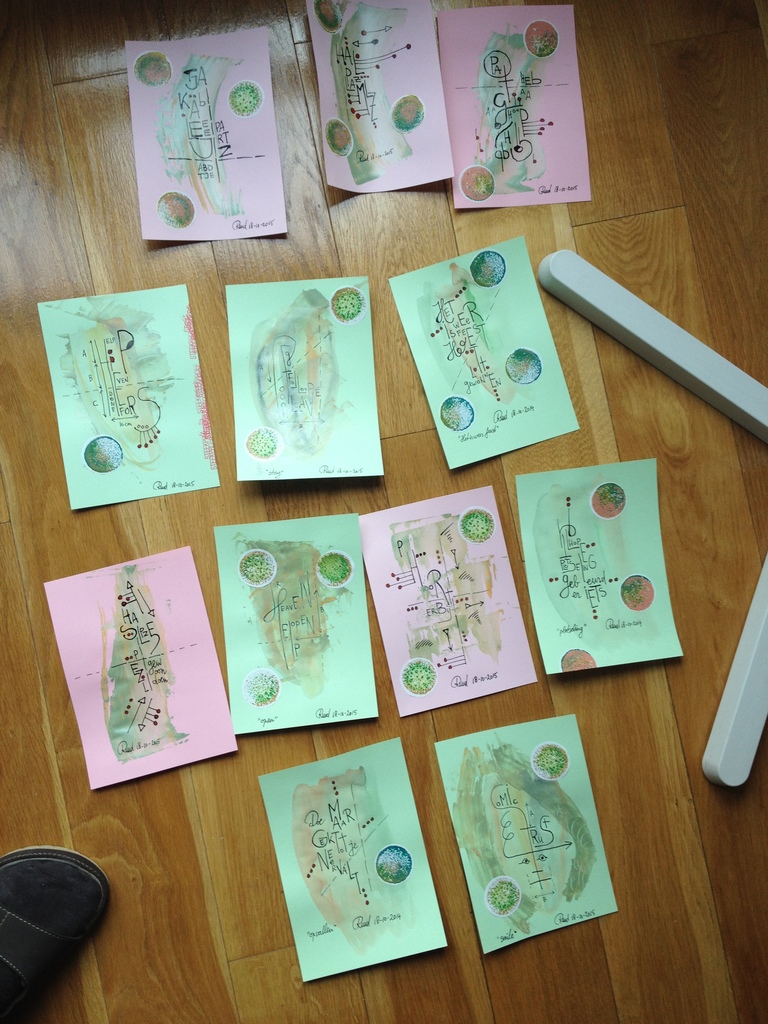 Not sure what I made today, but it is a mixture of several techniques that brought these works. Will send them into the network for further discoveries....... They are all dated 18-10-2015 and some have the drawings styles of the 'human digital' series in them, They also have the acrylic painted round stickers on them, and also layers of acrylic paint.  Well, it sure is multi… thanks for your mail! will give it a good use /place! 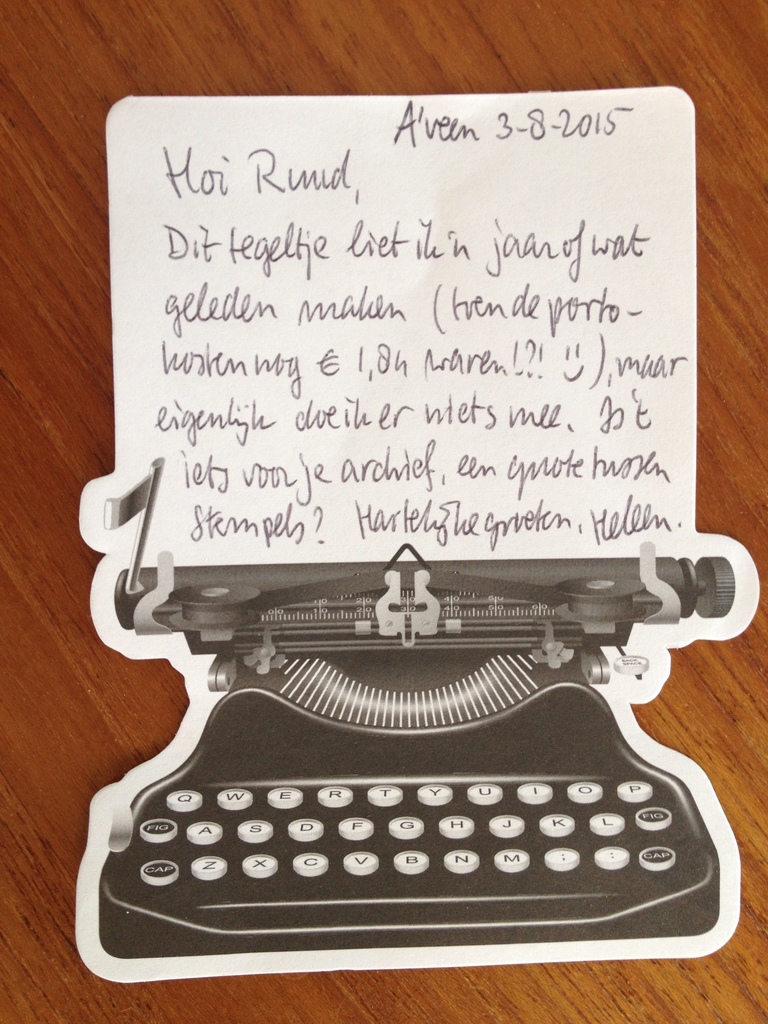