I had a very long, very crappy day of training yesterday.  By the time I got home I was simply "over it" but when I checked my mail my whole day changed. Nothing makes you feel more special than homemade birthday mail from friends around the world! My birthday is not until tuesday but I can already tell it will be a good one :)  Thank-you both so much, you two made my day!!! xoxo

This from Sarak in the UK.  Just realized it's not a good scan...3D doesn't do so well on my scanner, not…

Big thanks to Arttower, Carina Granlund and Claudia McGill

Arttower and his cutie pie robots, I especially like the peak around bot on the back.  Thanks for sending me one of these Arttower :) 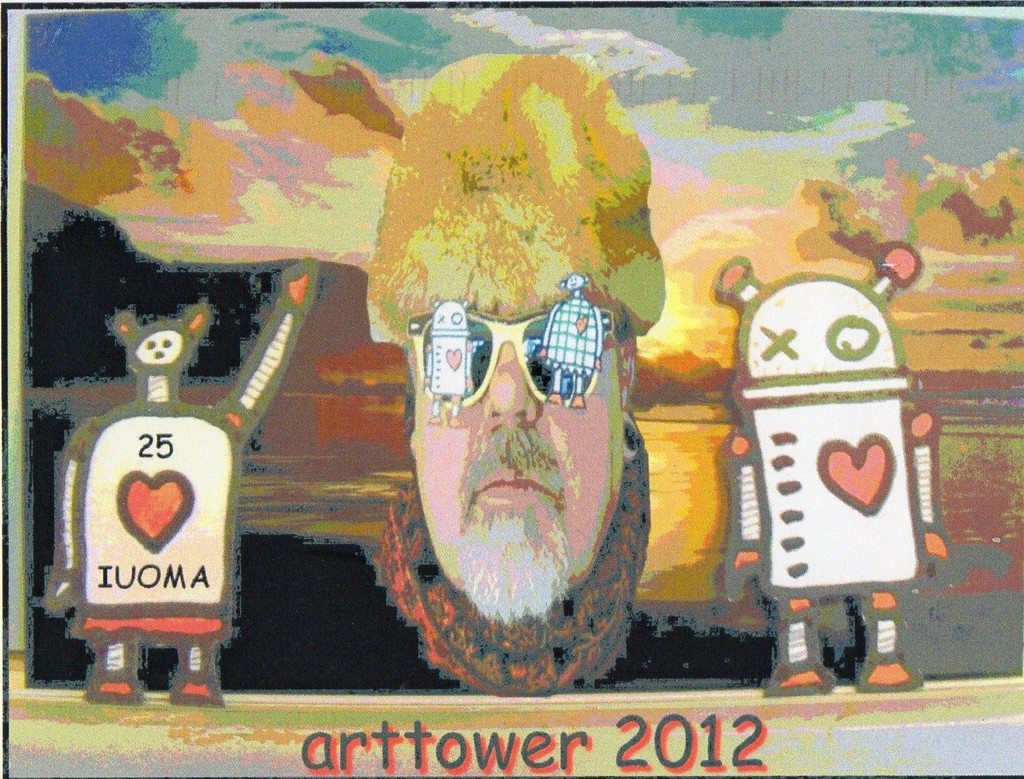 Carina sends a message saying "When things get complicated REMEMBER YOU are a mailartist!" I'll…

First, I got this wonderful envelope full of goodies from the Celestial Scribe From Katerina Nikoltsou I got an Andy Warhol collage...very nice! New WARHOL stamp included I see :)  Thanks Katerina!!! You've spoiled me lately, something will be heading your way very soon xo To start here is the back of Vizma's envelope declaring it a two-for-one with a warning.  She warns me not to fall for the really bad pick-up line inside, The Pick-Up Line  Silly Vizma...I would never fall for this line again, It doesn't take me 3 times to learn my lesson but it sure is nice to know you care ;)… After searching members for other mailartists in Alabama I found Stephanie Blake from Huntsville too. What a find! I just got my first piece from her, it's wonderful and unlike anything I've received to date.  I'm calling it a Fortune Pocket because peaking out of the flower on the back is my fortune which says "Sing and rejoice, fortune is smiling on you".… 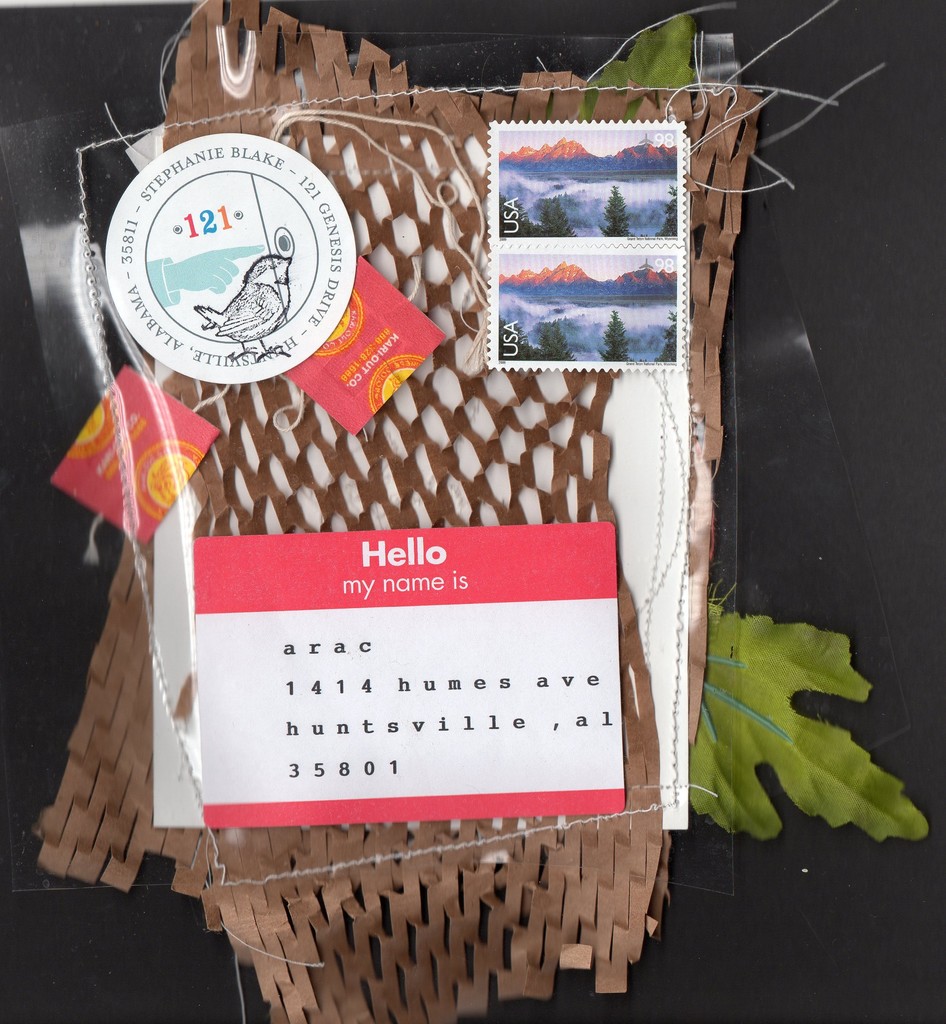 I got this great "Free Mail" because I upcycled the stamp back to her as it had not been stamped the first go around, now that I know what kind of prizes you get when you send Aussie stamps,  I'll be on the lookout for more! :)

My free mail came in this envelope with my 2x's stamp When I opened it I saw this arty bircage collage...real feather incuded. Very nice V!…

Wanna live virtually through my mailbox? It was a REEEEAAAAALLLLLYYYY good mailday!

Please share my visual pleasure but before I start the show let me take a second to give mad props and much thanks to all my wonderful mailart senders for these treasures, they are all uniquely wonderful!!!  A big THANK-YOU toTest Tower, Vizma Bruns, Stefano Fossiant, Patricio the C Scribe, Guido Vermeulen and last but certainly not least Claudia McGill...I will be smiling for the rest of the night I am sure :))))))))))))))))))) Thank-you all!!!!

First up Vizma my favorite Australian,…

Looks like it was meant to be returned to sender but I ended up finally getting it...lucky me!  What a wonderful mail day to see all that was inside.  A photographic tour so you can enjoy too!  I love that I got a piece of the whole, makes me feel so connected...thanks Cheryl  ;)…

I recently added an artcall http://hippiedippyartcall.blogspot.com/ and today the first pieces showed up...a big THANK-YOU to Roberto, Guido and Angie...check out what they sent. First up A Hippie Dippy Envelope from Guido~with prizes inside...YAY  Love the colors, even better in person and an extra thank you for the beautiful xenographic! I'll definitely be making some REBELLION mailart soon :)…

A surprise from DeVillo Sloan Got an unexpected mail surprise from New York this weekend...somehow I was lucky enough to have been chosen and entrusted with a shred of the Elgin Shroud (maybe with miraculous powers),  a Barbie valentines and a bit titled "cerealism"  that made me laugh.Thanks DeVillo, got some Lucky mail going out to you tomorrow with a promise not to carve RK, DK, OK or…

Mailart from RCBz and my first arty slides Angie and Snooky :) Quite a while ago I sent RCBz a card thinking it would get there in plenty of time for the intended occasion.  Weeks later we had both concluded that it was simply lost, surprisingly it finally arrived.  Looks like RCBz's most recent postcard to me is announcing it's arrival.  The actual card I sent is set atop the turtle on the B side…

A personalized stamp of me by Bear

So I made a deal with Bear trading mail-a-day-for-a-week for an original stamp carved and designed by him to be some kind of representation of me...he couldn't have done any better! My family is hysterical because I am notorious for never posting pictures of myself and always trying to stay out of photographs...in a million years I would have never had a stamp made in my likeness but I LOVE it and will proudly stamp it onto things I mail out into the world.  An amazing likeness I might add…

This is my first twofer...thanks guys! 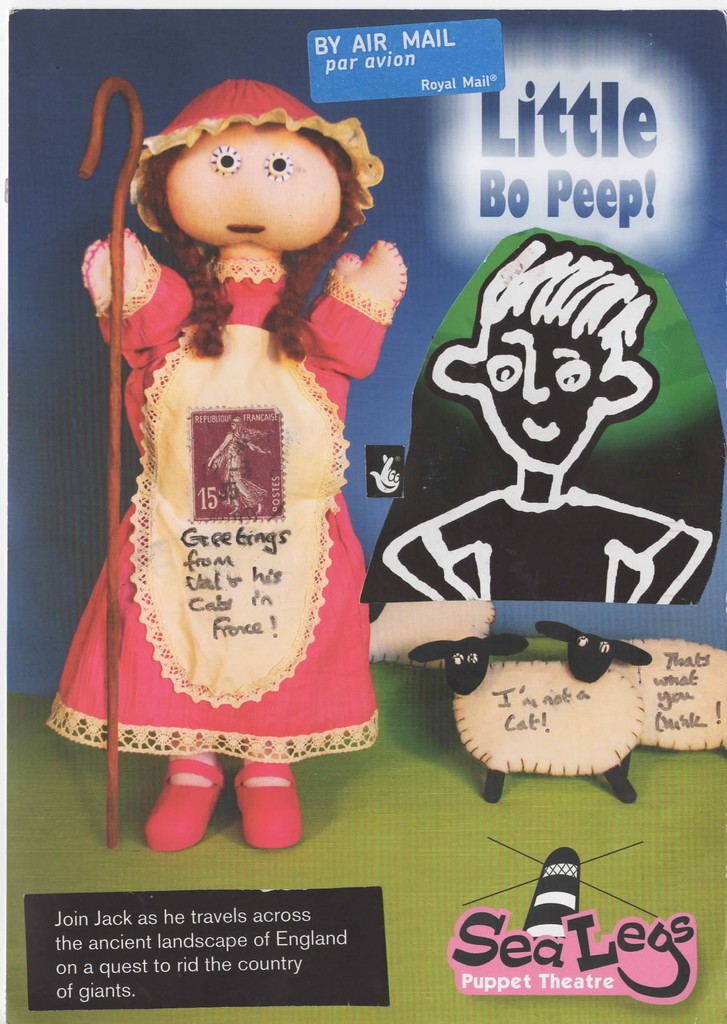 As some of you have already heard my friend Trav, the Travelocity Gnome has been having a rough go of it since Sleepy, the new Travelodge Sleepy Bear hit the scene.  He's no longer getting the 1st class destinations, the finest hotels or having the best vacations.  He went to visit Carla in CA for a bit of much needed R&R.  While he rested, she contacted his agent and tried to straighten things out.  His next leg went no better so he took a much needed Puerto Rican vacation with my…

Today I recieved a delightful envelope filled with colorful puzzle pieces from Bear.  Upon completion I got an awesome painting of a Minor Threat album cover...very cool delivery Bear! Thanks so much...I;m thinking I'll need to spray mount it on a board so I don't lose any of the pieces. :)… Time and tide wait for no man; dirty dishes do~ RCBz 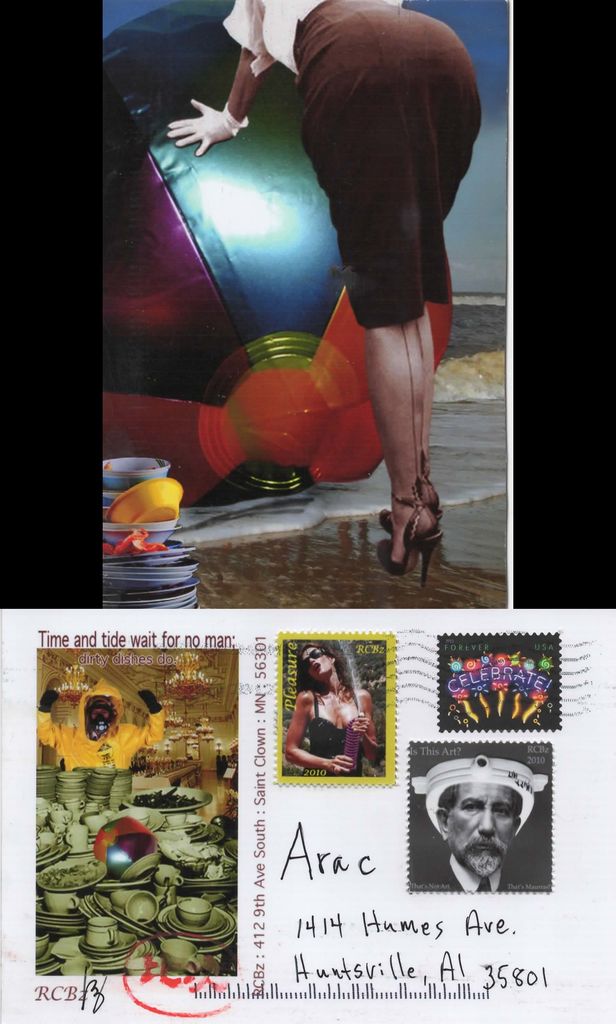