I always think of Z at the back. The end of the alphabet. The lonely letter with the fewest words. I think Ruud has managed to change this with his Fluxus words. If we made a purely Fluxus Ruud Dictionary – I think Z is coming up top? ZALOP now has a series of variations:

ZALOP - the original Fluxus word given by Ruud meaning - ABSOLUTELY NO WAY DEFINITELY NOT NADA NIX.

ZALOPU -  A particular tone of ZALOP - the tone of NO WAYS!!!

ZALIP - This word comes with a…

If you've got time and money (just a few cents - sense? ) be sure to attend David Staffords School for the Natural Lowering of Self Esteem. IF he does not succeed with your self esteem, I am certain he can achieve lowering your hair.  Especially hers. Although, the bouffant - is it coming back? IF that School does not appeal to you, attend the Daycare for Your inner…

Conceptually its quite difficult to portray the words we cant say – without being obvious.  Once again though,  Marie has succeeded in subtly expressing an idea. This time, her concept is The Words Encaged.  Those words we want to express, but never do. 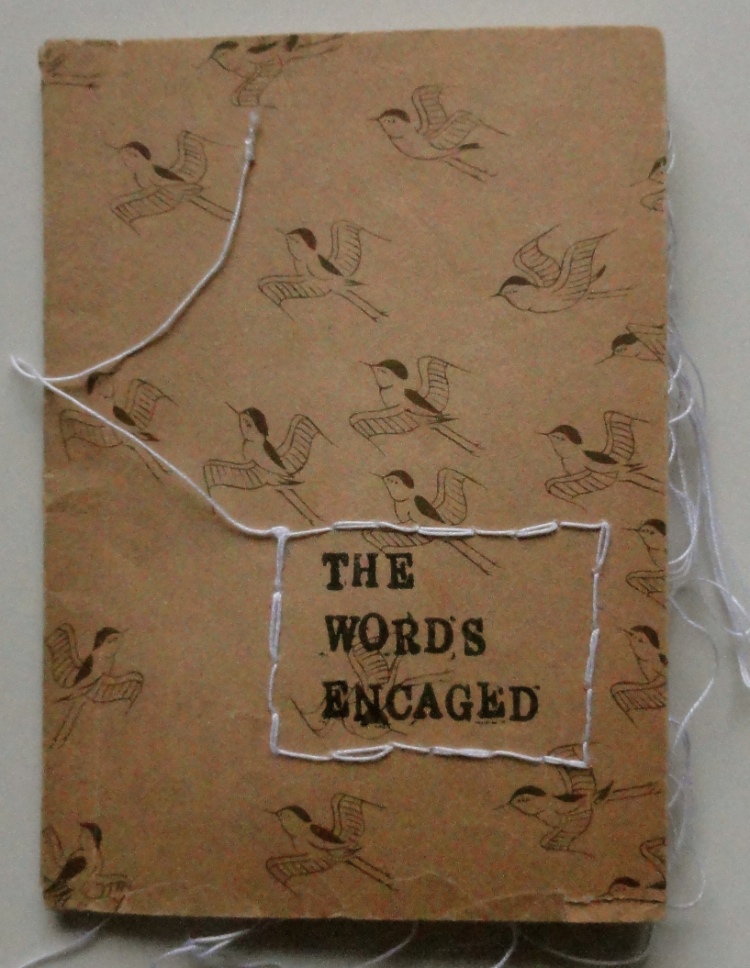 The things left unsaid. Circumstances that don’t allow the verbal expression of what we would dearly love to… Continue

John sends me - and others - the most wonderful things :-).  I have NO idea why, but they just YELL at me to add to them - I'm sure some of you feel that?  John is also a well known ZALOPIST.  ZALOPISTS inhabit ZALOP City in the World of Emphatics. 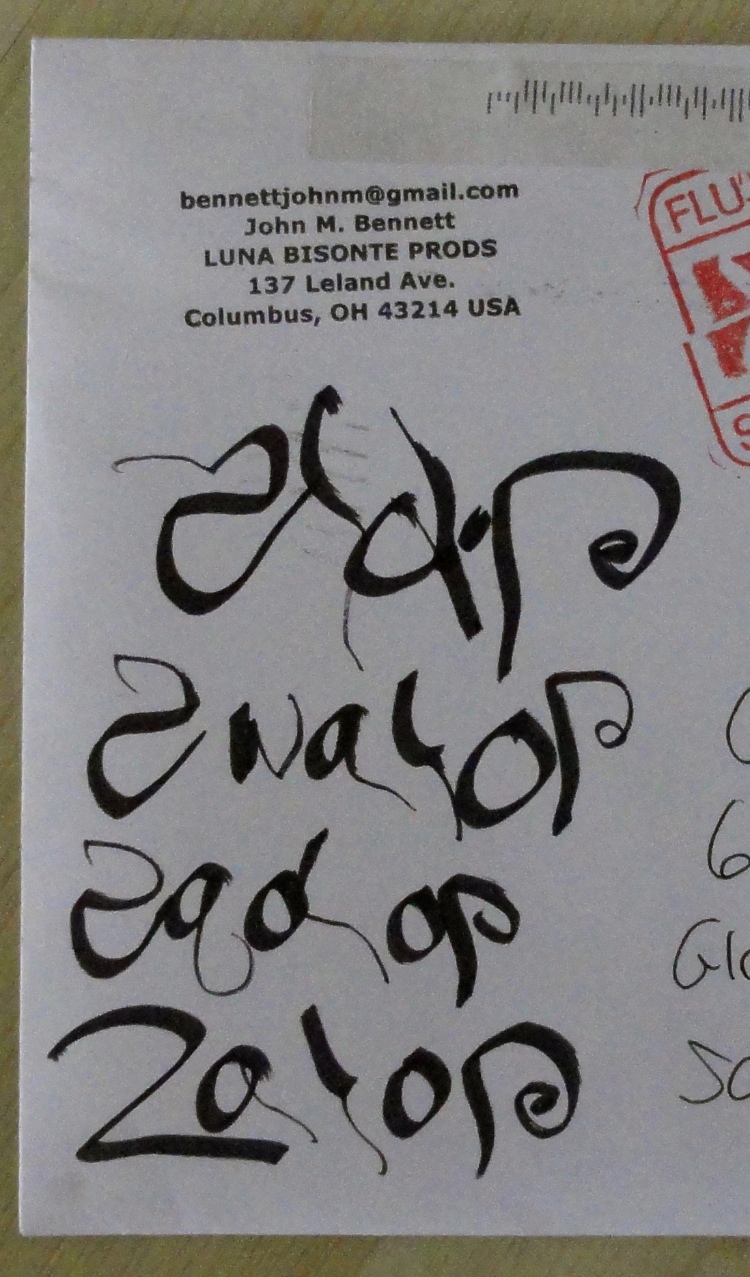 ZALOPISTS make maps to secret doors leading to ZALOP City.  Its very difficult to find you  see.  This is NOT a FAKE map -…

The World is a Town - GOTIJ (why not!) Thom (USA) , ROB (Australia), Guido Vermeulen (Belgium) and Bernd (Belgium)

I think Thom is a Keeper of Words. He guards the gate to their destruction.  Most of you who know Thom know that he is a Lexical logophile.  At the pen of Thom these separate units become flowing sentences that build to a river of beauty. The World is a Town is no different. …

As most IUOMA members know, Ruud Janssen has had an ongoing Score of Fluxus Words since September 1988 – that’s 23 years  ago!!! In celebration of September 1988 – a new word arrived for me to promote as a new word, determine its meaning and then to disseminate  WORLD WIDE! I need your help here – JOIN THE NEW GROUP!!! Its GOTIJ – MAN – and we’ve ALL GOTIJ – thanks to Ruud.

ZALOP – it’s a performance right? Whoever says NO in a deadpan voice, devoid of tone or apposite energy - quiet and sadly whispered or in a loud exclamation?  However it is said,  NO  is a complex word for sure.  ZALOP - the Fluxus word as original score was sent by Ruud on 15th December 2010.  I determined ZALOP to mean  "ABSOLUTELY NO WAY DEFINITELY NOT NADA NIX.  It is essential this word is said in an emphatic tone. Accents do not matter…

Memories are Made of This from Marie Wintzer

When I first ‘met’ Marie (having never ‘met’ in body does not mean one cannot make excellent friends!) and I asked her what she did – in real life – yes, if I was a cat I’d be dead – bearing in mind what curiosity does to those creatures, she said she worked with brain cells. FAB!!! I said, make me something!!! Not initially keen on the idea, its taken a year – BUT the brain cell inspired book FINALLY arrived. Some things are just WORTH the wait. This was no exception. …

Hula Hoops from David Stafford - I KNOW I've posted this already - but just in CASE you didn't see and then have not taken up the essential sport of hoolering.  The woman who looks in the mirror. I'm HOPING she doesn't suffer from Extreme Dorian Gray Syndrome,  - I asked David to let me in on the secret... Because  we've also been seeing from this masterful story teller  Japanese cocpopthings and cat fondues, …

PLUX - from The Striking Haptic Werewolf

Narratives. They carry their own beauty and sing  their own meaning. And each artist has their own rhythm.

Lesley Magwood Fraser tells the tale of Cailleach, the stranger that hides within.   She’s that girl that was, now she is the wise crone wearing a suit of wrinkled skin. Her joy? To ride in winter on the backs of creatures - the blue faced daughter…

A FAB weave piece from Thom, WITH a wonderful letter – which opens with – This is for you simply because of the wonder-full-ness- icity of you! OK – who is NOT going to fall for a letter like that? Thom mentions my confusion at the goings on in Forks – you know the vampires and all, so he also enclosed a pamphlet on Forks – where “you can find it… see it… do it all in FORKS – really???? That must be where all the heart robbers…

The World is a Town from Ambassador "E"

After WEEKS of ZALOP mail from Ambassador E, the World is a Town finally arrived. No Insomnia in this bright place! A beautiful accordion book made of the thickest  card. The cover of the book is also the envelope - dual purpose - something like a town INSIDE the world? The people in "E"'s world race and dance in bright colors, skipping along yellow brick roads.  I want…

From Katerina Nicoltsou and Georgia Grigoriadou

I KNOW these two are enjoying sun and sand - aside from telling us so - their work LOOKS like it!  This is one lady on IUOMA that I KNOW heart matters to.  MomKat is supportive of everyone, sends out work like a MACHINE and collaboratives with a giving spirit ALL THE TIME!! The heart is an asemic matter too for sure - we unconsciously write on it and into it ALL  the time. A tablet of living flesh. Thats what this looks like.…

I have had to wait so long for this.  If ever, in a hundred years, THEY dig in my cupboards, THEY will know that this is a genuine artifact.  Its asemic, poetic and authentic. Its Karen of course. Wrapping cardboard daggers in red thread, pasting  onto paper slabs. And the back says, Happy Birthday.

I wonder if the Ether is like Camelot? I dont know, in the half light I thought I heard Lord Tennyson. The faintest of echoes in a winter sky.

"There she weaves by night and day

A magic web with colours -grey-

She has heard a whisper say,

A curse is on her if she stay

To look down to Camelot" 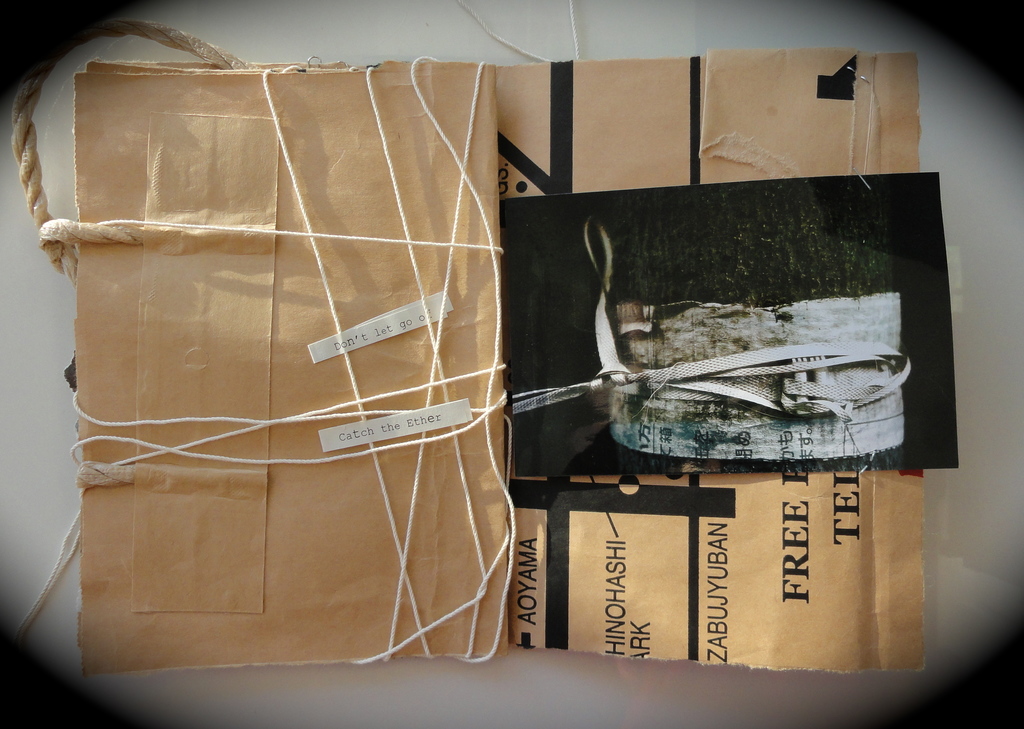 We had been in despair Marie and I about lost Mail Art.  I know its part of the process, but ALL THAT WORK – just lost in the Ether – it doesn’t seem fair somehow.  But yesterday was different. Yesterday was My Triple Turn. From Nancy Bell Scott - Hint - The Other Side

I KNOW altered books - they're my 'thing' - Nancy could not have chosen a better medium to send me.  It is interesting that she imposed collages and asemic writing on pages of pre-written text, torn from their original moorings  - I mean -  this page is already written. It HAD meaning. It was an insular world, a concluded entity. 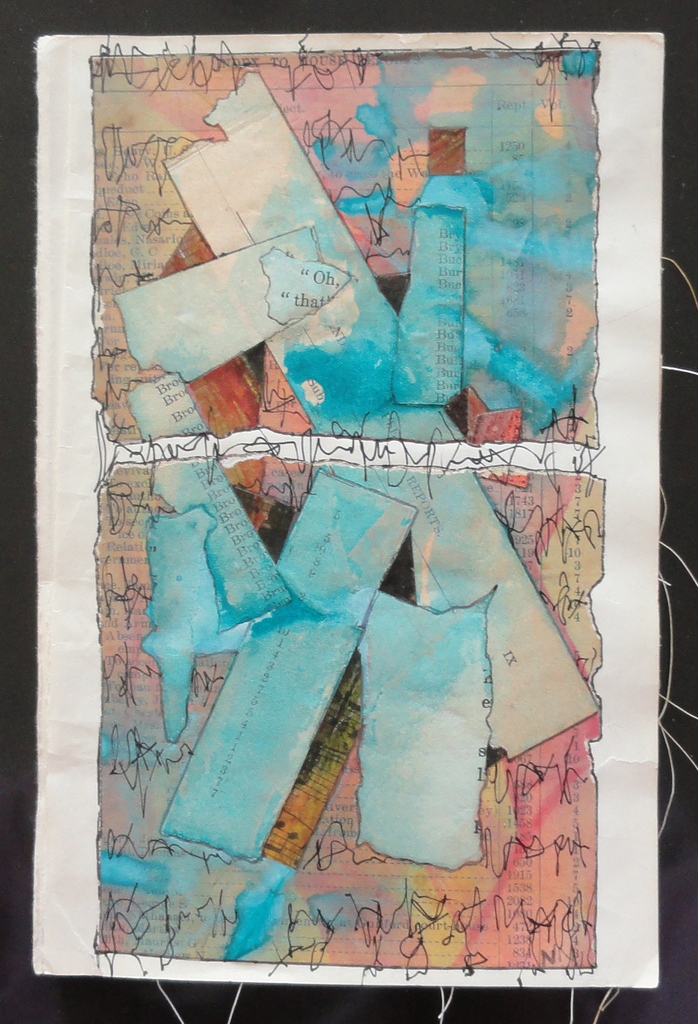 And Nancy changed its meaning, its…

There's all sorts of jargon that that only those in the know know - right?

Ficus Burkei Miq, Natalensis Hechst. Lycium Persum. The good news - they all grow in Selinda and Umtali and Chirinda. Hope that helps????

Seriously - Les has created her own…