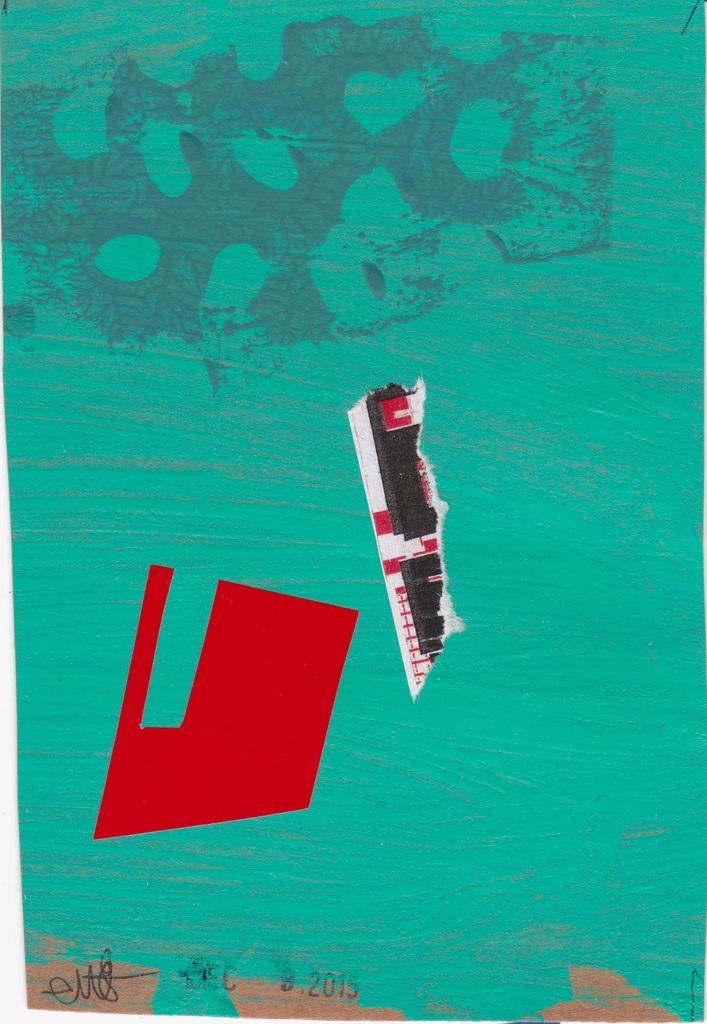 I received some wonderful pieces from Matthew Stolte this month, including the above mixed media piece. Mixing some kind of prints/stamps in with my vispo has been one of my goals; so far they've been mostly separate. This has given me some ideas.

I also received the piece below:…

Season's Greetings to y'all. OK, so now you might be asking why 'Sex Bomb Sabotage'? Well look closely in the top left hand corner and you will find this:…

Great black and white envelope from Eva, sent this summer. Clever green highlights on the address to match the stamp. 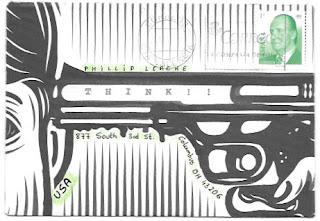 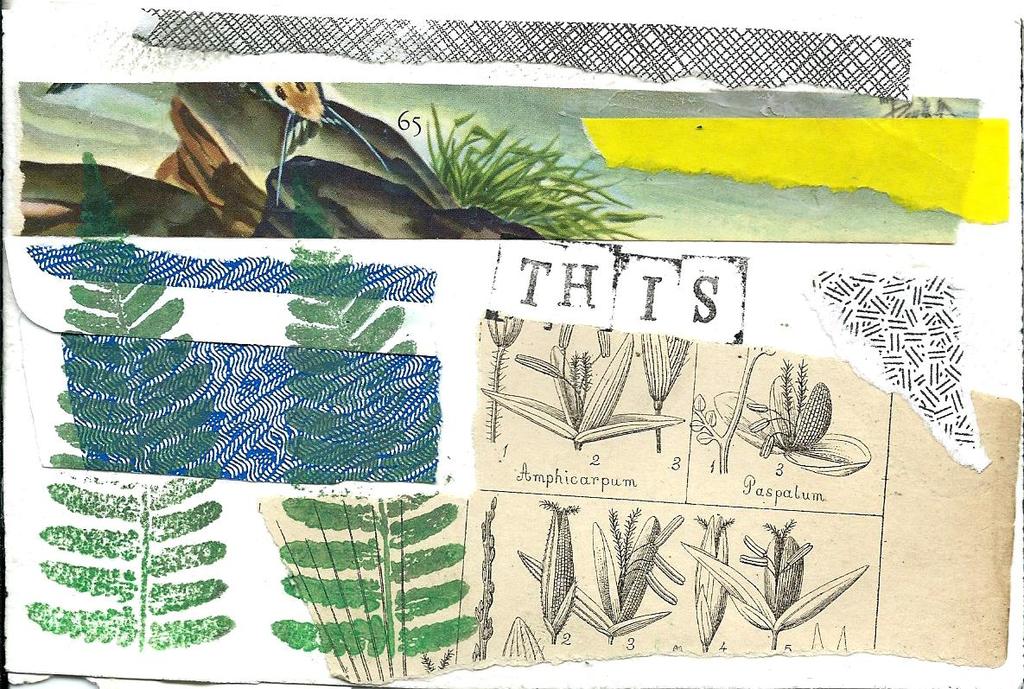 thank you Rachel...so nice to hear from you...have the Best New Year...

Received from De Villo Sloan are these two 8.5 x 11 inch propaganda "flyers" that depict the queen of trashpo and some appropriated DKULT signage, or maybe, just maybe, they are signifiers? 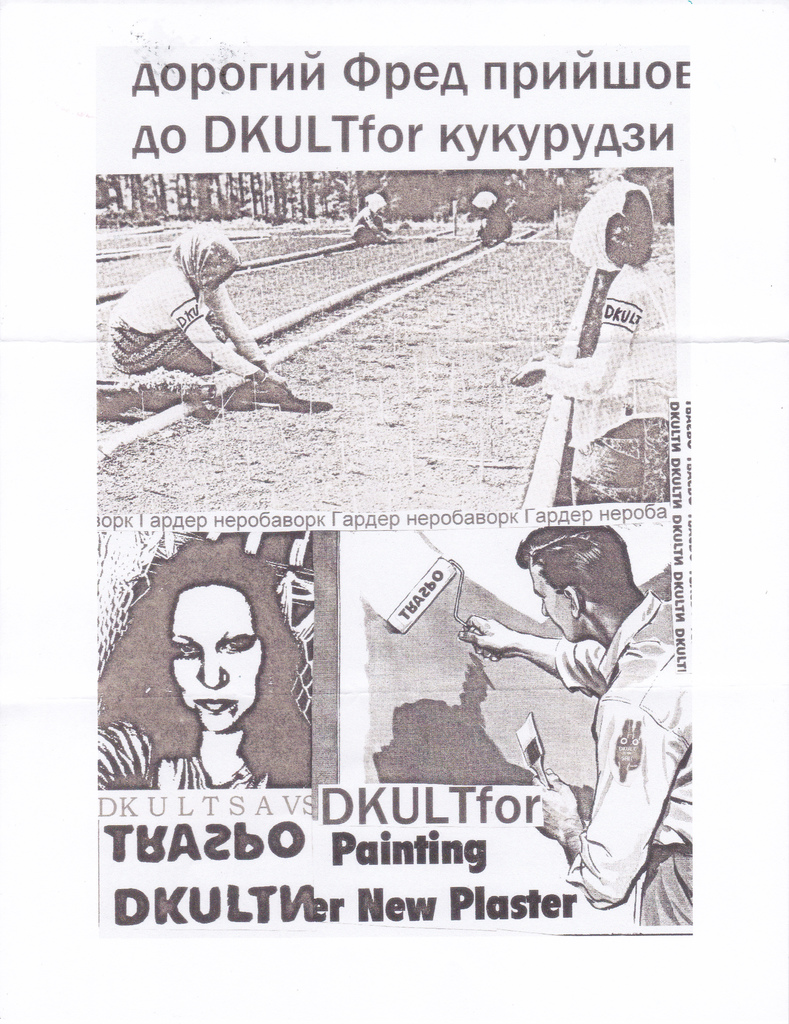 This one I will title, 'New Plaster'.  And the next one:… 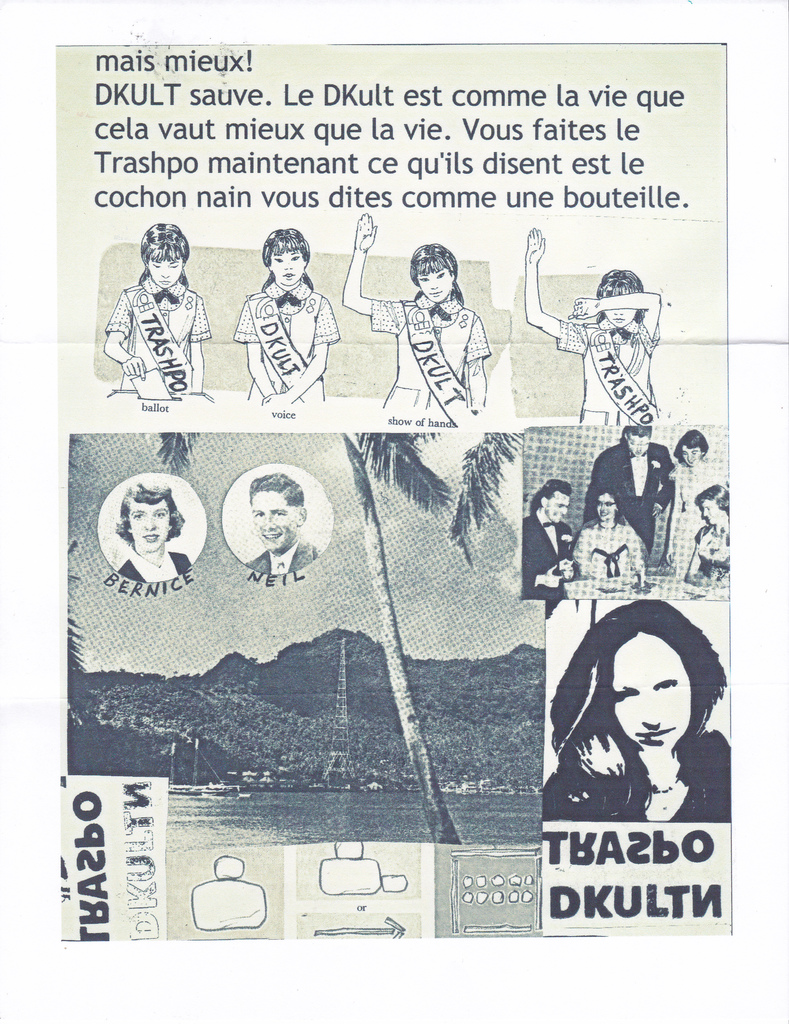 December 24, 2015 - Without further delay, I am thrilled to document two pieces by Stan Askew. These are large (approximately 3.5 X 6…

A cool collage on another piece of Emily's hand made paper...Thank you very much Em... a wonderful collage piece from Justin...love the comp and colors all on a library index card... 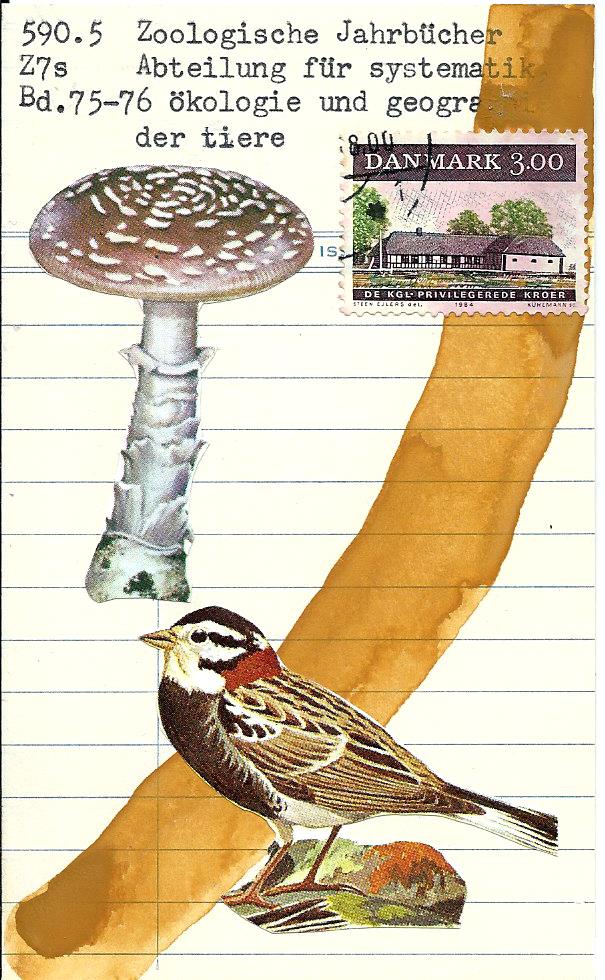 thank you Justin...have a wonderful Christmas and New Year *!*

Christmas mail art from Momkat. And a beautiful origami bird on the stamp. 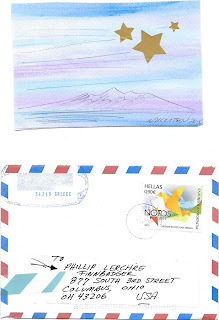 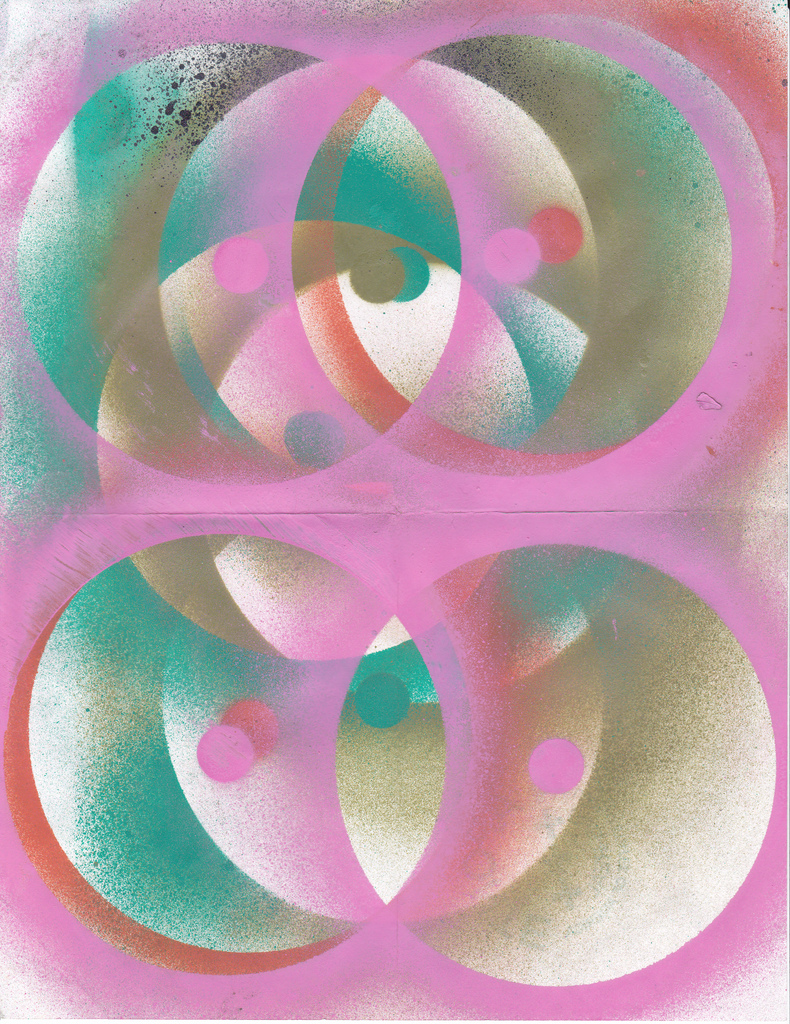 Other flotsam and ephemera included:… 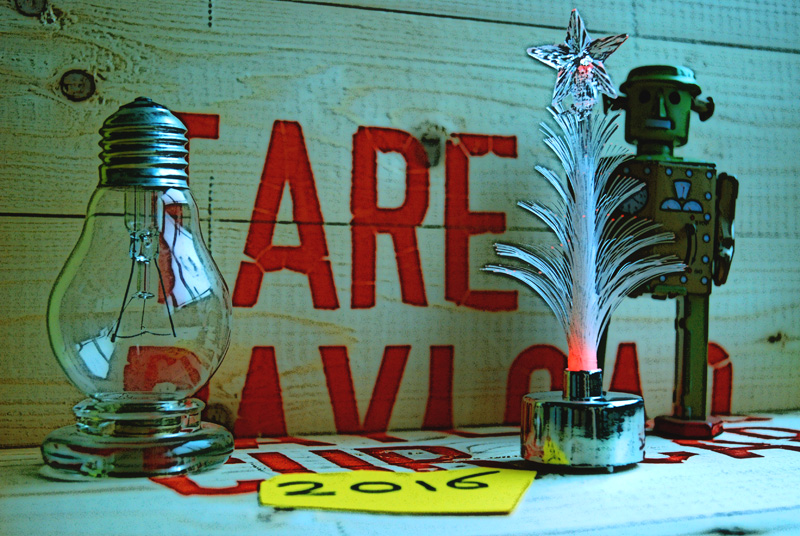 the box art came in with this envelope.
I also like the design of the snake skin like design paper.… 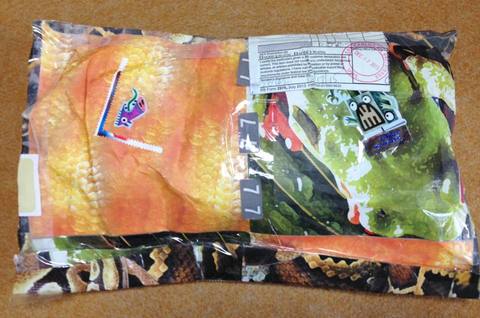 Earlier in the year I had admired a stamp Heleen showed on her blog for the Sunday Stamps theme of wild animals.

Imagine my surprise when she sent me mail art using that same stamp - it is a picture of the Konik pony which has been re-introduced into a natural habitat in the Netherlands.

And accompanied by a pony drawn by… awesome piece Ronni...love how you did the background! Dean aka Artist in Seine:… a wonderful envie full of surprises from Linda... 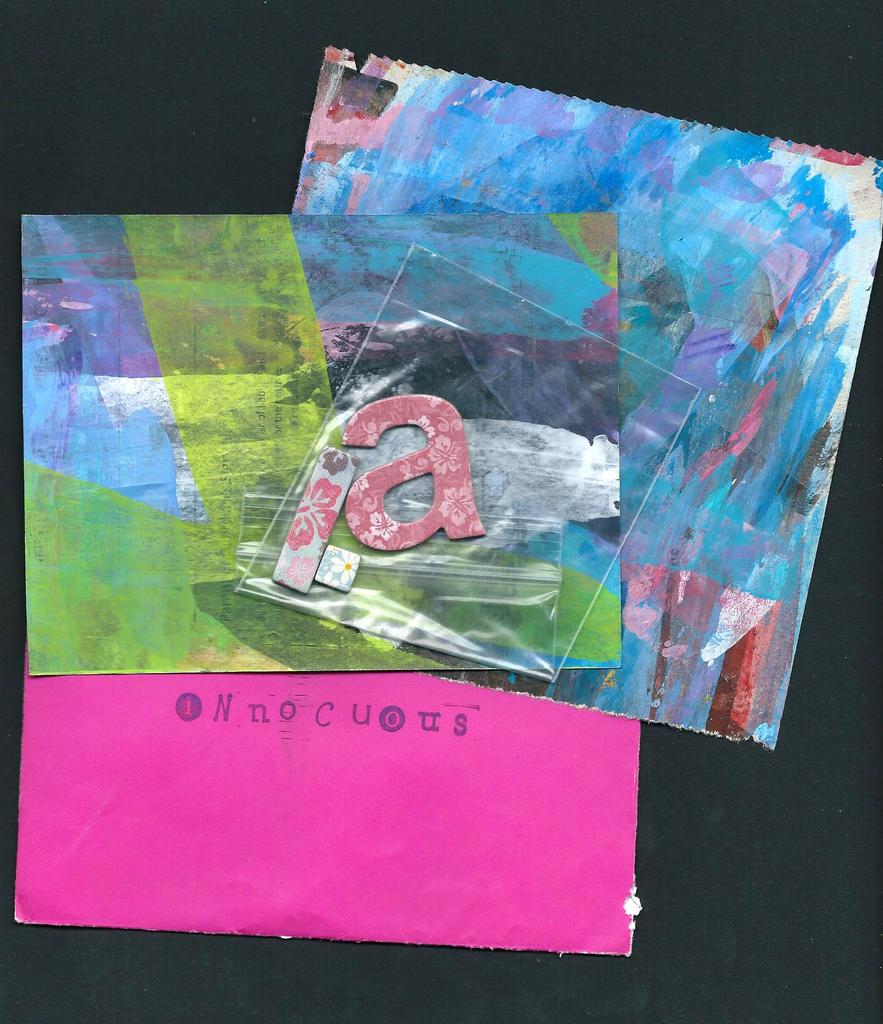 scraps for collage...love the music sheet!…

From the Artist In Seine (who ran the NY marathon in a banana suit!!) here is his latest collage. 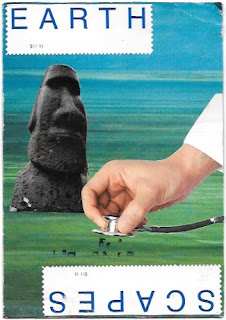 Wishing all of my friends a Happy New Year! Thanks to all of you who sent Christmas cards, I really enjoy getting them! I will try to get online and scan in the work that you've been sending soon after the Christmas holidays. Take care, enjoy one another's company and spread the peace! -- Warm regards, liketelevisionsnow