rubber riddle wrapped in mystery inside an enigma...

received this with no name, explanation, return address or postmark to help me deduce... Another Set of Stampf 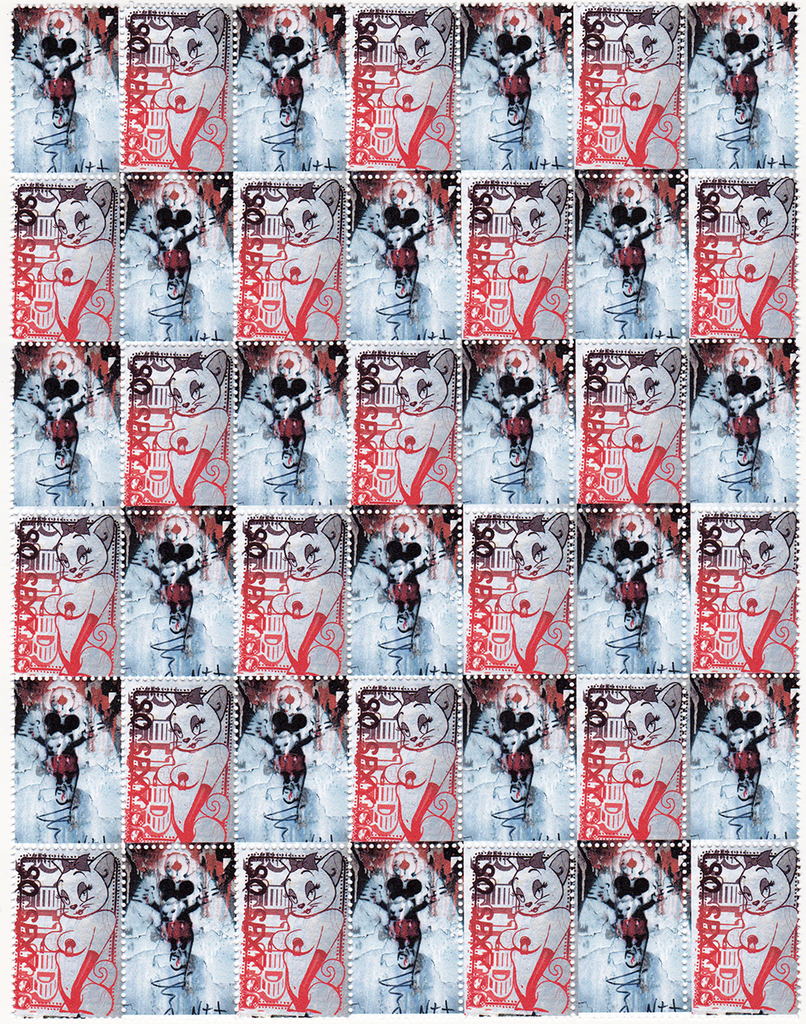 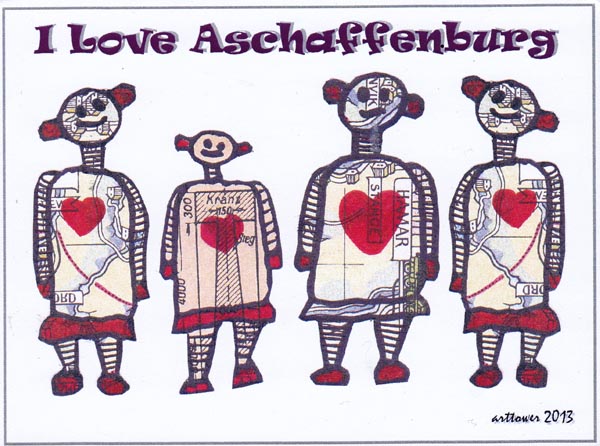 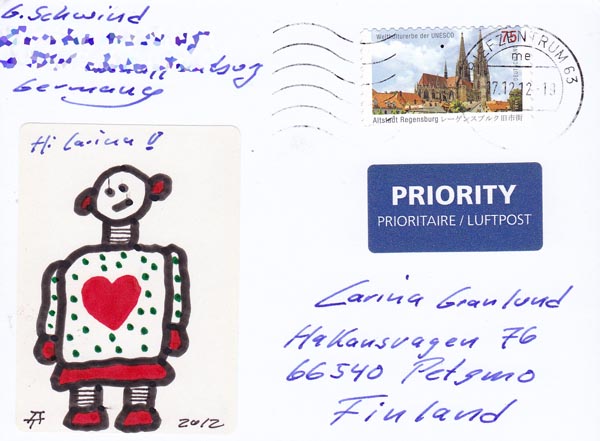 Thank you arttower and Happy…

Back in October, I started a group here at IUOMA called THE EPISTOLARIUM.  I said that my goal was to create a small free PDF journal for people to read that would be posted at my blog, "The Letter Project."  The journal, also called THE EPISTOLARIUM will be a themed journal.  The first theme was, appropriately, "the epistolarium."  I asked people to answer the question, "What is the epistolarium to you?"

I received a variety…

Snookie sneaked into my mail box!

Thanks Angie! I just love all the foreign languages.

I am glad you are breathing!… 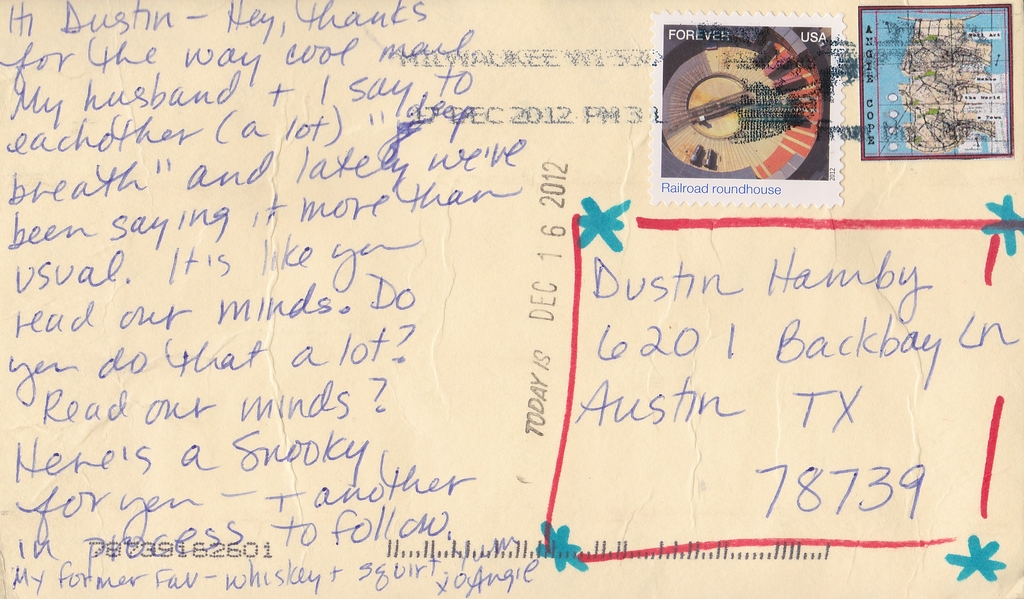 I received my first piece of Drunkpo! Thanks Cayte!!… 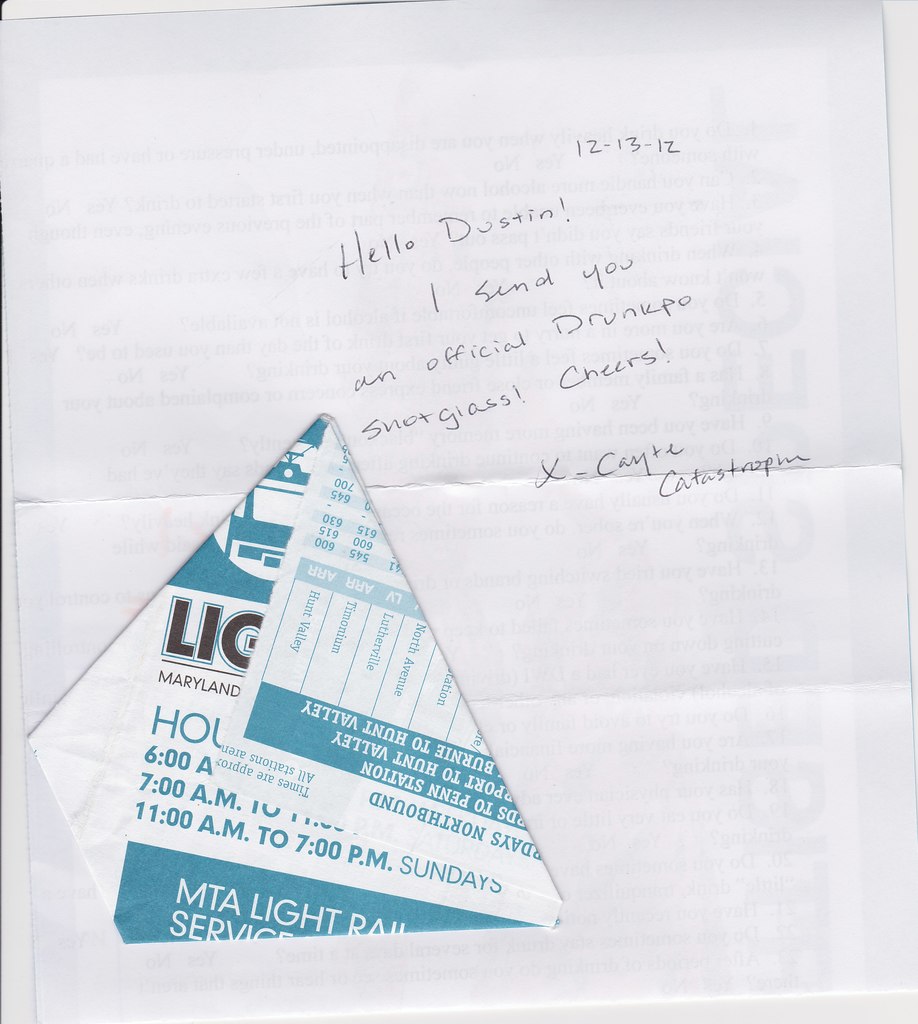 I received this beautiful hand-made book from Stephanie Blake. She incorporated found scraps of paper, photos, stitching, and even burnt the edges. What a delight! Jeanne takes us back to the first in-home movie projector....love this time travel...thank you Jeanne *!* Thom sent this funny team - had to laugh about it. Inside I found important infomation concerning the relationship between work and play! Thanks a lot, Thom, very useful!!… 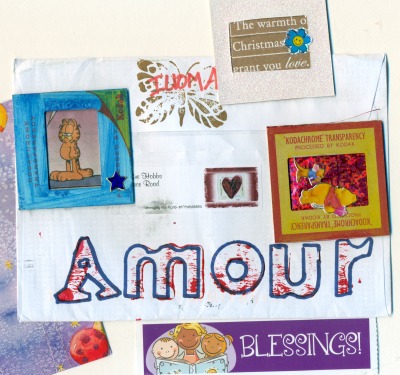 Wonderful card from Karen, thanks a lot!! The world will not end tomorrow

because we need to celebrate all the New Year 2013

thank you very much,… One of the funniest looking gift labels I've ever seen.  Thanks Svenja!  Merry Christmas to you!

Love is Blind from The Blessed Father

It's always a joy receiving mail from BF!!! Thanks for this. I'll have to start framing some of your stuff.… 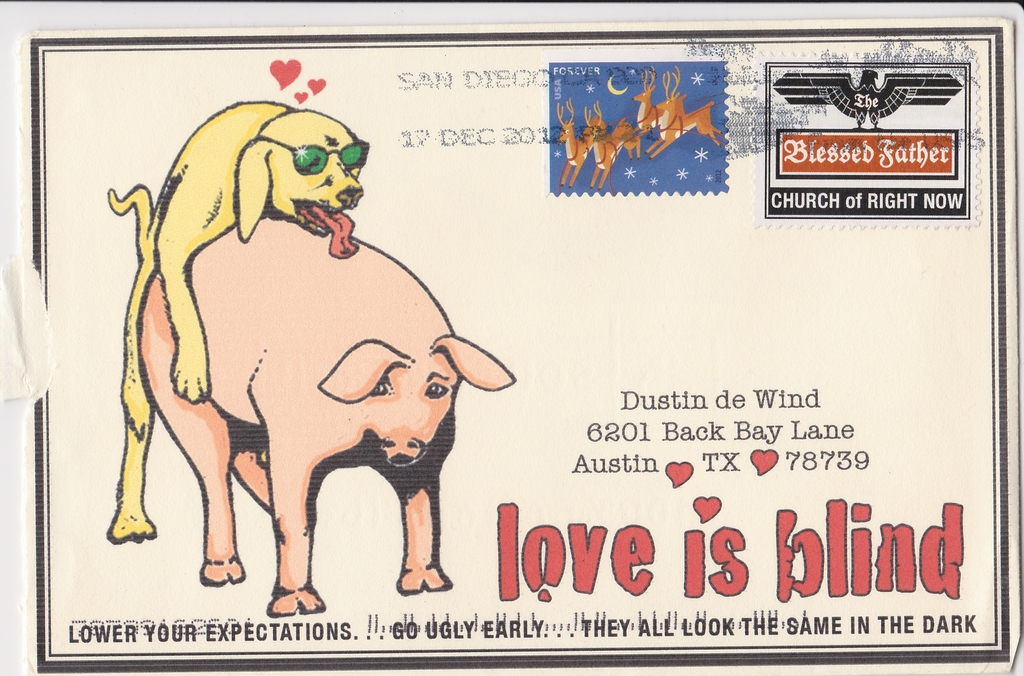 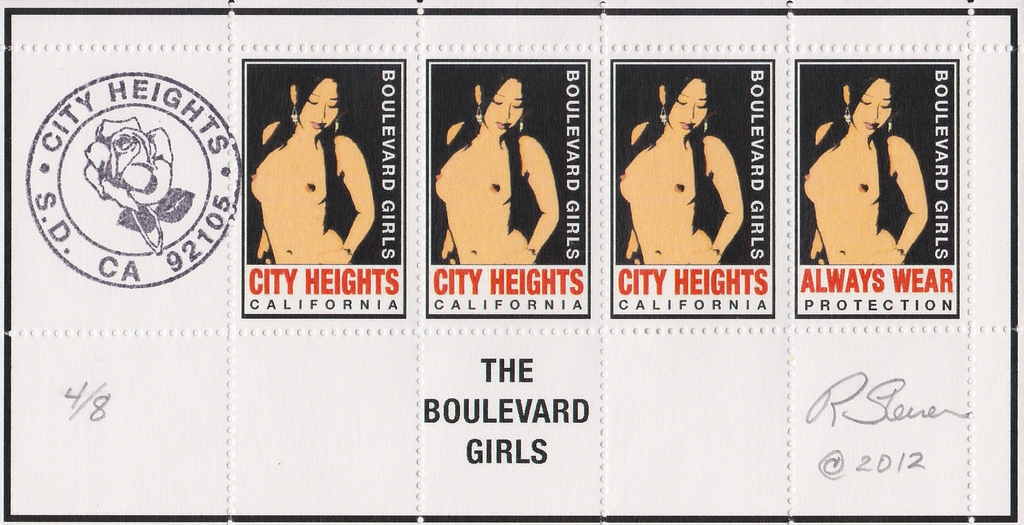 Minimal pinks from Kat and Cristina 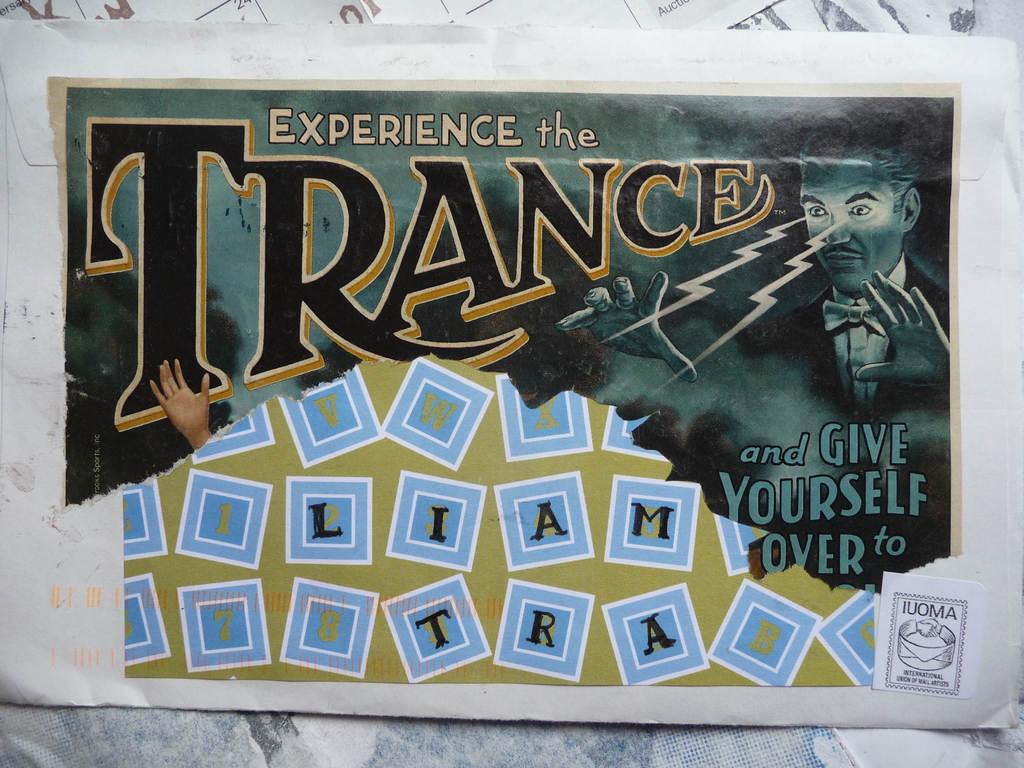 Got a few fat mails lately, this one from Thom Courcelle (aka Liam Tra)! Amazing envo: Experience the Trance and give yourself over to IUOMA!!…

the first NO EL! 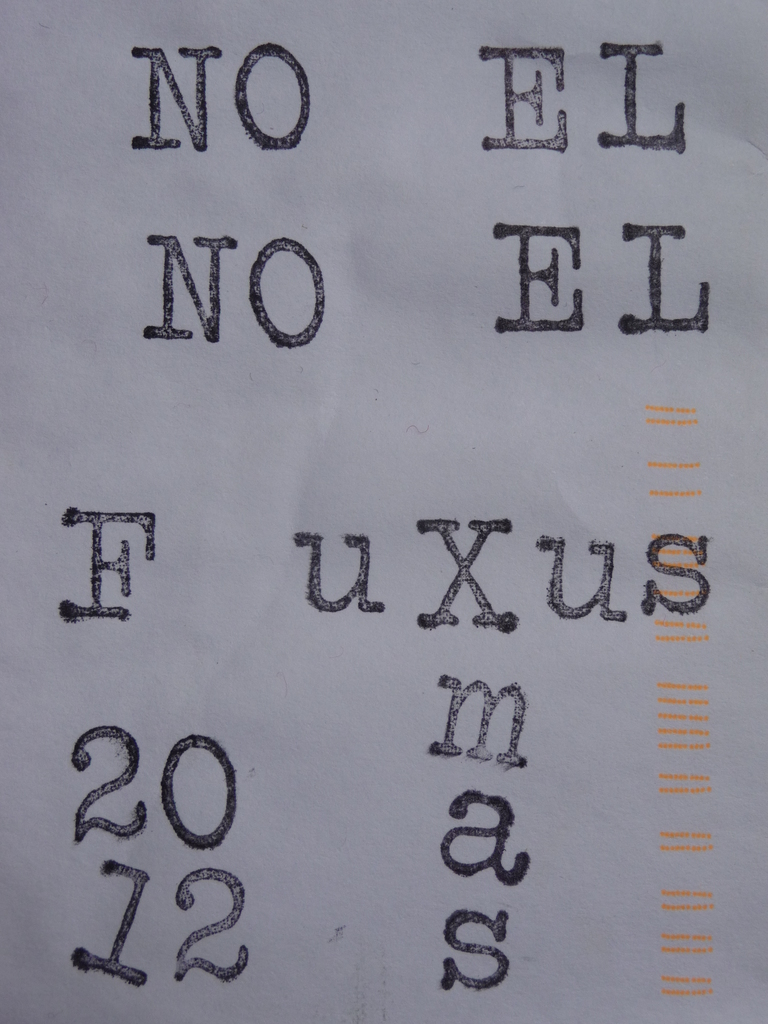 May your Xmases be Fuxus and Trashpo and Drunkpo and any other po that takes your fancy!! Thanks to everyone who mailed me this year, and to those who didn't, there's always next year! I got this sweet card today.  Snooky probably picked it out.  It came with a really cool ATC ornament which looks great on my tree.  Thanks so much Angie!  Great job!…