Oh! For the love of TRASH!

Sometimes, living on a 7 acre plot, where it was routine to dig holes and bury trash in bygone years, has it's advantages. DK wanders the streets of Elgin, eyes wide open for bits of this and that. Me, I tend to hunt in my own backyard: Piney Creek Acres.

Last week, I was walking the dog and the sun glinted off something shiny and black! I couldn't… I thought about hijacking at DK's blog, but let's make it a "C-Day" with three blogs for Carina's great mail art. 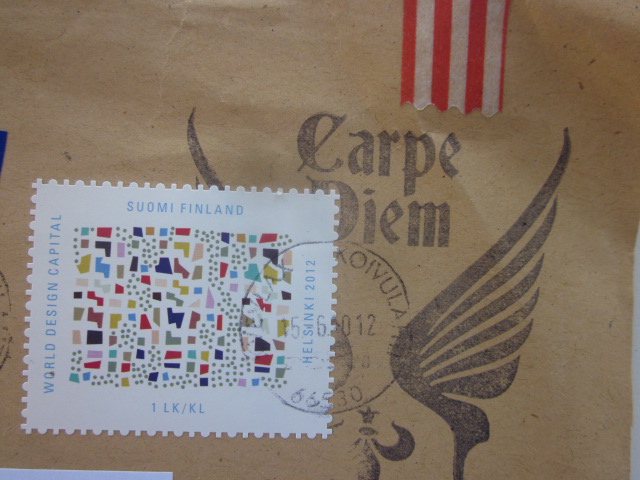 For today and everyday: Seize the Day! Carpe… 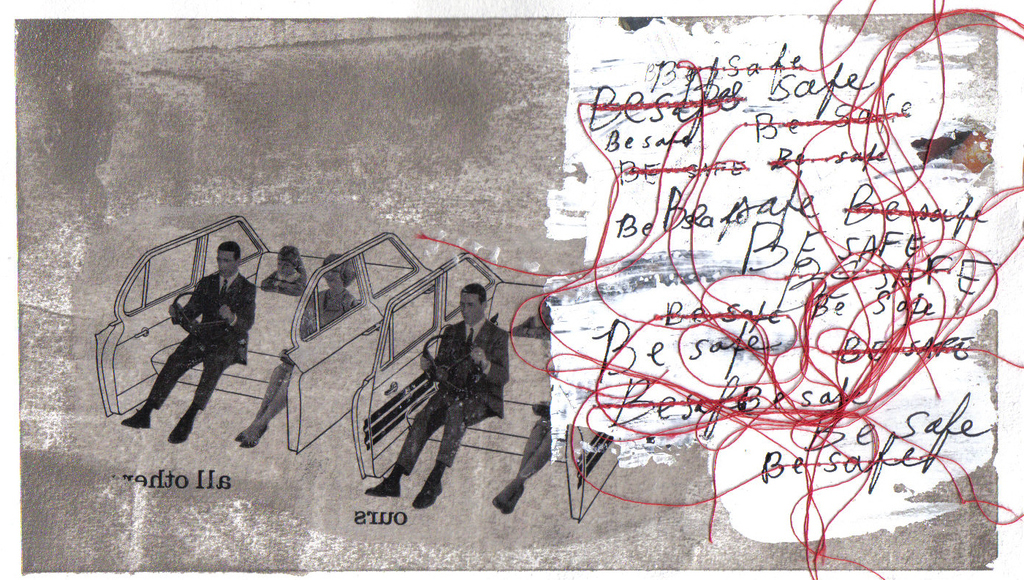 I'm really amazed by Carina's techniques. I don't know how or where she gets these vintage transparent overlays, but this piece is perfectly balanced . This is in response to a trashbook I had sent her that said "Be Safe". I love how she has worked this into her return piece. Carina is an amazing talent and each piece has her signature on it, but yet they are all so very…

On the cusp of Mayan greetings ... 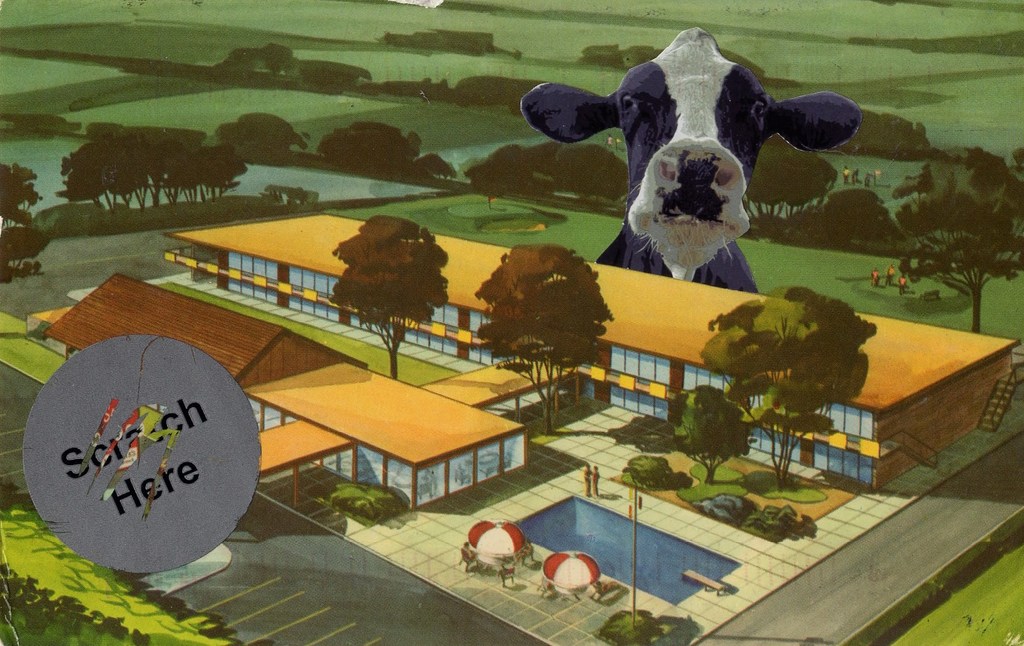 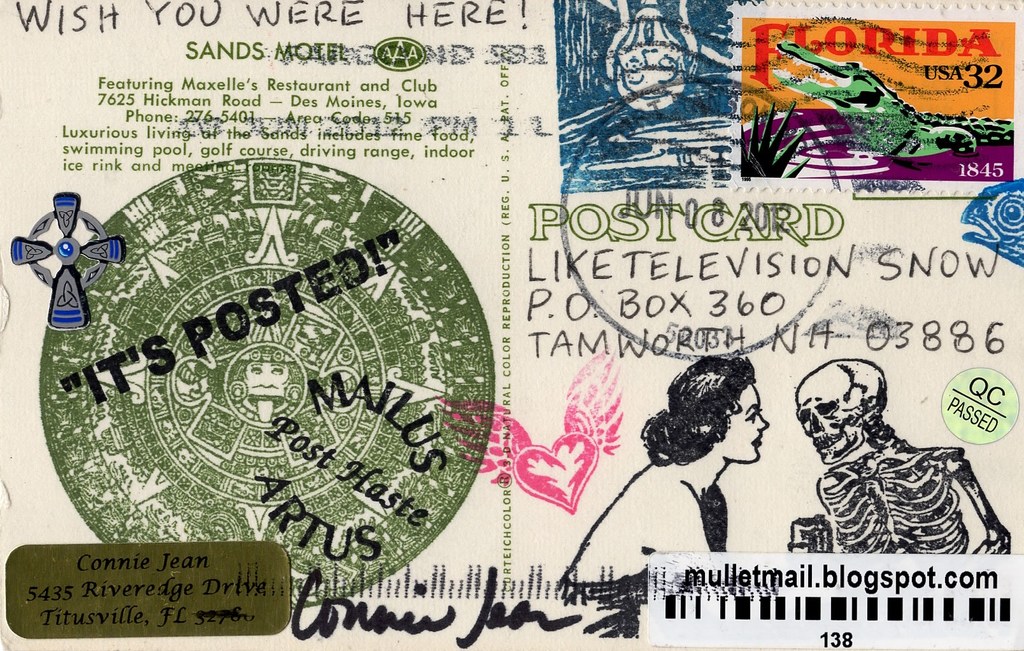 a driftwood piece ensconced in a thick piece of corrugated cardboard...a great surprise from Mike *!* 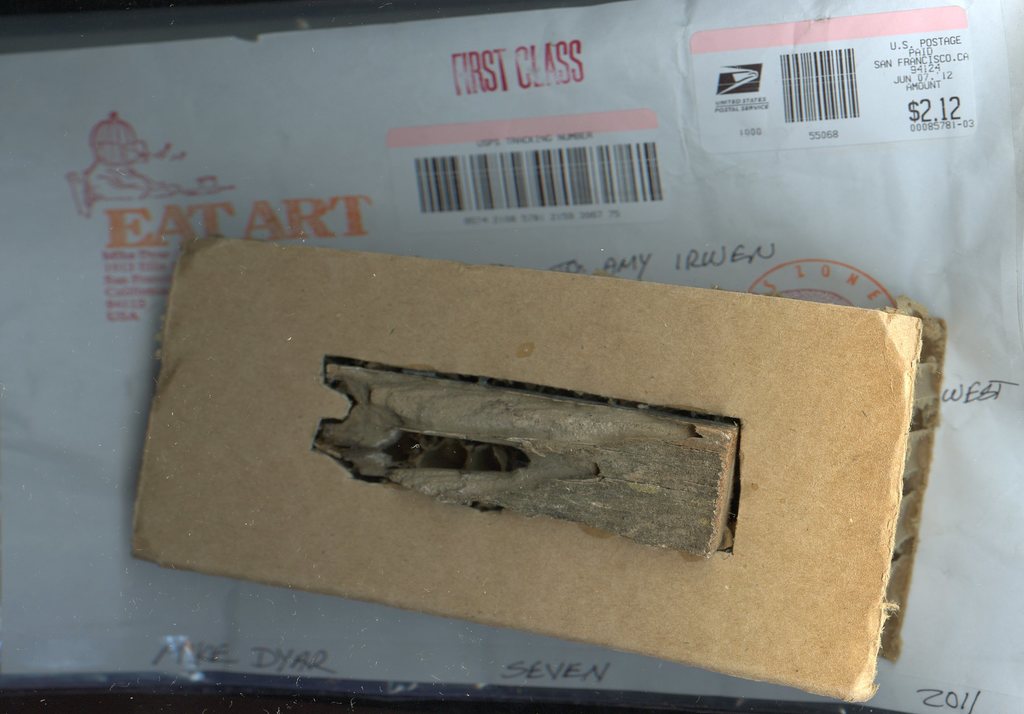 Mr. Twig and his Big Step, the Mr. Twig Studies, his artist's vision, and his artist's as-yet fruitless instructions: by David Stafford, who has the patience of a saint

David sent me a huge box with the incredible following items back in March. The tale's main subject, Mr. Twig himself, reveals a tentative but brave grace as he starts up David's watercolor-painted stairway into a cave marked The Secret of the Ages: 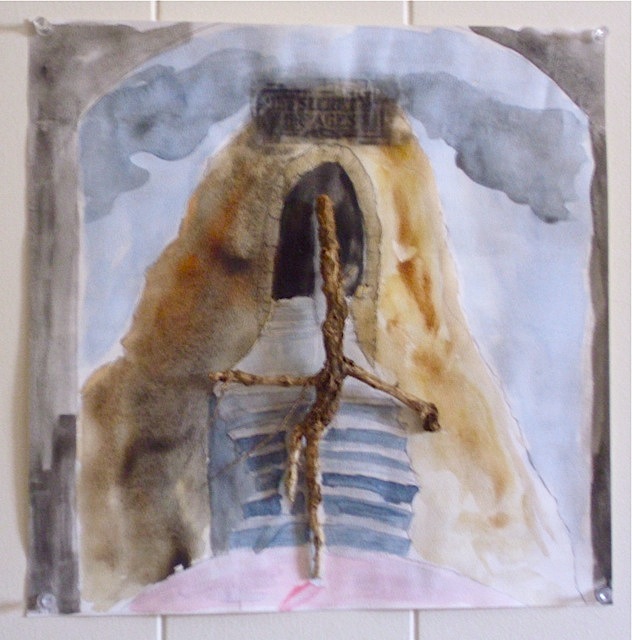 The painting is 14"x14", and Mr. Twig is haptic. He is real and strokable. And he is on his way up into something many of… 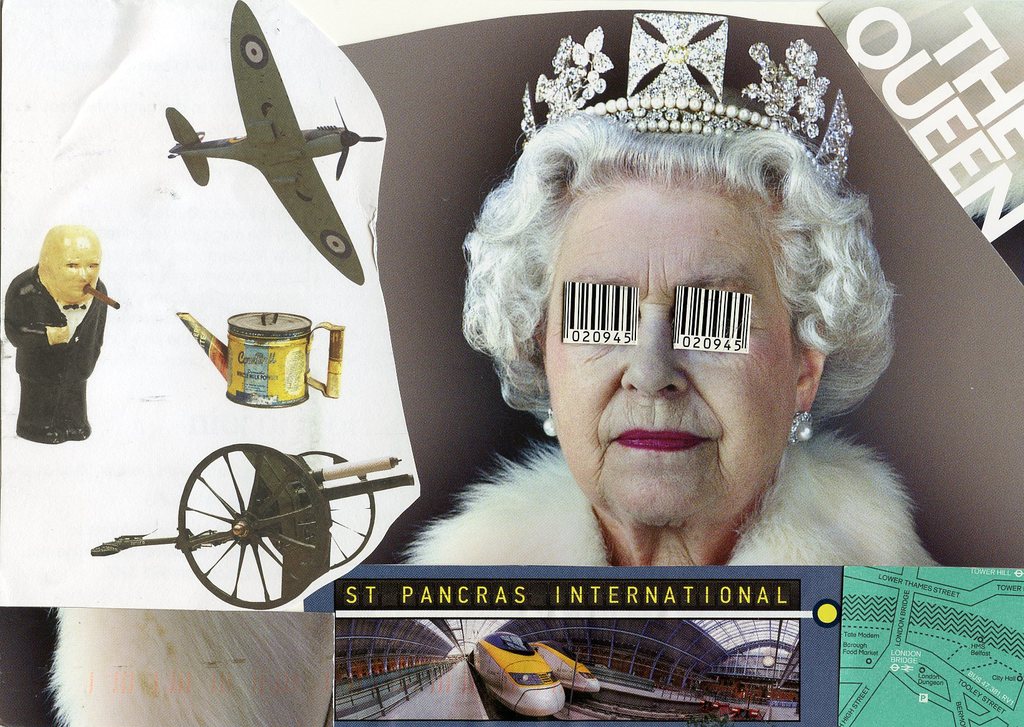 the Diamond Jubilee for the Queen Mother....Dean sends mail art while on the road...how does he do that? I would have to bring my entire kitchen island plus have a portable sewing machine!!  Hats off to you Dean *!*  why does the Queen have bar…

At the Royal Concert Hall by Guido Vermeulen. Belgium.rcvd 06.15.12

to me, I see a "Monster" that has engulfed the Concert Hall *!* 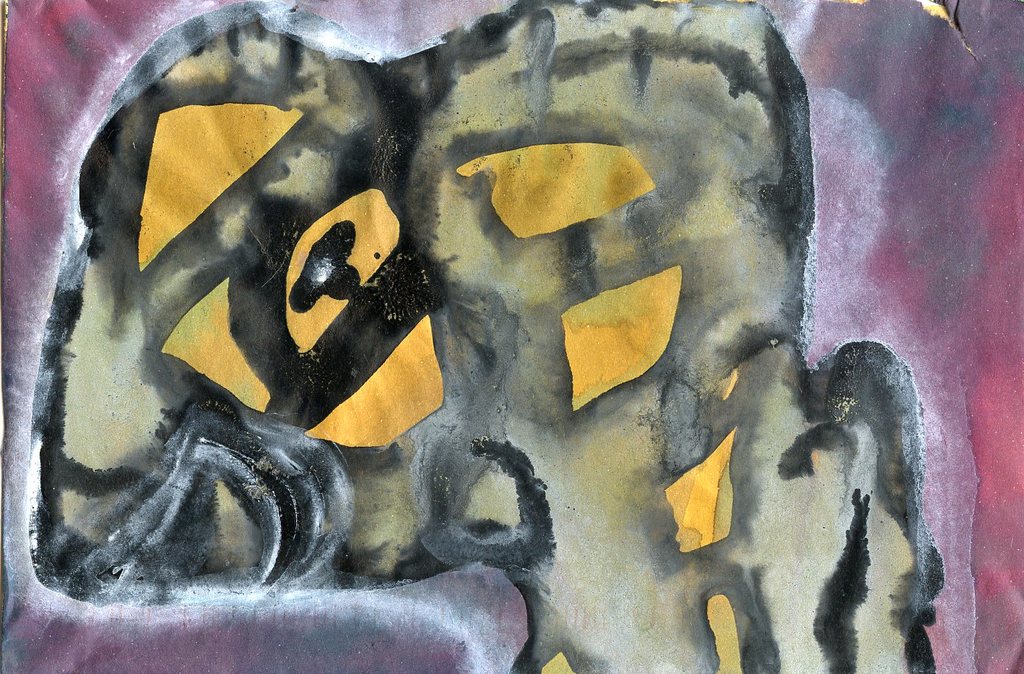 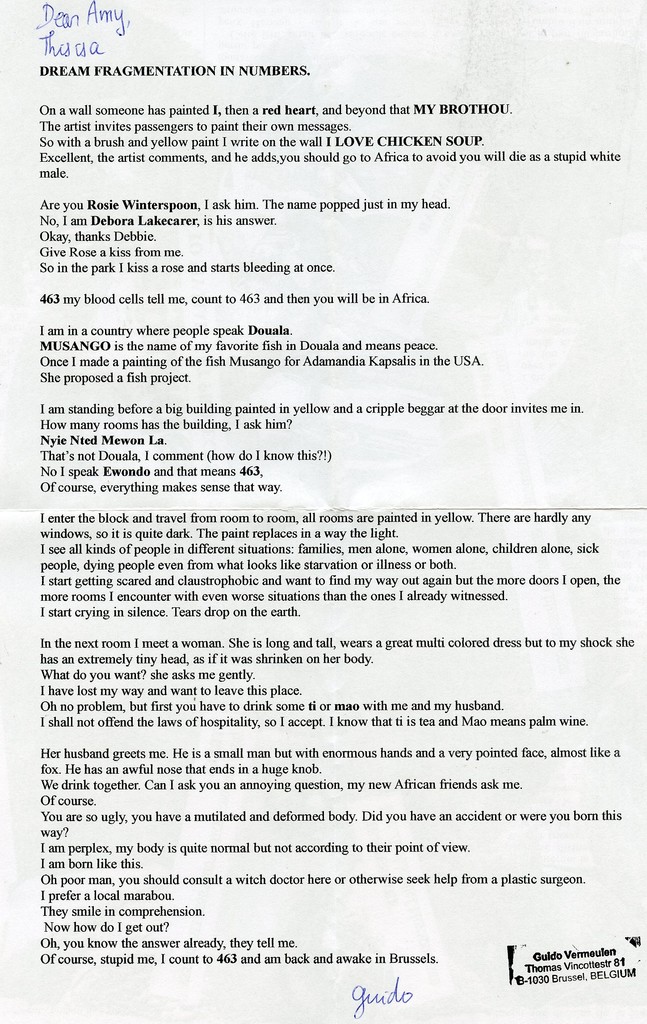 "It could be a dash pad because it happened so fast." Nancy claims these were papers, acetate, book pages, etc just thrown together, punched and tied with a string. Nancy Bell, you certainly have the 'knack' for throwing things together.

Artaeological ruins created this beauty reminiscent of an ancient hand fan, very cool. I love it. … Stephanie Blake and the Invisible Tower

Okay, the invisible tower is a stretch but bear me out here...Remember when you had huge CD towers poised like monoliths around your stereo? (Remember using the word "stereo?") Well, gradually and not so gradually those towers have been disappearing, fading into the limbo of orphan technologies. And there...is your invisible tower which is what Stephanie has condensed into one piece with multiple purposes: 1) archiving not just the covers themselves 2) but more importantly the experience of…

Carina Granlund asks, "Are You Pretty?"

You better believe it!!!  But so, also, is Carina's amazing artwork sent to me! 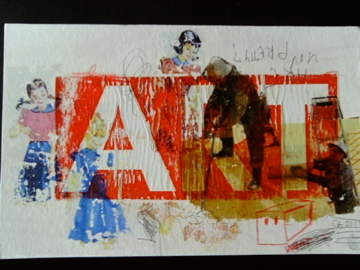 This is definietly a mixed media piece. I think it is collage with quite a lot of tape-transfer technique imagery.  But there are some hand-penciled embellishments, too.  Overall a stunner!  Thanks bunches,…

This piece is a response from Lesley to a New Yorker article I read and sent to her about figure drawing.  (Lesley is always terrific at working on a theme or quotation that we happen to exchange back and forth--she is a great art conversationalist in that sense!) I suppose this piece of mail art could have been included in my post of recently received Book Form artworks, because it is an accordion-style piece. But it works as a single artwork when opened up as well.  It's hard for…

Several have been received of late.  The most miniature example of the collection was a brilliant one from Sally Wassink (California, USA) and arrived in its own minature envelope...… 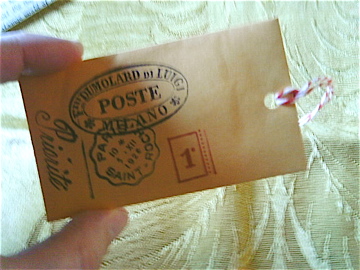 A Girl from Kloof

Lesley Magwood Fraser and I have a little dialog going about art, what it is, whether we can legitimately call all our creations art. On the days when my meds haven't reached stun I tend to be less sanguine about my own projects. Lesley, on the other hand, is filled with the hopefulness that Kloofians are famous for. To bolster her argument she, like Katerina before her, quotes Warhol to good effect. One thing is clear, Lesley's drawings are chuffworthy. Like most Kloofites she profits from… Thom Courcelle sent a rather informative envelope, you should read further on if you also are used to the strong need to get rid of your clothes... 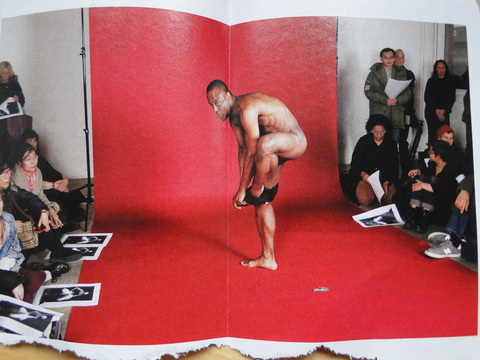 I love the stamp, looks so great! Thank a lot, Thom!!

(Vistiophobia: being afraid of clothes ...… 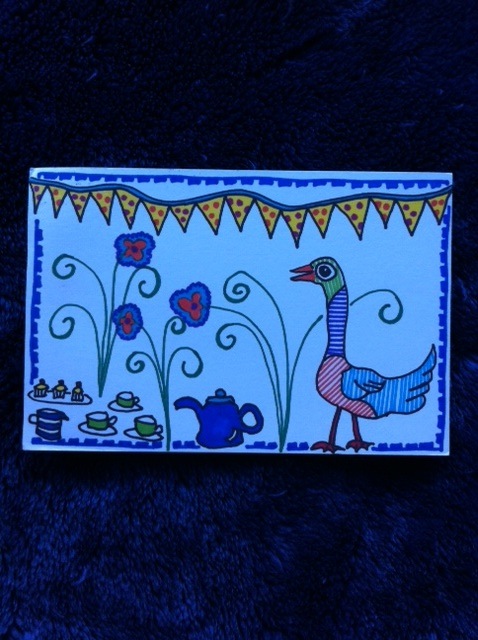 Thank you Stripy Goose for #78/365 'Waiting for the tea party to start'. What a great idea to make a series for every day of the year. Good luck with the other uuuuh... 287.

A beautiful double-sided work from cheryl!

I'm so late in posting this.  And hopefully I won't screw it up since this is a first. Katerina and me love blue with a passion. This is another great piece for my i-am-collecting-blue-mail-art-collection.