Ok - I got a word - a LARGE FLUXUS WORD from Ruud - an EXCLAMATION word - know what I mean? My task I  believe is to promote this as a word and determine meaning for this word. Promote - tick - I'm starting a Group.  Meaning - tick - ZALOP means "ABSOLUTELY NOT NO WAY NEVER NADA NIX". It is to be said in an EMPHATIC…

A Blog for Marcia Cirillo - Lost in Transit.

O dear sometimes this happens? A kind of ZALOP (see next blog) envelope hits your post box.  I received this from Marcia Cirillo: I didn't need to open it - it was already open, frayed open. January 7, 2011 - Jon Foster has been producing what are, IMHO, a series of tremendous mail-art collages recently. Many of them are on… Most of you will recognize the text painting that characterize Ben Vautier's art ( "L'art est inutile. Rentrez chez vous" - art is… Continue 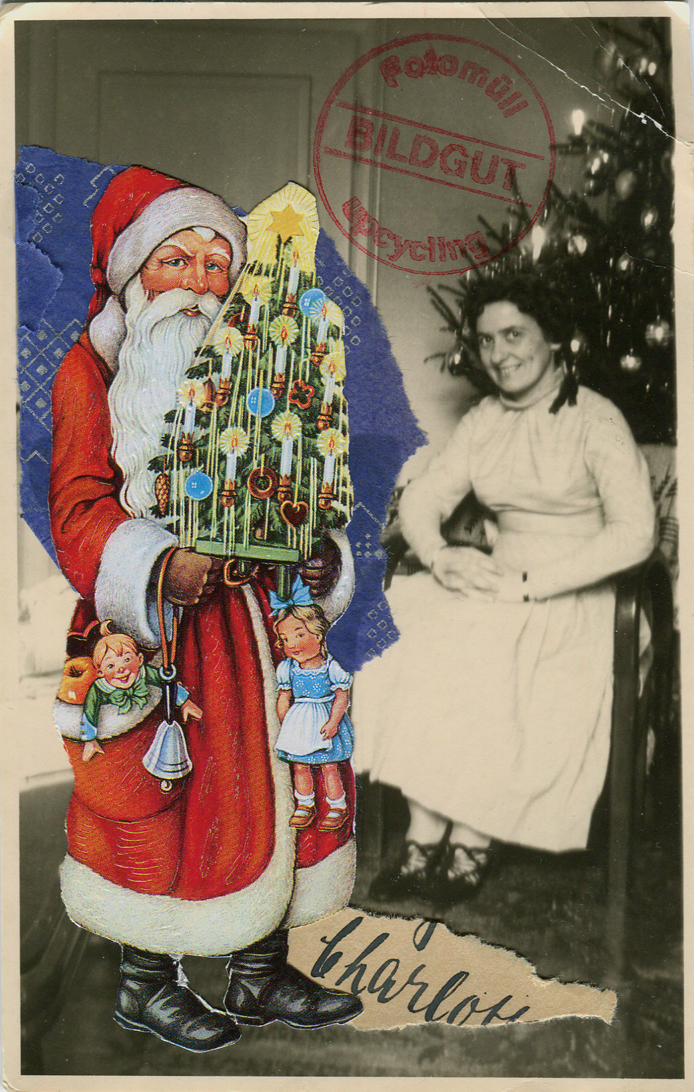 Yara-Colette's snail has brought me a delightful piece of Berliner Christmas. Warm and cosy with this big smile under the Christmas… Continue 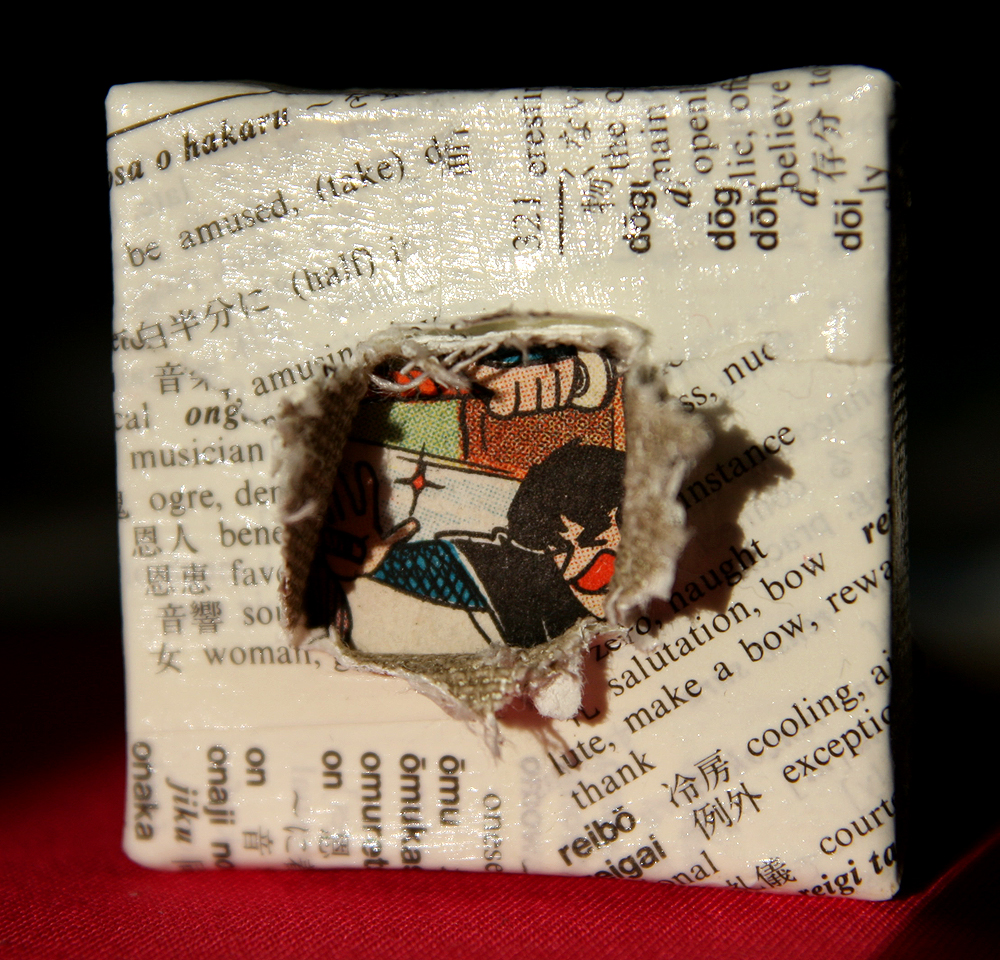 Here is a tag featuring a painting of a Freshwater Pike called "This is the one that got away". You may not be able to tell from the scan, but it is painted with a metalic paint that realy makes it come alive. Also it arrived in a great envelope.… 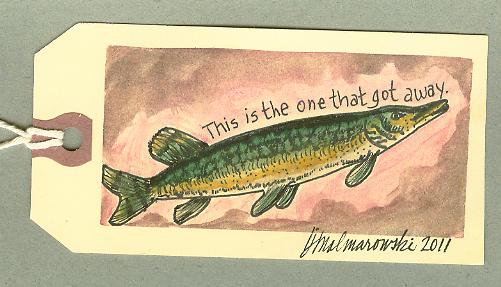 It has been a whack of a mail week from Angie Cope – FAB! I received her Alpha Man which I have seen alpharing around IUOMA, strutting his stuff. Angie kindly forwarded this from a local newspaper as I think the sculpture on Lake Michigan is fantastic.… Back to blogging and mailing!
This is an envelope I received before the holidays from Carla Cryptic and it contained... my own profile picture stickers! How sweet, really. I like what you did with this picture, Carla, I will use them for sure. Thanks for taking the time to be so creative!…

Holiday greetings from Katerina Nikoltsou! This is number 23 of project 365. Still such a long way to go... I am really admiring the stamina of the "365 people", I could never take on such work and stick to it. …

The PGCE Secondary Art and Desgin MailArt group has beenset up in response or rather to counter the online networking communicationthat prevails in all workplaces and institutions of education and is inspired(ironically) by Andy Hoang, E learning advisor and artist, who is involved in awider global mailart group himself.

The aim of the project is for students to keep in… This is a delightful and hilarious surprise and - very witty :)… Thanks for this swinx and for sending My First Journal to me - epiphanies a-plenty ! 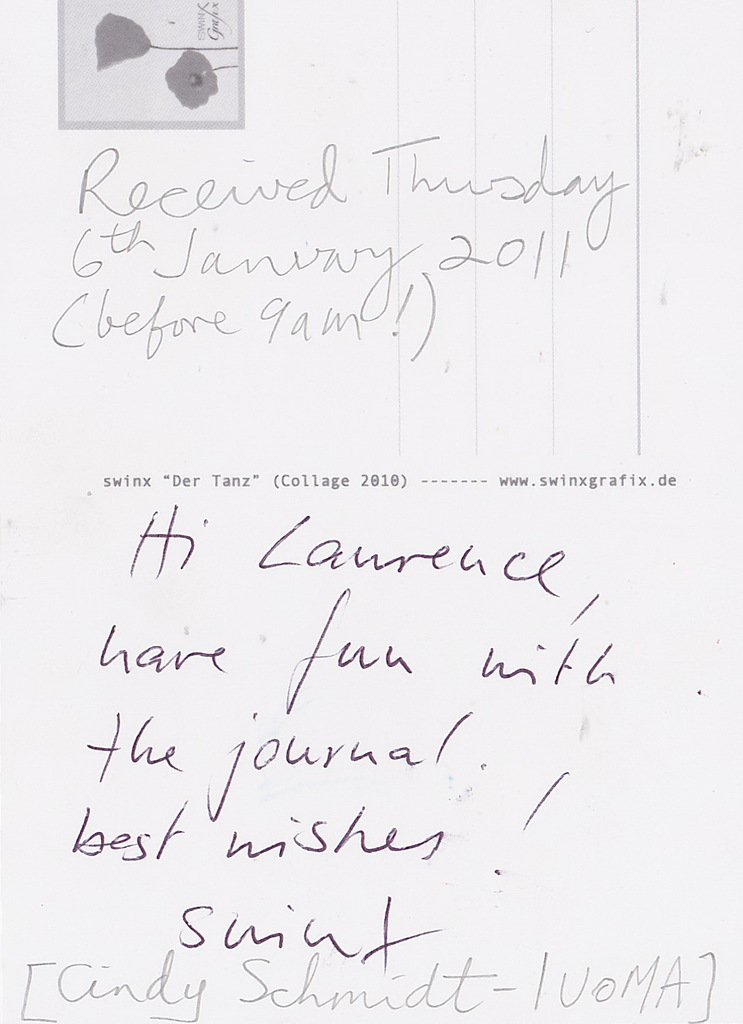 When I press to write a blog it is not down-loading the 'programme' to enable me to add pictures.

I don't know what to do except keep trying - but for how long. It used to be fine.  Also the same thing sometimes happens when wanting to include an image in a  pm.

Any thoughts / help appreicated (I wasnt sure who or where else to ask).

When people send me ma I like to include…

Intriguing work from Rani in Minneapolis 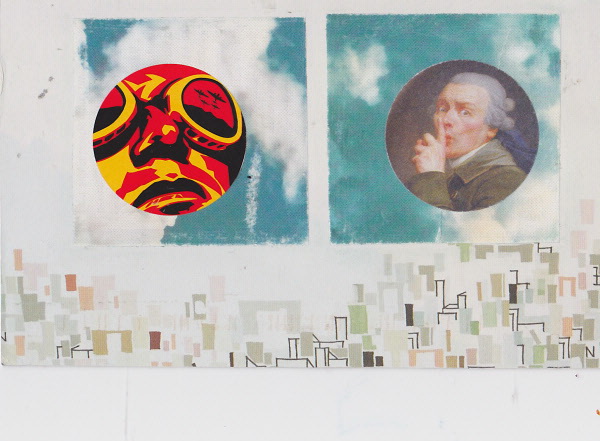 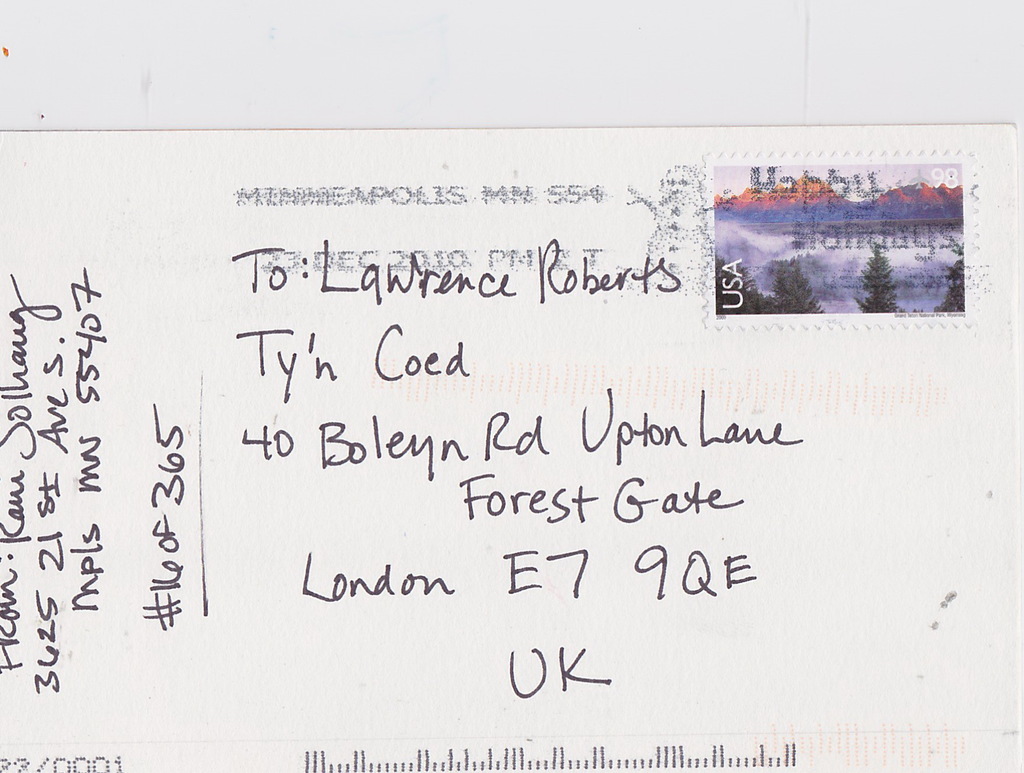 Chucked through the atmosphere by Jon Foster, USA--The Blue Planet 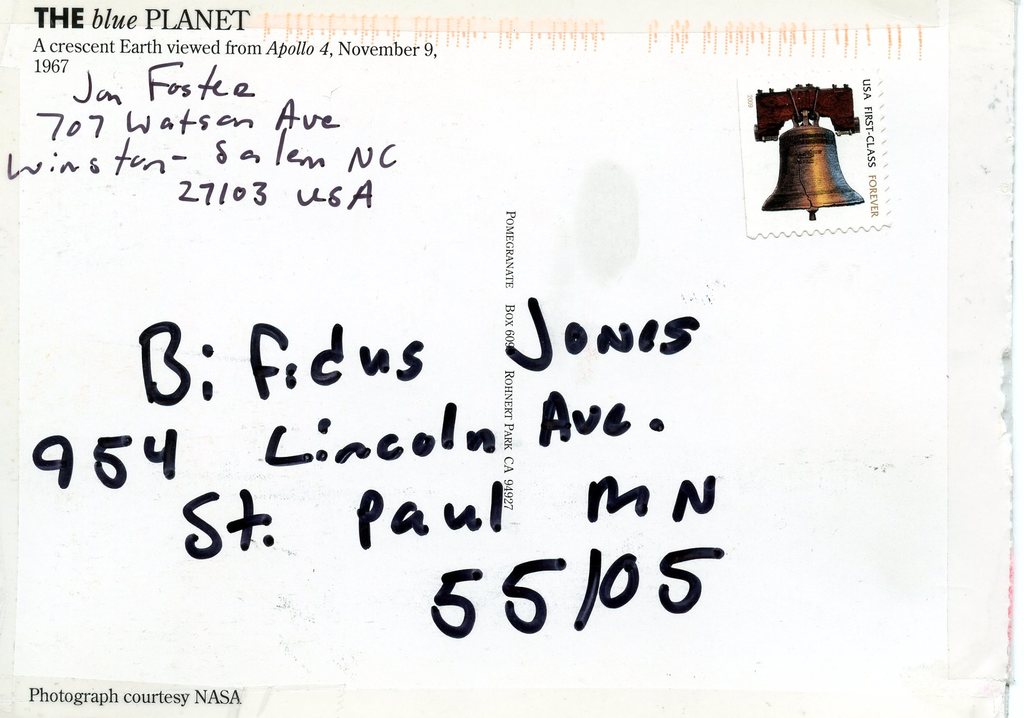 The tape n peel technique continues in this nifty mail art by Jon. He used an old NASA post card whose title and description lends a cosmic tone to this piece. I like the text and the muscles melded in there, and not a speck of blue to be seen. Gracias Jon…

New Year 2011 brings BEAUTIFUL BIRD from Ahmet in Turkey! Many thanks, kardesim! and envelopes with holiday greetings and stamps, too Always a treat to have mail art from Izmir, Turkey! 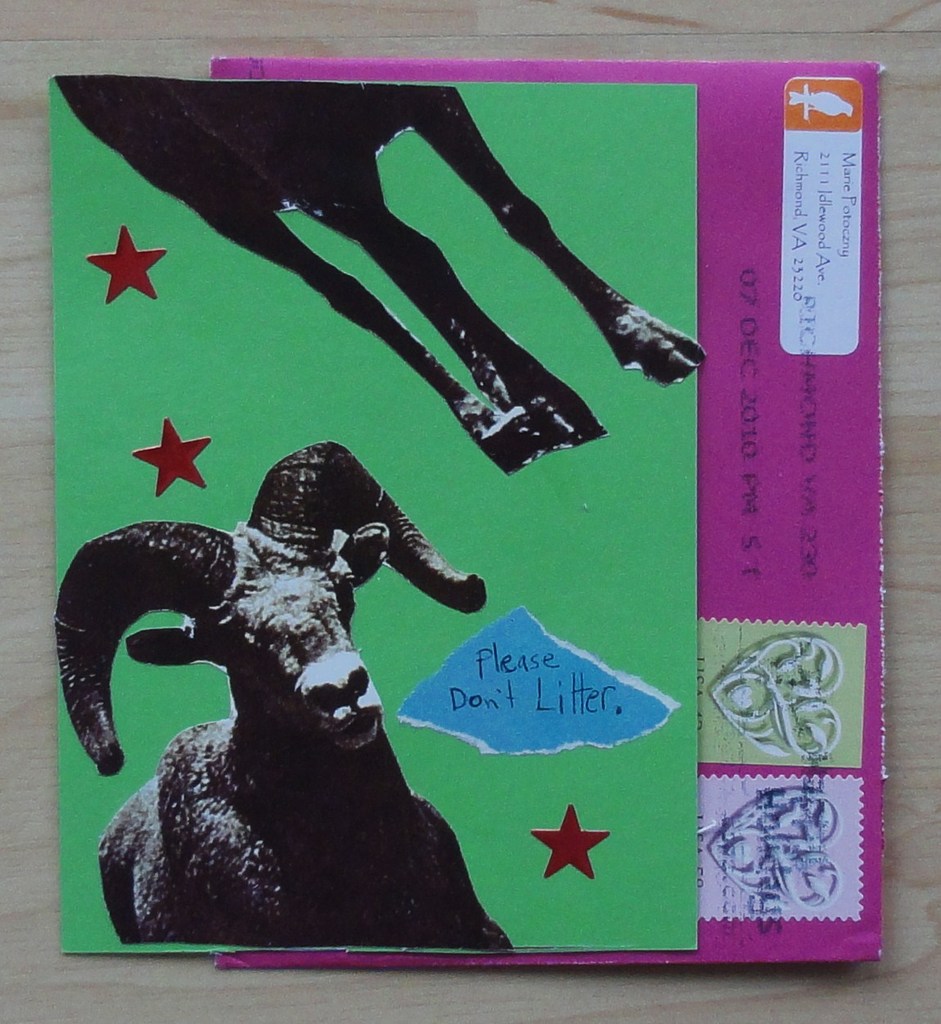 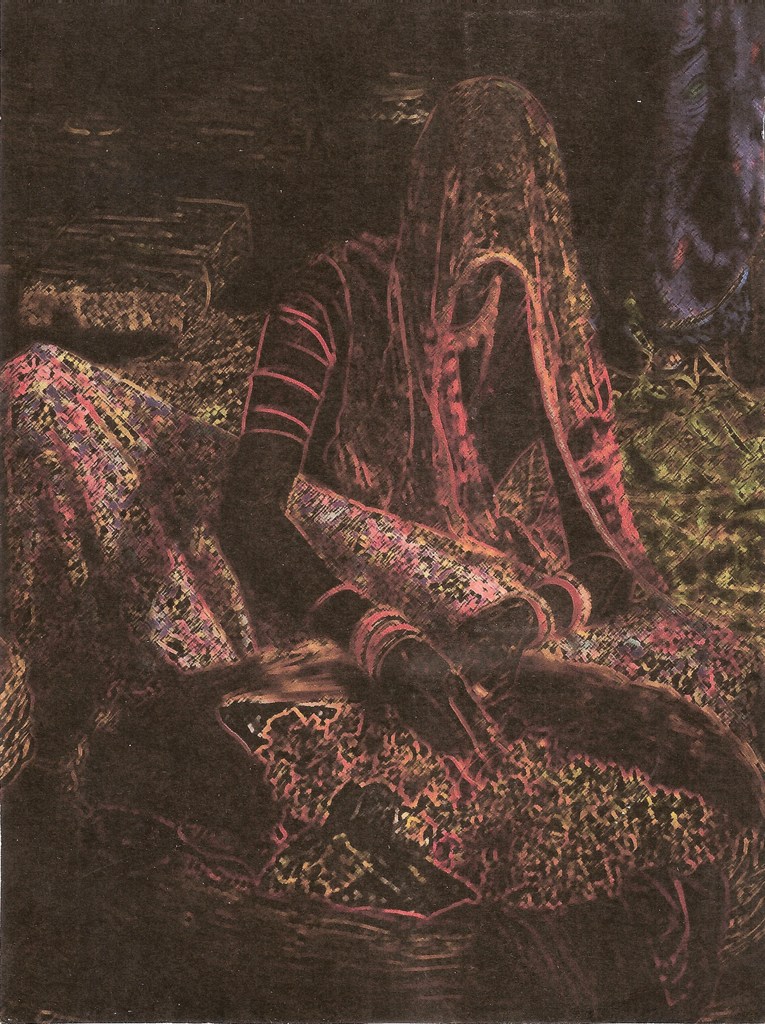