one [1]: the founding of a post neoist research project

You need to be a member of POST NEOISM to add comments! 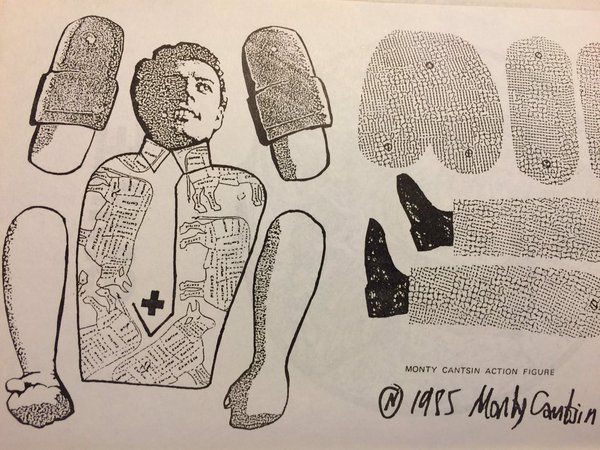 RJ : Well, the things you write down now reveal already a part of the 14SM. What ever happened to Dave Zack?

AA : Dave Zack, now, that glittering guy. There are times when I think he was the most wayward-tragic-doomed figure I ever met, and other times when I think of him I can't stop grinning. (Hm, something not quite right about that last sentence, but hopefully you get my drift.)

"It doesn't make it if my postman doesn't get it," Zack would mutter, shuffling toward the mailbox, his arms overflowing with envelopes, each day's astonishing, and astonishingly arted, output.

"This is this," and as he moved, things would drop from his beard and shaggy jacket: cookies crumbs, flakes of gold glitter, twigs and old leaves. When it came to grooming he was a sort of latter-day Swamp Thing.

RJ : It is always good to hear that someone feels he had a 'lucky run'. At "The Online Blaster - Meanderings of an American Ling Master" the text about you starts as: "A master of pseudonyms and of schizophrenia,...." How far do the pseudonyms influence you?

AA : Here again -- for me -- the use of pseudonyms is something that goes back to my first early fascination with the pulps. In the old days, when a pulp mag used more than one of a writer's stories at a time, it was common practice to put a different byline on each story -- this helped give the reader the illusion he was getting more for his dime. If a writer was at all prolific -- and some of those guys, like Kuttner and Woolrich, were singlehandedly writing entire magazines -- he very often found himself operating under a half-dozen or more pseudonyms. And somehow this was a convention that held a lot of romantic appeal for my younger self. Probably because of its shady, less-than-honest aspects, the multiple-name dodge became in my mind a sort of cicerone or ideal. Years later when I began doing mail art I carried the idea of using multiple names over into that. The fact that the mail art network had long favored the use of weird and intriguing pseudonyms -- Dr. Brute , Anna banana, Rain Rien, Andre "The Scientist" Stitt, Art Tar, etc. -- seemed made to order for what I was up to.

I started out mailing under the name of "Blaster Al"-- and I was also "Mrs. Blaster" and "Leonie of the Jungle" and Ralph "$50,000 Party" Delgado and the critic Ernst Stroh-Symtra (to get what "Stroh-Symtra" was about, read the name backwards) and Eel Leonard ("The Newark Cannibal" -- don't ask him what he had for supper) and Glans T. Sherman and Jana Peruda and Emergency Room Metcalf. (The last named mail art phantom was also known as "The Bleeder" because he suffered from hemophilia and could bleed to death from the slightest paper cut or prick from a postage stamp) plus quite a few other colorful and bogus handles I've mercifully managed to forget.

Along with all of this there were the different club names - Clark Ashton Smith Fellowship Chaper, Scientific Electricity Foundation, various incarnations of Gnome King and/or Kink Club, among others, and, later, when things went really out of hand, the Harry Bates Club scams done in collaboration with Gene Laughter and Lon Spiegelman. It was fun. Eventually the Harry Bates Club doings became so twisted that it would require a whole book (some would say a lengthy court deposition) to detail all that went on, including the postal inspectors being called in to investigate charges of "menace" and the seeming establishement of Pepeland, a top-secret Harry Bates clinic for maimed and crippled pets.

You mention the Ling Master -- that name came about because I had promised my pal R. Kern a story for his magazine DUMB FUCKER. That first story was called "Confessions of an American Ling Master." I did others. Ultimately, Ling and his mystic pillowcase hood with the single eyehole went from being a character in a series of stories to a pseudonymn I adopted as part of a mail art offer ("LING ANSWERS ANY QUESTION FOR $5!"), something I was hoping would generate a little extra income. As it turned out, Ling was one of those creations that become somewhat autonomous, and go on to lead a life of their own, meaning that as time went by, the Ling persona was picked up and adopted by a number of people who started using it for their own agendas. For instance, there was a seriously distubed man in London who went around calling himself "Young Ling" until the police stopped him for questioning and found all sorts of unspeakable floatsam taped to his body. More recently, Steve Sleaze Steele's Provident Hot Check ....

Comment by MISS NOMA on August 17, 2015 at 3:49am
ZACK SPOTTED ON LONDINIUM UNDERGROUND/STOP/HE WAS
RIDING THE CIRCLE LINE/STOP/
OUR FAITHFUL REPORTER DID
NOT APPROACH HIM BECAUSE
& EYE QUOTE /"HE LOOKED WILD
& HAD A MAD GLEAM IN HIS EYE"
UNQUOTE/OVER&OUT

I have always wondered what Ray Johnson thought about Neoism. I have yet to find any record other than David Zack calling RJ "the meanest man in mail art."

Zack also claims that when he was in NYC to meet RayJo, RayJo had him [Zack} kidnapped, confined in some sort of a huge tower & beaten by a very large man.

Mark Bloch is also as good a source as any: