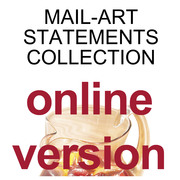 Beginning 2009 I published the book "Mail-Art Statements Collection" in which I collected all my writings and statements connected to this topic in one book. Roland started a group to circulate a booklet. Here you can directly publish your statements

You need to be a member of Mail-Art Statements to add comments!

Comment by Daniel de Culla on January 27, 2009 at 6:16pm
MailArt is Yes O You & Me Me & You sitting on the sidewalk our boxes sleepingcards, etc. all around standing slow up & asking if I'll know you & you flooring shakind hands because the fine Mail is here Art I really Mail, and it is a great good to see, and sit, speak, rap & laugh the few hours we did. MailArtellui-a¡

OLDER NETWORKERS
1. In lots of books and magazines, the start of mail art is always indicated with the New York Correspondence School (NYCS) by Ray Johnson. Even in a very new overview of modern art, published last month here in Holland, they mentioned Ray Johnson, mail art, and how it started, etc. Mail art made it into the art-books thanks to the death of Ray Johnson.
2. Some mail art networkers from the start don't live anymore. Ray Johnson, Ulises Carrion, Robert Rehfeldt, Cavellini, Michael Scott, Guillermo Deisler, Robin Crozier, Dick Higgins, Edgardo Antonio Vigo,, etc.. they all have died already. And then the writing of history starts without the artists being able to react on the writings.
3. Some older networkers quit the network. They devote themselves now to other art forms, or have taken up other jobs that don't allow them to be a networker on a large scale anymore. But most look back at a time of pleasure and play. That is what mail art is all about.
4. Sometimes the mail artists are divided up into generations. The first generation; Ray Johnson who started in the NYCS with a selective group he chosen to write to and asked them to play the game with him. Of course there is also the zero generation. Artists that already used the mail system for communication, art & play (Marcel Duchamp, Van Gogh maybe?) where individual artists were in contact with other artists through the mail in a creative way on a one-to-one basis. The second generation in the 60's - 70's when FLUXUS joined up and a selective group experimented with the mail system, the third generation where mail art rapidly grew in 70's - 80's because of the exhibitions and publications within the mail art network that spread the news to newcomers (this is where I joined the mail art network for the first time, and lots of the people I am still in contact with nowadays are from this 3rd generation). Not a limited group anymore, but the concept that anybody could take part and be a member of the mail art network really took shape. This lead to the Congress-year in 1986, where anybody could organize a congress, as long as two or more mail artists had a meeting at a certain place. The fourth generation, after the congress in 1986 organized by H.R. Fricker and Günther Ruch from Switzerland, where the mail art population grew into a very large group. Every networker only knows his selective group with whom he/she is in contact. An enormous wealth of projects and publications are made in the end of the 80's and the beginning of the 90's. The end of the 80's and the beginning 90's was also the gradual beginning of the fifth generation, where communication was done with the use of computers. Mark Bloch (USA), Charles François (Belgium) and me (in Holland) already were working with BBS's to send out electronic mail. One of the congresses in the DNC-year 1992 was done by Charles and me with a session of computer-congresses where we exchanged our thoughts without meeting. Our computers were our tools. In 1991 there was also the first networking-project REFLUX that uses the then elite system of internet, but in 1994 till now the internet became a real option to communicate for the 'wealthy' countries.
5. The mail art networkers that are active today all have their starting point. Some are still with us from the first generation. Some Fluxus-artists like Dick Higgins and Ken Friedman are at the moment very active on the internet, and play with the possibilities this new network of network offers. Some mail artists from the third generation are gradually starting with using e-mail besides their snail mail, and the same goes for the fourth generation. Where someone started is quite interesting, because it shapes their view about what they think mail art or networking is all about.
6. So it is quite difficult to place a mail art networker in a specific generation. The nice thing is that every cell in the network has it's own contacts and they can differ quite a lot.

NEW NETWORKERS
7. The new mail art networkers that started in the 90's have the advantage that they have lots of material to look back on. Especially in the 80's the publications about mail art hit the network. Although the written history never is the complete story, reading these publications gives indeed a wealth of information. The problem however is to get access to the information. Not many libraries have these publications, and the many mail artists that have them in their 'archives' are quite hesitant to lend them to others most of the time. The internet is bringing a solution. More and more texts are being made on the computer. These files can be accessed through the internet. I know that a lot of networkers don't have access, but the new generation learns to use internet at College. The shift is eminent.
8. Some new networkers start to investigate what the network brings, and soon find out that the network isn't easy to describe. Every mail artist builds his/her own network around him/her, and every little or small network looks different. The own interests of the mail artists determine for a great part what kind of network he/she is building. Some newcomers start on the internet, and get in contact with mail artists that do 'snail mail' as well. The e-mail and WEB-pages will never replace the personal touch of the non-digital letter. As long as it can be afforded to send them that is. The postal rates of snail mail are increasing every year, and at a certain point people are forced to use the e-mail.
9. There are the unwritten rules in mail art that are there for the (snail) mail art projects. When you start a mail art project you should follow these rules. If you don’t take these rules seriously (like no judging, all contributions accepted, documentation to all) the network will take you seriously. However, these rules are guidelines. If you start you own project, you can make your own rules. As long as it is done openly, people can see if they are willing to follow your rules. If you don't state that there are rules, but say that you do a mail art project, the network expects you to follow the rules.
10. as strange as it might sound, the real mail art projects on the internet haven't started yet. What I read in the REFLUX-project, done in 1991 seems a good example of what is possible. But the dimension of the Internet have become too large to control any mail art project. The factor speed is a problem sometimes. I remember that I entered the Fluxlist , a mailing-list that started only 4 weeks ago. The first day I got 133 e-mails. The second day 78 e-mails. You can't seriously expect from someone to read all that and answer it too without dividing ones energy over so many small things (after the first days it became less and settled to about 15 messages a day).

COMPUTER NETWORKERS
11. in the 90's the computers have taken their part in networking. Most of it nowadays is going on the internet and to be specific, most people use the WWW (World Wide Web) which is just a part of the internet). The WWW is quite easily accessible with all the browsers that are available for free, and even a child can work with it without problems (once the settings are made right that is). The BBS-systems are gradually being dismantled because the inter-local calls are too expensive, and the uniform structure of the Internet makes communication easier.
12. But between computer networking and mail-art networking there is a difference. The communication on the Internet has little to do with mail art. One can discuss mail art, publish visuals and articles on web sites, but the mail art is when the postal system is used. So e-mail could be seen as mail, but the getting of data from a server I see more as going to a library. It is no communication as seen in the way communication is defined.
13. The IRC-boxes are also fun. They have to do with communication. But the thing that is so special about mail art is the time-factor. The piece of mail you get you can read where ever you are. I myself sometimes read my mail early in the morning when I just collected it at the P.O.Box near the railway station, and am on my way from Tilburg to Breda. Sitting in the train the other travelers sometimes can see me reading the fresh mail from all over the world. Sometimes it is even a surprise when I get a big piece of mail, because I then take it all the way to Breda and back again to Tilburg after a period of work, where most of the mail eventually stays. With e-mail it is different. I have to be near a computer, and I don't see myself with a laptop in the train and a phone line communicating to others while travelling. I rather read a magazine that just arrived, or read a new letter with words from a friend.
14. some people mostly do the computer-communication nowadays because of the cost-factor. Once you HAVE access, the costs for sending out electronic info is very cheap. The problem is that the things you send stay digital. Only if the receiver puts them on specific paper with a specific printing-device, the hard copy is formed. The receiver determines the layout instead of the sender (well, most of the cases it is so). Most e-mails I consider worth keeping, I always print them out on paper. In my article "mail art, networking, and internet" (I wrote that October 1995), I explain why. It is difficult to document electronic data for a long period. I should know, I am now working with my fourth computer, and the 5,25 inch diskettes I have saved from my second computer I can't read anymore unless I go to some very old computer-system and transfer it. The new systems work all with CD-ROM's, and I just got the first CD-ROM catalogue of a mail art project (thank you Guy Bleus, Belgium; now I can see in a digital way all the contributions that you got in for your artistamps collection!)

Comment by Ruud Janssen on January 26, 2009 at 7:21pm
Nothing is stopping you now to write your own mail-art statements in this online group. Do we think about mail-art differently or is there a common basis for defining mail-art?