How many of you has this happened to? Between what countries?

Don't you hate when mail is lost. Lost art. Lost communication.
And it also sucks losing a little cash each time as it adds up.

Lately I sent mail to Germany, Argentina and France that was un-recieved.
And not delivered back to sender.

Permalink Reply by Ruud Janssen on April 13, 2009 at 7:28pm
Maybe make a digital copy of the mail-art. If it gets lost and isn't returned, you can still publish it online or send it by e-mail. Not the same, but better something than nothing?

Permalink Reply by Megan Sandover-Sly (triscuitbox) on April 13, 2009 at 7:39pm
yes i often scan pieces before sending. but it's not the same intention. hehe
i always get a weird feeling when mail is printed out or not personal or digital.
like there is a lack of soul almost :s

Permalink Reply by Ruud Janssen on April 16, 2009 at 4:45pm
Yes, the original is what counts. The digital copies are just copies with a lack of the original soul.

Permalink Reply by Shivablack on April 22, 2009 at 5:44pm
It happend to me..as you might know..not only your great piece to me got lost..a real big one I´ve sent to Julian Nelson got lost..it was such a great one a tryptichon..big and..of cause expensive to sent to USA.. >:(
I really hate it..!!

it still happens. The computers that sort the mail sometimes also eat the mail (crush it actually)

I'm in the States and Mim recently on the 1st of the year mentioned that she had sent me a letter, and was surprised I had not received it yet.  I assume she had mailed it to me at least 5 days prior, so sometime just before or after Christmas.  She lives in the States as well.  At the time of this message, January 16,th, 2014, it  still has not landed in my mailbox.  I've never had one of her letters or postcards lost---so this is disconcerting.  Carmela mailed me a postcard on the 9th of January (also stateside) and I received it by the 13th.  It only took 4 days to travel to me.

I feel bad because I was thinking my postal worker was taking my mail-art, but who knows.  Maybe the cancelling machines ripped it beyond recognition, however I have to say when that has happened I receive the "injured mail" in an envelope from the postal service telling me that it was damaged and enclosing the damaged mail.  I can no longer remember if there was an apology, but it was understood.

The worst part of losing mail is that it can never really be replaced.  Your mail art friend can send another, but since each piece is unique, there will never be another like it. There is that sadness of having lost something you never had, but then again, we have to understand, that this will happen from time to time. When it happens a lot, then you start to have suspicions that something is going on and you're left wondering what exactly.  And then there is always the hope/expectation that it will "eventually" turn up.  At least that's me.

I guess the best thing to do is to try not to obsess about it (like I do) and make more art, but if you feel your mail-art is being stolen or intentionally lost, you may feel frustrated and wonder what the point is.

The only thing we can do is to ensure that are items are addressed properly, legibly, and that if we use labels that they are on securely.  Aside from that maybe sending them off with a prayer that they be reach their destination.  And yes, it would be nice to have them "returned to sender" if they are undeliverable.  Lo siento Megan, ---I feel your pain.

To me it has happened several times. My lost first mail art was a drawn Smurf which I sent from the Netherlands to my dear Post-pal in Spain. Fortunately I had scanned it, and could send her a copy (with a personal message, indeed 'less soul', but still personal). All my other mail she has received well, I think, except for one other, weird piece of mail: a cut-out of a plastic grape box lid (which happened to show her name, reason for me to send it). This cut-out mostly was transparant, so probably not detected well by the postal machines (I hope it won't have damaged any postal machine...).

Other lost mail art pieces as far as I know: one to Brasil, one to Romania. Probably more, but I won't know because not all receivers notify me that they have received my mail, and not all receivers have a website to show it.

I don't mind it when my mail art gets lost in post. That first time I was very disappointed, a little shocked even, but then I realized that it's part of the game. The challenge of letting your mail art go, freely into the wide world. Like we ourselves went into the world, our 'children' have to find their way by themselves, too.
And I even consider it a compliment! I imagine that someone has found (or maybe stolen) the mail art, and that he/she liked it that much, that it now has a good place in the house of someone, who otherwise maybe never would have had Art hanging on his/her wall.
Easily accessible art, isn't that the spirit of Mail Art, too?!
(I know that mail also can be lost completely, in a thrashbin, but I prefer to dream on :-)

Furthermore, there have been several postcards lost, too, which I had sent out via Postcrossing. To Lithuania, China, Russia, Germany and more countries. In that case I send an other postcard, and so far the second (one time: third) attemps have succeeded.
On the postcrossing-website you sometimes can see how many cards sent by a postcrosser have been lost; some postcrossers who don't do a second try, write on their profile page which of their sent cards, and to which countries, have been lost ( 'expired' in postcrossing language). Interesting to see, I think.

It indeed costs a lot when much mail, including postage, gets lost. However to me postal things have a large priority in my life. That means, if I can choose between buying new stamps or new clothes, I prefer (and do buy) the first. (Fortunately the people around me don't mind me seeing wearing old cloths and elder shoes :-)
And sometimes nice things happen: people who do efforts to send me mail in a second attempt, and recently a shop keeper decided to give me a beautiful postcard, when I told him that the previous one hadn't arrived.

On the contrary of lost mail, I'm sometimes very much surprised about the mail which indeed arrives while I didn't expect it. E.g. a piece of wood, or a coaster without envelope, both too small according to the mail regulations. Arrived! Safe and sound, and in time!..
And a CD on which I wrote the address and sticked a stamp, and which I sent 'naked', which then was protected/put in an envelope by the mail company, to arrive well.

But you forgot to mention: that lost Smurf was the very first piece of mail you tried to sent to me. It never arrived, and, still, I never thought you were one of these mail-fakers" :D 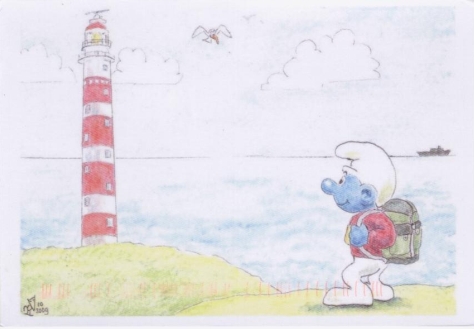 (and despite the loss, it was the start-off of, er.... how shall we call it... lots of arriving mail, in both your and mine mailbox!) 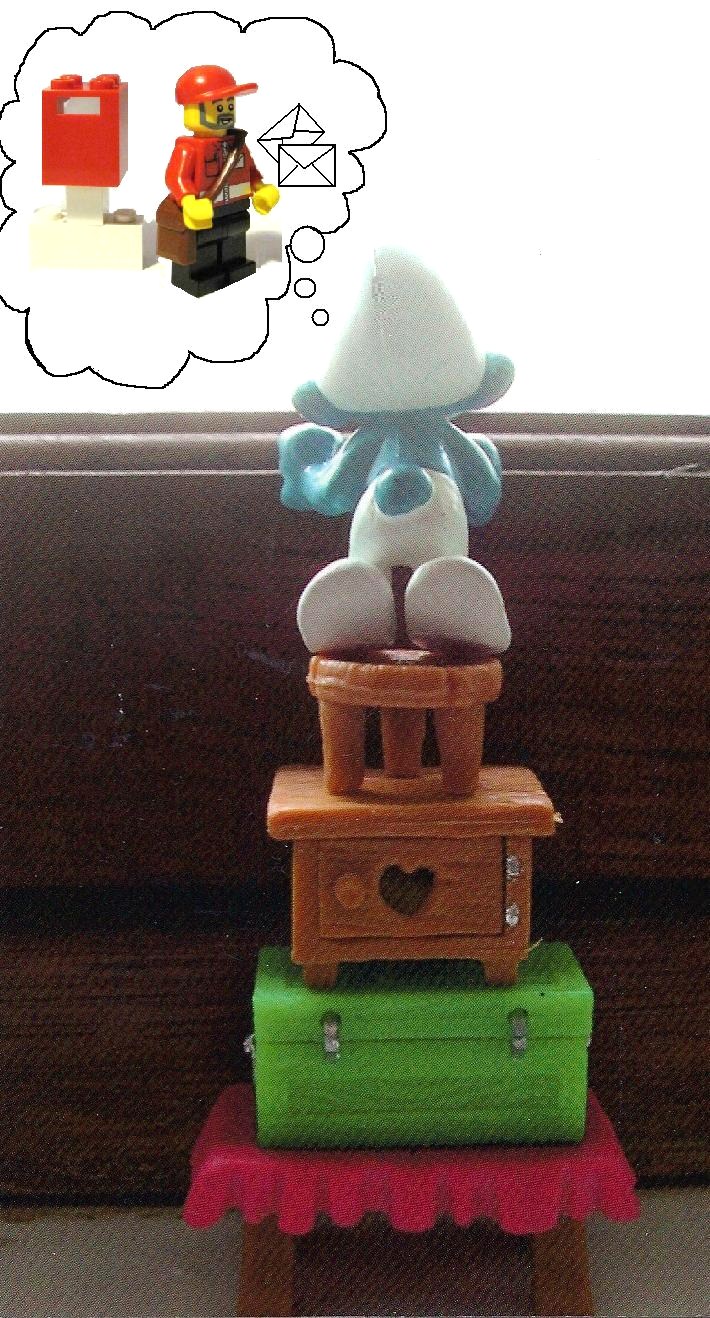